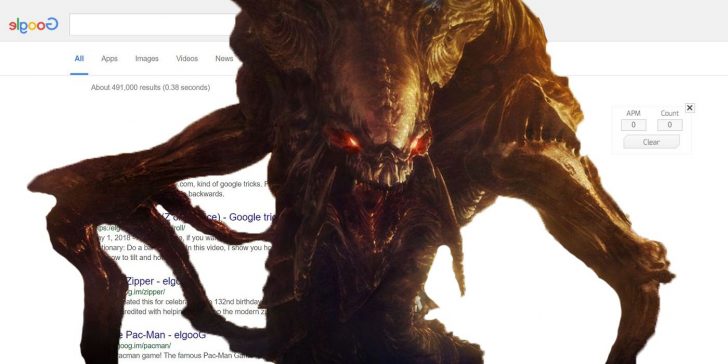 There’s a StarCraft Easter egg hidden in Google search and when activated requires you to race against time to avoid a Zerg rush defeat.

There’s a hidden StarCraft Easter egg in Google Search which lets the user perform a Zerg rush on the results page. Like many other Search-related hidden games and features, this one was released some time ago. However, it is still alive and easy to unlock, when you know how.

The original StarCraft game was released by Blizzard Entertainment in 1998 with the real-time strategy game immediately proving popular and going on to set the tone for the StarCraft games that would follow, including 2010’s StarCraft II: Wings of Liberty. A staple of the games is the Zerg, insectoids that have the ability to mutate and assimilate. While they are weak individually, their strength comes through their swarm ability which often results in enemies quickly becoming overwhelmed. An approach that’s often referred to as a ‘Zerg rush’ or ‘zerging’ and one that’s no longer confined to the world of StarCraft.

The Zerg rush Easter egg was officially added to Google Search back in 2012 and could be accessed simply by performing a search for ‘Zerg rush.’ In spite of the years that have passed since then, the Google version of the game is still accessible and available to play, although there have been some changes to how the StarCraft game is accessed and works. For example, players used to be able to share their scores on Google+. It was a novel idea, but with Google+ being shut down in 2019, that feature is no longer available.

How To Do A Google Search Zerg Rush

As is the case with all Google Search Easter eggs, the process begins with a simple search for the main phrase. However, getting the search right so that it activates the Easter egg (and doesn’t return a normal search results page) comes down to how the search is performed. For example, if you just search for ‘Zerg rush’ normally then all that will happen is Google will generate the standard results page for the phrase. At the top of that page will be a link to the game. Clicking will activate the Easter egg. However, if you want to do it properly, then the trick is to go to ‘google.com,’ type in ‘Zerg rush,’ and then click the ‘I’m feeling lucky’ button and not the usual ‘Google Search’ button. This will automatically unlock the Easter egg instead of generating the main Zerg rush page and results.

Once activated, a bunch of Os will drop down from the Search bar. Almost immediately, it becomes a race against time to double-click on each of them before they spread — consuming everything in their path and breeding new Os. Once the player starts to become overwhelmed, they’ll notice the Google Search zerglings grouping together. When the game ends, they’ll have formed a ‘GG’ shape — a  nod to the ‘good game’ reference made popular by StarCraft players and gamers in general.

Zerg rush is far from the only Google Search Easter egg. In fact, it’s not even the only Easter egg with a gameplay component. Another popular Easter egg is Atari Breakout. If someone types ‘Atari Breakout’ into Google Search and clicks ‘I’m Feeling Lucky,’ they start playing a Atari’s famous Breakout game. There are also Easter eggs for Pac-Man, Super Mario Bros., and more.

Next: Batman Easter Egg On Google Lets You Light The Bat-Signal

John Finn is a technology editor and writer for Screen Rant. John has been covering technology since 2014 and focuses on where tech meets the movie and TV industry. A Psychology graduate from England who now lives in the US, John previously worked in the aviation industry as an airline reviewer. You can find John on Twitter (@J_Finns) or contact directly at john [at] screenrant [dot] com.