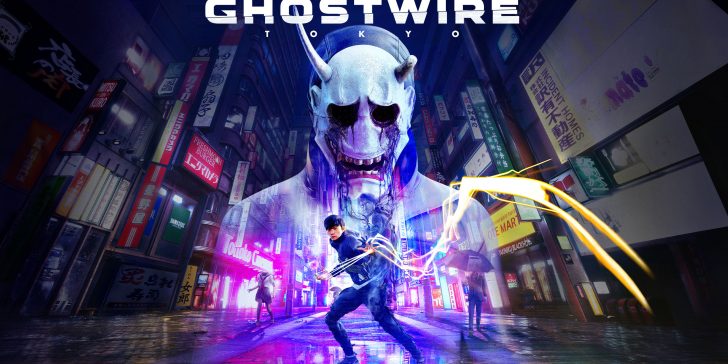 Ghostwire: Tokyo is brimming with tension. Within the first few moments, four slenderman-looking Rain Walkers reveal themselves and watch you squirm like a horror movie extra as you attempt to figure out the controls to your newfound superpowers. I deeply respect throwing that frantic gameplay onto the player off the top; confronting these supernatural Visitors on launch establishes the desperate tone and deathly stakes immediately.

A frightening sense of urgency demands your attention during the first 30 minutes, but suddenly that suspense vanishes after you fight a few waves of enemy types, unlock more explosive powers, and realize what kind of game you’re playing. The pivot from fascinating, light survival horror into full-on open-world power fantasy, with detective-vision and a busy HUD, is jarring. And it makes me ache for a version of Ghostwire: Tokyo where developer Tango Gameworks drops the broad open world with extra toppings, and puts all their heart into crafting satiating horror.

In Ghostwire: Tokyo, you wake up in the streets of Shibuya as Akito, a man who has died and is now being partially possessed by a spirit named KK. A mysterious fog, infested with paranormal creatures from Japanese folklore, is spreading across Tokyo, wiping out almost every human it passes through. Yet somehow you survive. There’s a masked big bad who’s at the root of this deadly mist, and it’s up to you and KK’s supernatural powers to clear the city of fog, find your missing sister, and ultimately, bust those ghosts.

Shortly into Chapter Two, you’re stripped of KK’s power, compelling you to use the attentive stealth route with a bow and a measly amount of arrows. This section excels at making you uneasy, and encourages you to be strategic with each action you take. Should you carefully take out this ghost mob with silent back purges for instant kills or should you hop a fence and scale a short apartment in an effort to avoid them? Whichever option you choose, your lack of power forces you to analyze your surroundings in contrasting ways.

Ghostwire: Tokyo fires on all spectral cylinders when it slows down, suppresses your superpowers, and makes you think tactically about every action you make. Although instead of continuing that path of suspenseful sleuthing, after about 15 minutes you reunite with KK and get back to regular scheduled programming of you evaporating foes with a barrage of your elemental judgment.

In the first couple of chapters your powers include fine gusts of wind that can be thrown in succession, fireball bombs which descimate foes with a large eruption, and water beams that are deadly at close range. They all have different uses, but I found myself sticking to the fireballs because they’re so ridiculously strong that they can wipe out rooms with one charged attack. These attacks all shine through slick particle effects and hand animations, and the subtle vibrations from the PS5’s Dualsense upon release and contact with the enemy are a nice tactile touch.

You can also kill Visitors by firing off your shots to get them in a weakened state and exposing their core, which you then pull out of their chests to expunge them for good. With either approach, destroying enemies turns them into a neon, pixelated dust that scatters off the screen smoothly; that flurry of light always creates a dazzling spectacle.

Ghostwire: Tokyo‘s core loop is satisfying. Most confrontations take place in head-on battles where stealth isn’t really an option. Since the combat is clean, I can’t complain much, but it still doesn’t hit as hard when you know the sneaking segments are much more fruitful in creating a tense, captivating atmosphere.

When you want to shake things up from the main questline, there are lost souls that require your spirit detective prowess to pass on to the next life. These sidequests are largely dull, don’t build out the world’s lore, and are poorly written at times. For one quest, I was on a mission to free an elderly woman’s Zashiki-warashi (a lucky ghost) from her evil landlord. I had to search through the house and find the landlord’s awkward and unbelievable notes, which were left out in the open and detailed his corrupt plan from start to finish in very clear text. At one point he says “I bought a lockbox and hid the key behind a Buddhist altar in my bedroom. No one will ever be able to find it there, and I’m not telling a soul!” This shatters the very little suspension of disbelief that this quest attempts to prop up. The writing for these sidequests feels shoved in as an afterthought, and really doesn’t add anything narratively or give you enough skill points to make them ever worth the effort. It would’ve been nice to have these lost spirits help flesh out the backstory to this chaotic state, or have them cut to focus on building tension for the main story.

While it doesn’t have the horror hook I’m craving, Ghostwire: Tokyo is a graphical marvel that is the closest I’ve seen a PlayStation game come to rendering reality through 3D visuals (a fact that is both frightening and beautiful). At points, the character models can be too uncanny, but the environments always pop when walking through a sidestreet with flashing neon storefronts still signaling for business. Or in multidimensional hallways where Ghostwire meshes reality with anxious fear and plays ghastly tricks on you like slamming whirlpools of chairs against a wall before they instantly disappear.

The most visually gripping scene happens near the end of Chapter One where Akito dies once again, and you’re transported to an endless lake of pitch-black water with bundles of bright crimson spider lilies swaying around your floating corpse; a tragically delightful tableau that you and KK hold for a few moments before coming back to life. Ghostwire: Tokyo‘s graphically ambitious world is magnetic, and it finally builds a much-needed case for the PlayStation 5’s tech jargon-filled existence, even if it is more than a year into its lifecycle.

It’s astonishing how glossy and high-reaching Ghostwire: Tokyo is, and how easily its horror-inspired vision eagerly stands out from its PlayStation contemporaries. Though ultimately, I wish it would scale back on its open world and redirect that energy into honing an atmosphere of persistent, otherworldly dread.