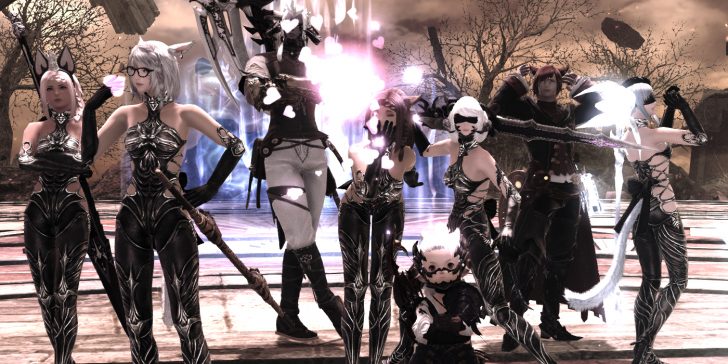 Eight years ago, I braved my first-ever MMO raid encounter with Final Fantasy XIV’s Binding Coil of Bahamut. Anxious, miserably shy, and relentlessly focused on people-pleasing, it only took a few passive-aggressive remarks and impatient barks from my group before little Dragoon me crumbled into a mess of tears and panic. The confidence I’d built from weeks of backflipping off of Titan’s arena and masterfully running face-first into Ifrit’s hellish flame spit was gone in a few miserable hours. It took me ages to work up the nerve to face Twintania again while I abandoned Dragoon altogether.

The me from today looks back on the from me back then and wants to shake her, but I get it. I was new, trying to learn a bunch of unfamiliar skills at once, dealing with strangers, and frustrated parts of my favorite game felt off-limits due to my anxiety. I spent ages combing online conversations about fights, taking words from biggest shit talkers as gospel, and assuming I was the only non-expert FFXIV player trying to beat up Nael van Darnus. There’s a world of difference in how I approached playing then and now, but if I could go back and share a little wisdom with my old self, I’d beg her to ignore the loudest folks, let go of the shame, and embrace life as someone who stands in the shared tank buster but has no business sharing said buster.

Anyway, that’s a lot to say: I’m a bit of an anxious disaster, it’s a blast, and there’s a lot I wish I would have known on the days I let my embarrassment hold me back from trying. Like, surprisingly, I’m not the first person to die staring doe-eyed at a boss casting Oh-Shit-You-Better-Move, and the folks scared to compete for my impressive title of World Last need to hear it.

It’s easy to get a bit swept up in conversations about optimal strategies, what the best among us are doing, and party meta chatter — plenty of it is in good fun, too! I’ve indulged in those debates with no real ability to execute in the same ways, but my anxiety once let those conversations rule my perception of what’s reasonable to expect from myself and my peers. For those of us with a perpetually clenched jaw and crushing fear of upsetting someone, the idea of jumping into a party of strangers and admitting you’re about to let them down for hours is kind of horrifying.

Now, years after my A Realm Reborn failures,  I’m finally jumping into FFXIV’s Party Finder fully prepared to disappoint. The game has a pretty good reputation when it comes to the community, but the leap from normal dungeon runs to harder content guarantees you’ll run into someone eager to ruin your day. I’ve let those folks get to me on more than one occasion— sometimes resulting in a flood of anxious apologies, blaming lag, or a panicked scramble to mash my PC power button while considering a name change. My FFXIV existence in Endwalker is occasionally fueled by sheer spite, but it’s mostly a rough process of stepping out of my comfort zone to embrace my gaps in knowledge and understanding I’m not alone.

Resisting the urge to melt into the floor and hide, I now join groups marked as learning parties for difficult encounters with a PSA on the things I don’t get. Nine times out of ten, most players are receptive and there for the same reasons. For every person that’s written a novel on why I need to uninstall, I’ve encountered dozens of others eager to share my woes on not getting it. Sometimes, I meet people willing to reframe complex mechanics in a way that finally clicks with me, and I appreciate it every time. A lot of that knowledge gets passed along, so I wind up paying the effort forward.

Occasionally, I’ll see an essay take off on some corner of the internet popularizing ideas on not deserving messy clears or how we’ve all got to play like the best among us. It took a while for me to get most of those players at the top don’t intend for their accomplishments to turn into a bludgeon. Listening to perspectives from folks that could clear Ultimate encounters half-asleep finally helped it click with me that, despite a stranger’s puffed-up rambling, even the folks I admire go skipping off the edge of an arena.

With more people playing FFXIV, I realize there’s an uptick in hot takes on one-size-fits-all approaches to fights and shame folks just scraping by. It happens every time a new fight comes out. But the reality is those loudest folks are probably stuck in your Party Finder group for a reason, and if they’re that much better off, surely they can leave for greener pastures. There will be people who join your learning party expecting flawless runs or mocking the little things, and it’s an unreasonable expectation to carry in one of the world’s biggest games.

Some of y’all working up the courage to try need to hear you’re doing just fine navigating a sea of jargon for the first time, going in half prepared, and spending most of the fight eating dirt. It’s okay, and even after years of messy Extreme Trials, Savage Raids, and Ultimate encounters, I’m probably on the ground with you.