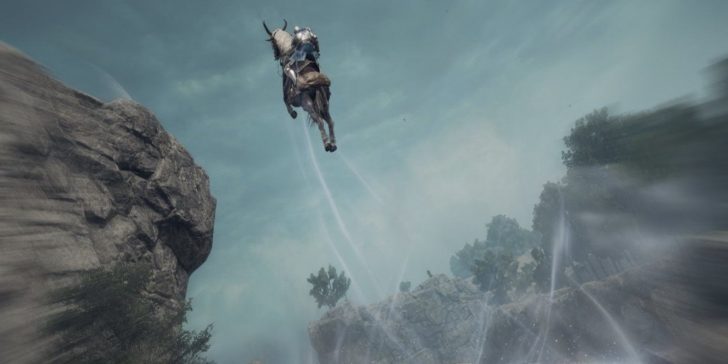 I had a come to Erdtree moment with Elden Ring this weekend. While I previously embraced the game as a spectacle, and then decided to download it and give it a shot despite a near-total lack of skill, I (unsurprisingly) got stuck. Thanks to my poor understanding of the structure of the game, I found myself in an early catacomb, banging my head against what I thought was a critical early boss fight. I was making some progress, you see, but not enough. After a few dozen fights against a deranged cat statue… thing, I took to Twitter to vent my frustrations at my own lack of skill (particularly in my inability to consistently read and execute parries).

Many folks were helpful! But it took a friend texting me, asking me specifically what my hang up was before they imparted a  revelation: I didn’t need to fight this boss. It’s just a minor side boss in a random early-game catacomb. All I actually needed to do was find a third site of grace and I’d be visited by the nice lady who lets you level up. Unburdened, I stumbled around the world, found a third site of grace, got my level-up ability and horsie, and went on my merry way.

Now, I’m about eight hours in and absolutely in love with the game. My secret? I look at it the same way I looked at Breath of the Wild — this is a platformer! A massive, immersive-sim adjacent (we’ll get to that shortly) platformer that’s all about freedom, running, jumping, rolling, and exploring increasingly wild territory. You don’t need to fight (often, at least) to go places!

If Elden Ring isn’t explicitly a platformer, it is at least open enough to let you make your own fun, which, for my money, is the key ingredient in immersive sims. This is a FromSoft game, yet, right now, I’m not fighting ANYONE. Skill? My skill lies in how artfully I can dodge and run away from every hostile, how well I can manage stamina and Torrent’s double jump, leaping around the world like some kind of medieval equine jet pack.

I’m leveling up, thanks to all the nice runes I find (often at gravesites), and I’m picking up craftable materials like it’s my job. I can sell everything for runes, so, if it’s possible to beat this game by basically picking flowers and getting friends to do most of the combat for me, you can bet your sweet crimson tears that’s what I’ll be doing. Maybe this sounds like I’m playing it “wrong.” After all, the core appeal of Souls games (as I understand it, having played through Bloodborne and ⅔ of Dark Souls 3, and watching dozens of hours of speedruns and challenge runs), is skill acquisition. It’s the satisfaction of testing oneself in challenging fights, getting better moment by moment. I’ve heard it compared to climbing a massive, seemingly sheer cliff face.

I get that, I really do, but I have that in other areas of my life and don’t have the patience to become a precise (or even a passable, workmanlike) soulslike player.

But you know what I am good at? Running like hell and jumping over everything! I adore 3D platformers, and here is a wide open world full of potential platforms and structures and monsters that just serve as fun obstacles to avoid as I charge around, finding map stones and sites of grace, nabbing items and grabbing up crafting materials to sell for runes.

That’s just the progression aspect. What’s most fun for me is discovering this positively wild and gorgeous and deeply, deeply weird world. I’m amazed at the sheer variety of territory, and at how well-arranged it is to afford new possibilities (there are always a few weenies on the horizon, teasing new areas and adventures). It’s simply so much fun to explore and wander and ponder how to get around without pissing off any local fauna — and I don’t even have any stealth spells yet (my colleague Steven says they exist, so I look forward to my inevitable transition into playing this game as a stealth platformer!)

It’s not that I’m never going to fight anything ever — why, just yesterday I saw my first real “enemy felled” screen, by fighting an old man on a boat (the Mariner of Tibia, a tiny, easy mini boss that was within the grasp of my meager skills). He went down due to my brilliant strategy — I’d run at him on horseback, whack at him a few times, and run away as he did some kind of water attack.

That’s really all the fighting I want to do, to be honest. If there’s some way for me to actually complete the game by only fighting a few enemies, then the story critical bosses (probably with LOTS of help from friends and summonable buddies), and otherwise treating this as Super Mario Souls? And then, as I discover more and more elements that allow me to fell enemies without directly engaging them (like a powerful poison condition Steven told me about today), treating the game as a Prey Souls or Dishonored Souls? Then that’s basically perfect for me.

I’m really appreciative that FromSoft has made a game this open and pliable. I’m actually able to make my own fun here, instead of trying to fashion myself the type of player that I’m just not, as I had with previous titles. Bloodborne was good enough and weird enough that I got through it despite that factor, but Elden Ring offers me so, so much more, without the same caveats.