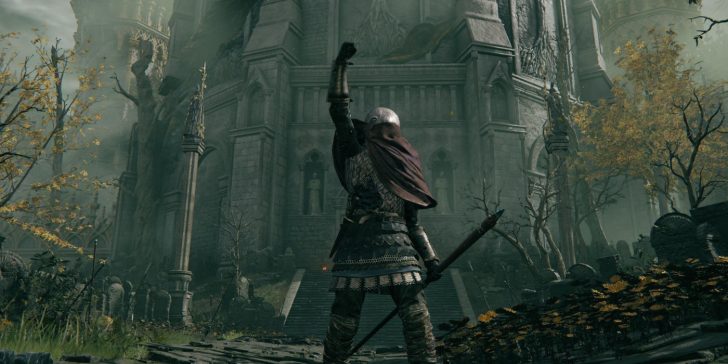 I was only a few hours into Elden Ring when I stumbled upon a giant for the first time. After the tutorial area, I completely ignored the Grace’s guidance and ventured south instead. There, I dropped down onto a large and desolated coast, where I spent a good chunk of my time picking up flowers, practicing my dormant Soulsborne skills against a few enemies and sitting on the shore for a brief respite. But I quickly realized there was only one path back up — one filled with danger.

About halfway through, after a few dozen jumps and a careless sprint, I stopped in place and gasped. A camera turn revealed the presence of a massive being that was half naked, half dead, and fully bent on annihilating my low-level character with a sword three times larger in size. I crouched and hid in bushes nearby, watching the giant’s slow but steady patrol while its footsteps stomped my brain through my headphones. I patiently followed the route, making short movements whenever possible, until I was far enough to make a run for it. It made for one of the most spine-chilling and exhilarating moments I’ve experienced in a game in recent times. My journey through Elden Ring has been a series of small victories like this.

I’ve played every Dark Souls game to some capacity, including Bloodborne and Sekiro: Shadows Die Twice, but I never got too far into any of them. My time with Sekiro was part of a work assignment, so I had to force myself to see it through. As for the others, I recall spending a couple dozen hours in each — sadly, none managed to grab my attention for long. Their tough and often cruel nature was compelling enough for me to try and endure despite the hardships and hundreds of deaths. But my mind was set on just making it to the next boss, unable to just enjoy the exploration or lose myself in those worlds.

In FromSoftware games, there is always an alternate route to discover, and you can get away with cheesing boss fights with specific builds or the help of an online player. Yet, aside from Sekiro, it was hard to feel satisfied when using these shortcuts, as if I hadn’t earned those victories. I expected to hit similar walls in Elden Ring but have been greeted with open doors instead, leading to a place where my ideas are rewarded and supported by clever mechanics.

The loss of linearity in Elden Ring is widely praised for good reason. The foundation of the Soulslike formula remains ever present, and there are tons of places that feel more like past experiences, having you explore underground dungeons and multi-layered fortresses. The biggest difference is that hitting a wall due to a confusing puzzle or a tough enemy guarding an entrance isn’t the end of the world. Unlike Demon’s Souls, where I only had a handful of almost equally punishing areas to explore, I can now fast travel out of a tough situation and go somewhere else, only to return stronger later on. The frustration is gone.

One mechanic in particular sounds incredibly simple on paper but serves as a pillar for the kind of engagement Elden Ring offers. As you traverse the open world, there is no shortage of enemy groups waiting to ambush you, camping in settlements, or just patrolling roads. If you take down a whole group, your flasks are recharged (not all of them, mind you). This allows you to heal yourself and hop on your horse to continue making haste, as opposed to having to return to the nearest Site of Grace to patch yourself up and respawning all enemies in the process. I’ve gone from point A to B defeating several enemy groups because of this. I feel immensely accomplished whenever I manage to defeat several enemies before healing myself immediately afterwards, while difficult encounters have tougher odds where I really depend on a victory to survive.

It’s much easier to sustain momentum this way, and Elden Ring encourages me to just get out there and give risky situations a try, even if the odds are stacked against me. For example, there was an enemy settlement with a large group of soldiers guarding it. Though it was easy to take them down one by one, a heavy enemy proved troublesome. After several tries, I discovered that if I quickly rode on horseback through the settlement in order to draw the attention of the archers on to myself, the goblins who lurked around the entrance would actually venture into the yard and start a fight. Since the tough enemy was the closest to the road, it became their main target — all I had to do was deal the final blow with ranged spells.

The soldiers were guarding the door to a fortress, which greeted my presence with bombs and a pack of rats as soon as I arrived inside. I was fairly beaten up by the time I had pushed through, but again, defeating the group allowed me to heal myself and continue just a bit further to find a knight who killed me almost instantly. Past traditions are still part of the core of the experience, yet progress finally feels tangible. Defeating the next boss has stopped being the only goal in mind.

After spending 20 hours with Elden Ring, I haven’t yet felt the frustration I’ve encountered with past FromSoftware games. The experience is as punishing and nerve-wracking as ever, but I finally feel like I have the tools to stick around and see it through. I’ve gathered dozens of small victories to cherish and remember, each one teaching me something new, and I can’t wait to keep exploring this world. I’ve hid in the bushes long enough — now I’m ready to make a run for it.