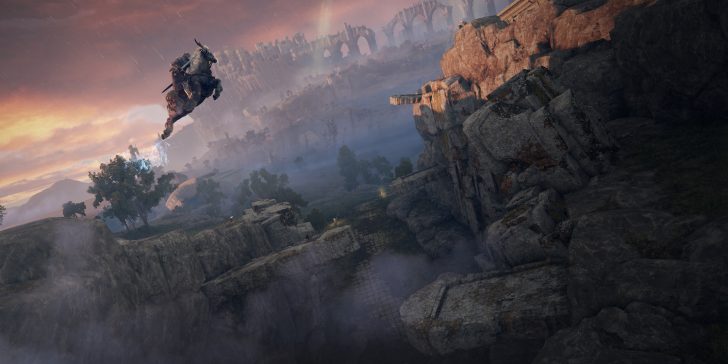 Last week, my brother watched as I skulked through the starlit streets of Nokron, Eternal City. “Is there more of a story yet?” he asked.

It’s a difficult question to answer. Technically speaking, I’ve recovered two Great Runes and am therefore considerably closer to becoming the Elden Lord (I think?). Other than that… not really.

“It’s kind of complicated,” I told him. “But let me tell you about the dragon I fought yesterday!”

For decades, FromSoftware games have famously boasted fragmented narratives that teem with intrigue and jargon. In general, fragmentation benefits these stories. The only sources of hope in these ostensibly grimdark worlds usually lie in the spaces in between, meaning the ability to wonder is often the surest way of mustering the will to persevere. As a result, it should come as no surprise that studio boss Hidetaka Miyazaki often uses his childhood experience of reading books he couldn’t understand and filling in the gaps with his imagination as inspiration for his games.

Despite popular arguments to the contrary, Elden Ring is different. Its open world defies the very concept of containing a story, a drastic change from the formulaic storytelling design the series is known for.

The Souls series has always relied on the willingness of players to become enormously invested to succeed, although the risks and rewards of doing so have traditionally been — you might say paradoxically — very precisely outlined. You clear a dungeon, you trigger a boss fight, and you earn a sliver of arcane narrative progression (it’s probably more accurate to say “narrative confusion”). After a cutscene that likely breaks your brain with its absurdity, you roll out the newly open door in front of you and the process repeats itself as you follow a deceptively linear trajectory towards the end of the story. There are obvious exceptions to this — Bloodborne’s Abandoned Old Workshop springs to mind — but the formula rarely, if ever, sees radical change.

Enter Elden Ring. It’s easy to make a relatively face-value argument that the nature of an open-world structure inherently permits it to indulge in non-linearity. Because you can go anywhere and do anything (within the logic of the game, obviously), you can sort of write your own stories using the game world as your setting. The Legend of Zelda: Breath of the Wild is still one of the most impressive examples of this kind of design, while games like Oblivion have actually been used to prototype characters for famous fiction — Terry Pratchett’s beloved Snuff is a clear testament to this.

In the case of The Lands Between, however, FromSoftware has managed to muster something much bigger. Elden Ring proves not only that the illustrious studio is capable of developing a best-in-class open-world game — it also proves that open-world games are potentially the best vessel for its now-iconic modus operandi.

The strongest argument for this is extremely simple: an open-world game in which the narrative is laboriously jargonic by design is begging to facilitate a story much more so than it is to tell one. Yes, you can talk about Godrick the Grafted or Malenia the Severed. I fully believe your interpretation of the lore hidden deep within Raya Lucaria Academy is fascinating. But, as I stated earlier in this piece: let me tell you about the dragon I fought yesterday.

Dusk had hardly fallen when the pattering of hooves on stone gave way for a slow series of light and crunchy splashes. The water, shallow and murky, was swallowed by horizons on every side. In an instant, what was once an ordinary lake transformed into the greatest coliseum in recorded history. In its center lay a serpentine behemoth, its black scales glistening beneath a waning moon. A sauntering trot became a momentary canter before hastily elevating into a full-fledged gallop. Staff in hand, I threw the first stone — in this case, a Glinstone Pebble — in what would soon become a victory befitting of the future Elden Lord. The dragon rose and let out an almighty roar—

I could go on. The point here is that while the above could be said of a huge number of games, where any in-game event can be described in literary prose, the circumstances of my story are densely packed with context that is unique to my experience. Because Elden Ring is open-world and non-linear in the truest possible sense, people will inevitably fight Flying Dragon Agheel at completely different points in their overarching journey. Souls veterans might take it on as soon as possible — which is actually pretty soon considering how close Lake Agheel is to The First Step (side note: speedrunners are already completing the game in under an hour. What the hell?). But the vast majority of players aren’t particularly interested in taking on a massive fucking dragon when they’ve just been battered by a bunch of little lads with wooden shields.

While this is only one example, I think the fact it comprises two lengthy paragraphs after being condensed into its most compressed form speaks volumes. When you consider the immense scale of The Lands Between, and take into account that the entire world is connected in a way that is typical of FromSoftware’s meticulously designed overlapping levels, the value of this premise increases exponentially. That goes without mentioning the minor, independent subtleties on display: I’m a mage; I often fight on horseback; I instigate fights from a distance wherever possible. Other people play Elden Ring as a platformer or write odes to its Exile armor. That’s the beauty of this whole phenomenon: you can do whatever you want and the stories you participate in will improve in direct proportion to how original your approach is.

Character build variety obviously influences this as well. While this is technically a factor in all FromSoft games, Elden Ring’s openness makes playing the game as an Astrologer and replaying it as a Samurai not just different experiences, but fundamentally separate ones. This makes weaving your own stories into The Lands Between so much more enticing than it was in previous Souls games. In the same way that Pratchett used Oblivion as a tool for his own character design, Elden Ring is a wonderfully malleable game that could be used to stage bona fide epics with zero respect to its own ostensible narrative. You cannot in good faith say the same about the vast, vast majority of other games.

All of this makes particular sense when you consider that one of Miyazaki’s greatest idols is the inimitable Fumito Ueda, whose shadow looms so colossal over The Lands Between that it stretches from Limgrave to Liurnia, to Leyndell and beyond. While Ico and The Last Guardian tell more focused stories, Dark Souls — and by extension Elden Ring — could never have existed without Wander and Agro. Without meaning to broach the problematic topic of modern auteurism, this feels like the game FromSoftware was always destined to make under Miyazaki. The Forbidden Land is quieter than The Lands Between, but the focus on discovering your own story (as in, the story that is not written down and is unique to you) is strikingly similar in both. Ueda would be proud.

When someone asks what Elden Ring is about, it’s difficult to think of a decent answer. Something something, Tarnished, something — oh, The Shattering! There was a ring, but now it’s gone. The gods are… upset? All animals are now dogs. The end. (This is a joke, please do not accuse me of being disingenuous.)

In the absence of being able to recount Elden Ring’s story, dozens of your own stories within it will spring to mind like double-jumping Torrents. In Elden Ring, the best stories truly are and always will be the ones you write yourself.