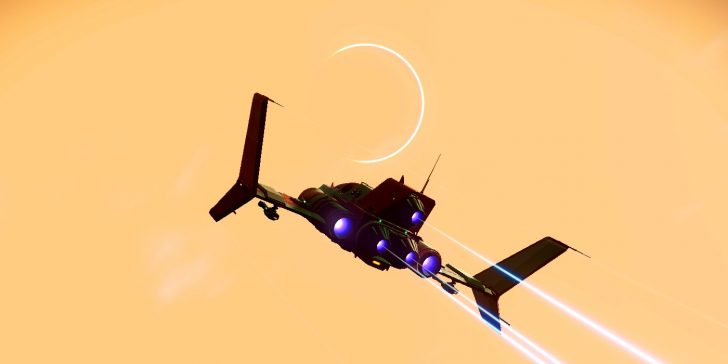 It’s been a long journey for the folks at Hello Games after the initial release of No Man’s Sky back in 2016. Since then, the game has gone through a series of big content updates that shaped the adventure bit by bit. Whether you have an old copy of the game laying around or just never bothered to boot it up from Steam, you might be wondering: Is it too late to get into No Man’s Sky?

Before we get started examining the pros and cons, keep in mind that No Man’s Sky is currently on Game Pass (for both consoles and PC) so you don’t need to purchase the game in case you want to give it a quick try and see how you feel with it. As with other games, it’s hard to know how long it’s going to be in the service for, but at the moment, there aren’t any news indicating the opposite.

In addition, remember that none of the content updates thus far have been paid, so everything is integrated from the get-go. As such, the game already includes Foundation, Pathfinder, Atlas Rises, Next, The Abyss, Visions, the 2.0 Beyond update, Synthesis, Living Ship, Exo Mech, Desolation and the 3.0 update, Origins, Next Generation, Companions, Expeditions, Prisms, Frontiers, Sentinel and Outlaws. Oh, and the game also supports VR in case you want to give that a try.

Is It Too Late to Get Into No Man’s Sky?

Not at all! In fact, I’d argue that this is the best time to either jump back into No Man’s Sky or venture to the stars for the first time. In my experience, I skipped the game on launch after hearing about the missing content, but I remained intrigued about its initial potential. Nowadays, it’s safe to say that the current state is a day and night difference compared to the original release. The experience has become bigger and more complex, with updates tackling everything from bugs and small tweaks to the addition of new mechanics which are now part of the core experience.

One of the questions that came to mind before jumping into the game is how difficult is it to actually interact with the new content. Well, it depends greatly on what you’re looking for with the game. There is a main quest that serves as a great (and much needed) guide, explaining the basics of your suit, how to survive out there in the wild, and the foundations of crafting. From there, you can stick to it or go out to explore on your own. The upside is that certain actions unlock side objectives as well, so you can pursue quests often in case you get overwhelmed by the sandbox nature.

All in all, it may take you a while to encounter every single new addition in No Man’s Sky, but honestly, everything is intertwined with each other, which means that you’re bound to uncover new features often. Now that we’ve tackled the “is it too late to get into No Man’s Sky question, if you’re looking for a couple additional pointers, you can find a couple tips to keep in mind before you set off to discover the next planet.

There is Actual Multiplayer Now

In case you haven’t been up to date, yes, there is now proper multiplayer in No Man’s Sky, and it even allows for cross-play between platforms. While the game only used to had an asynchronous component where you could see other people’s names when they discovered a planet for the first time, you can now play with people as intended. And I highly recommend it, too! Alongside the ability to play with friends, you can also encounter other players while you’re traveling solo.

No Man’s Sky has four different modes by default, and each allows you to tailor your experience accordingly to what you want out from the game. You can stick to the default and explore the universe as it was originally intended, go through a survival mode with more hazards, higher fabrication costs, and a smaller inventory, enable permadeath so your save is wiped upon death, or opt for creative, which gets rid of damage and fabrication costs entirely.

Depending on when you’re jumping into the game, there is a chance of encountering a Community Expedition, which runs for a limited time and grants unique rewards. Make sure to double check this often!

Yes, the First Planet is a Hassle, But It Doesn’t Take Long to Depart

Guide writer Collin MacGregor already explained this in detail, but it’s worth reiterating that the first planet is always going to have a certain hazard involved, from poisonous fungi to fire storms. It’s a punishing introduction of sorts, which can be frustrating, but you won’t have to wait too long to get out from there and onto a different planet. Think of it as a tutorial that teaches you the basics to survive out in the wild, from resource gathering to how to replenish your suit’s defenses when things get dicey.

If you’re interested in the construction aspect of No Man’s Sky, great news, as the component appears fairly early as you follow the main story. It only took me a couple hours to unlock the required device to purchase blueprints and create a base on a planet. This becomes a central part of the experience as you slowly expand it. From there, as long as you have the needed resources, you can go ahead and customize it in many ways. I only did a basic house for my character, but I was able to name it Fanbyte and make that planet my home, which is a good way of leaving your mark as you go out to explore.

Stations Are Filled With Life

You might remember stations being quite empty when the game first released, clashing with the illusion of stumbling upon other passengers, even if they were NPCs. This has been greatly improved since — during my first visit to a station, it seemed like I was the only one there. But it only took a few seconds to see another ship on the landing dock. And then another. And another. All the while there were several characters walking around or chilling in the inner rooms, often being up for a quick chat, trading, or even recruiting (although you need a few specific items for the latter).

While this isn’t Mass Effect, it adds so much to see several characters in one place, as well as having access to stations and merchants from where you can take on quests, purchase rare materials, customize your character, and so much more.

Is it Too Late to Get Into No Man’s Sky? No, Just Be Patient and Embrace the Sense of Discovery

You won’t immediately get to have a huge fleet with recruits, an enormous base with gardens that provide almost infinite supplies, or the highest reputation with certain races in No Man’s Sky from the get-go. As I mentioned, all of it takes time. The key difference, compared to when the game first launched, is that all of these mechanics are actually in reach now. You can stick to the main quest as much as you want to encounter them sooner, or just go out and explore planets to find all sorts of smaller to big discoveries. After a few hours, I continued to be surprised by everything that the game threw at me without making me feel overwhelmed — the items that were unattainable at the moment serve as pointers for future goals as I explore outer space.

I recommend to use the scanner often to find points of interest, and allow yourself to take a detour when you see an object in the distance that peeks your interest. You never know what you’re going to find, and that’s what creates a sense of discovery that feels different from anything else out there. Just be patient, enjoy the scenery, and tag along with a couple friends if you have the chance. Next time somebody asks “is it too late to get into No Man’s Sky?” you already know the answer for it.