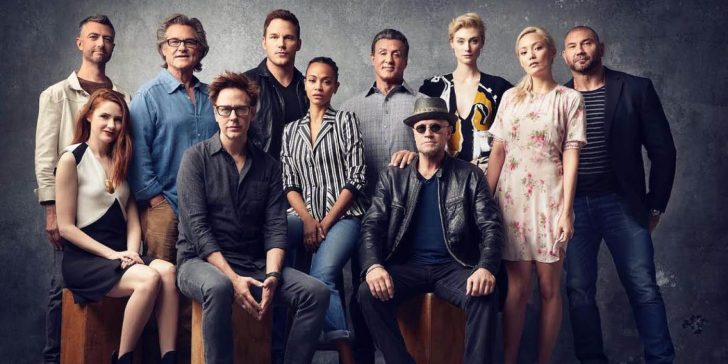 Five years after the release of Guardians of the Galaxy Vol. 2, director James Gunn celebrates the anniversary with a photo of himself with the cast.

Guardians of the Galaxy Vol. 2 director James Gunn has celebrated the anniversary of the MCU sequel’s release by sharing a photo of himself with the cast. First released in May 2017, Marvel’s Guardians of the Galaxy Vol. 2 grossed over $863 million at the worldwide box office, surpassing the total gross of the first film by nearly $90 million. At the time of its release, it also went on to become the fifth-highest grossing film in the Marvel Cinematic Universe while earning positive reviews from fans and critics. A third Guardians film is set for release next year.

Following on from the events of 2014’s original film, Guardians of the Galaxy Vol. 2 saw the return of the core cast, including Chris Pratt, Zoe Saldaña, Dave Bautista, Vin Diesel, Bradley Cooper, Michael Rooker, Sean Gunn, and Karen Gillan. It also saw the introduction of several new characters into the franchise, such as Pom Klementieff’s Mantis and Sylvester Stallone’s Stakar Ogord. Gunn had also cast screen veteran Kurt Russell as Ego, Peter Quill’s father and the chief antagonist of Guardians of the Galaxy Vol. 2. The movie took the franchise even deeper into the MCU’s cosmic side, telling a story that involved Star-Lord’s unique origins and an alien race known as the Sovereign.

Related: Guardians of the Galaxy 2’s Missing Superhero Has The Perfect Answer

In honor of the five year anniversary of the sequel’s release, and marking one year from the future release of Guardians of the Galaxy Vol. 3, Gunn took to social media to share a photo with the Vol. 2 cast. Calling the past 10 years he spent working on the franchise “a strange & beautiful odyssey,” Gunn expressed his affection for his “Guardians family.” Check out his original post below:

With just 12 months left before the third and final film in the Guardians of the Galaxy series gets released, Gunn’s clear sense of nostalgia is certainly understandable. Gunn officially signed on to direct and work on the script to the original Guardians film in September 2012, and over the past decade much of his professional life has been preoccupied with shaping and heading up the hit franchise. From the beginning, Gunn had an idea of where he wanted the Guardians of the Galaxy trilogy to go, and 2017’s Vol. 2 served as the midpoint. With Guardians of the Galaxy Vol. 3 said to be a very emotional finale, fans might do well to return to the second movie to remind themselves of where Gunn’s primary arc last left off.

In addition to Guardians of the Galaxy Vol. 3, Gunn has also been working on the Guardians of the Galaxy Holiday Special, planned for exclusive streaming release on Disney+ in December of this year. With nearly 10 years worth of hard work and effort bringing 3 films and a TV special to life, it is little wonder that Gunn considers his Guardians cast as a family and would therefore choose to celebrate a milestone anniversary for one of the movies they all worked on together. Gunn’s Guardians journey is coming to an end, while fans have another year to go before they can find out what happens to all the characters years after the events of Guardians of the Galaxy Vol. 2. In other words, this is a celebration that is still ongoing.

Next: Guardians Of The Galaxy 4 May Have An Even Bigger Problem Than Avengers 5