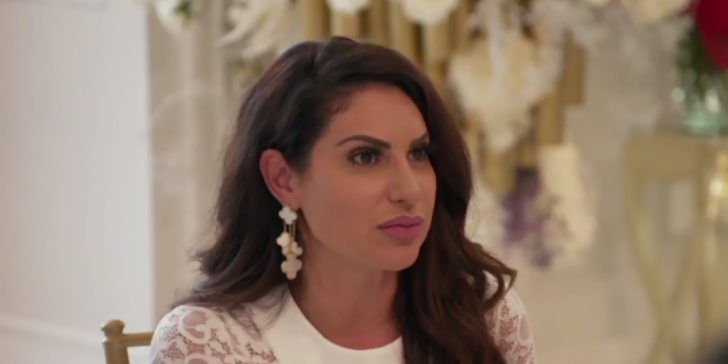 Jennifer Aydin claims Frank Catania is the one who started the Evan Goldschneider cheating rumors on The Real Housewives of New Jersey.

Jennifer Aydin claims Frank Catania is the one who started the Evan Goldschneider cheating rumors on The Real Housewives of New Jersey. With Jen being confronted about Bill Aydin’s old affair, she has become the new target on the show. After getting called out for her past pot-stirring into other people’s marriages, Jen is attempting to defend herself from being labeled a bone collector. Now that the season 11 cheating rumors about Jackie Goldschneider’s husband have resurfaced, Jen is accusing Frank of being the first one to spread the gossip.

Season 12 kicked off with Margaret and Jen going at it at Teresa Giudice’s summer kickoff party. Margaret grew tired of Jen portraying herself as better than the others and constantly judging Margaret and Margaret Sr. for their cheating pasts. Margaret got some payback on Jen by finally revealing the affair she knows Bill had years ago. Jen instantly became defensive while admitting to her husband’s past cheating. Now that the cat is out of the bag, the housewives are voicing their opinions on Margaret and Jen’s quarrel with most (except Teresa) agreeing that Jen had it coming.

The heated debate led to Evan’s season 11 cheating rumors being brought up with Jen being ousted as trying to contact people to get dirt on Jackie’s husband. But Jen quickly claimed that she only heard about Evan cheating at the gym through Frank, Dolores Catania’s ex-husband. After the episode aired, Jen doubled down on her claims in a post on her Instagram Story. I’m Watching Bravo reposted a screenshot of Jen’s post on Twitter claiming that “Frank 100% brought up the rumor again, the fact that he and Dolores think they can spin this is hysterical.”

On Instagram, Jen posted a photo of the episode on her television and captioned the post as clarification on her claims on the show. Doubling down on her claims that she believes Evan “never cheated” on Jackie, Jen claimed it was proof that she “knew of any woman or said anything of such to anyone.” Speaking to her followers, Jen asked them to think about “how would I think to ask Frank these things if it didn’t come from him first?” Jen also noted that Frank admits to knowing of the Evan cheating rumors in the after-show. With Jen calling out Frank, it could spell trouble brewing between her and Dolores.

Dolores sided with Margaret once being told about Jen reaching out to Frank to dig up dirt on Evan. While Dolores and Frank have been divorced for years, the two are still extremely close and protective of each other. With Jen putting Frank on blast, Dolores will likely come to this defense and become more at odds with Jen. The drama on The Real Housewives of New Jersey is heating up and pointing to a major showdown in the near future. Jen might end the season with more enemies than she started with.