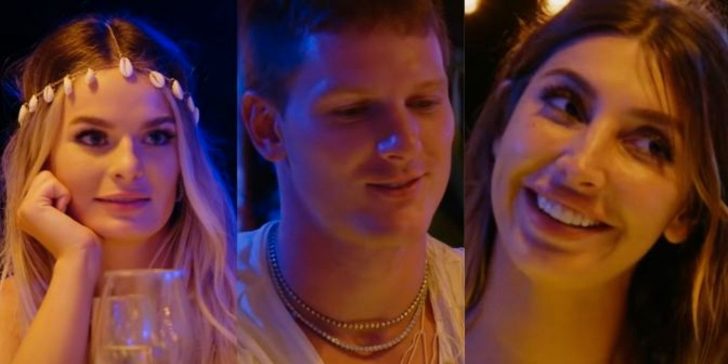 Siesta Key star Juliette Porter revealed in an Instagram comment that her ex-boyfriend Sam Logan and her costar Jordana Barnes are living together.

Siesta Key star Juliette Porter has dropped some huge news, revealing that her ex-boyfriend Sam Logan is now living with costar Jordana Barnes. Jordana and Sam had been friends long before Sam started dating Juliette, so when she first joined the cast of the MTV reality show, Juliette had some suspicions that she had feelings for her boyfriend. Especially after Jordana painted a portrait of Juliette for Sam, and they all seemed to think the painting looked more like Jordana than Juliette. Fortunately for Juliette, Sam only had eyes for her, and Jordana moved on to causing drama between Brandon Gomes and Camilla Cattaneo instead.

However, the artist started more trouble during part 1 of Siesta Key season four when she made a joke that she would love to make out with Sam. Now that the second half of the season is airing, fans have gotten a look at the downfall of Sam and Juliette’s relationship. The pair seem to be on different pages, with Juliette moving out so she can focus on herself and her swimwear business and Sam seemingly wanting a more serious relationship. As Juliette and Sam’s relationship comes to an end, it seems like Jordana may be making her move again. The preview for next week’s episode reveals some flirty behavior between the two that Juliette certainly wouldn’t approve of.

Fans are yet to see the start of Jordana and Sam on the show, but Juliette already broke the news of their living arrangement in an Instagram comment. Twitter user @nmkx1x shared a screenshot of the comment on a since-deleted Instagram post from the official Siesta Key account. The deleted post featured a video of Jordana talking to costar Cara Geswelli about relationship drama, and Juliette had quite the response. “Well she lives with Sam now so there’s that lol,” she commented. Fans were freaking out in the comment section while Jordana also replied, seemingly confirming Juliette’s claims. The star wrote, “is that a problem?”

Before living with Sam, Jordana was causing the most issues with Brandon and Camilla. The two were very in love until the musician cheated on Camila and got another woman pregnant and is now co-parenting with her. The pair tried to work things out, but Jordana seemed to keep getting in the way. The two hooked up during the first half of season four while the cast was away on a private island, courtesy of billionaire Sam. Then, during the Siesta Key reunion, Chloe Trautman did what she’s always done best and spilled the news that Jordana and Brandon had hooked up in their New York hotel room the night before the reunion. Jordana was not happy with Brandon’s reaction to everyone finding out about their hookup, and they’ve since called their relationship off.

Certainly, no one saw this coming, but Jordana may have had it planned all along. Juliette knew from the start that Jordana had a thing for Sam, but even she seems quite surprised about the news. While it’s unclear if fans will get to see their new living situation in the current season, it’s clearly not a secret anymore. Maybe things will work out well for Jordana and Sam, but she definitely won’t be building a friendship with Juliette anytime soon.