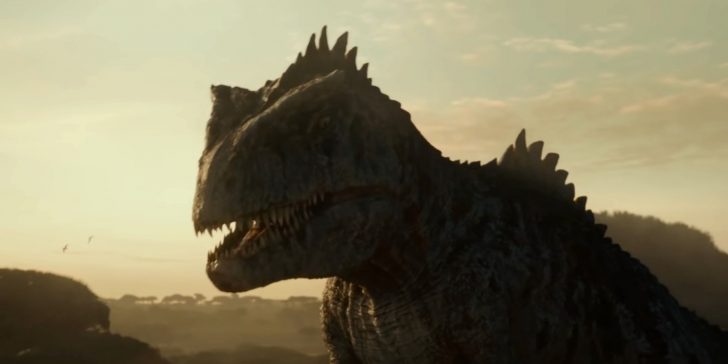 Colin Trevorrow teases the new dinosaur introduced in Jurassic World: Dominion and the kind of threat it poses, likening its mindset to the Joker’s.

Colin Trevorrow, the director of Jurassic World: Dominion, is teasing that the film’s newest dinosaur is like the Joker. The science-fiction adventure movie is set to premiere on June 10, 2022 and serves as the sixth installment in the iconic Jurassic Park franchise, following the calamitous attempts at creating a theme park full of genetically re-created dinosaurs. Stemming from Steven Spielberg’s original 1993 adaptation of the source material, a novel of the same name, Jurassic Park has gone on to become one of the highest-grossing franchises of all time, benefiting in recent years from the success and heightened popularity of its latest trilogy. The upcoming film will act as a sequel to 2018’s Jurassic World: Fallen Kingdom, where audiences last saw the prehistoric creatures freed from the Lockwood estate and Dr. Malcolm declaring a new Jurassic Age.

Set four years after the events of Fallen Kingdom, Jurassic World: Dominion will observe the efforts between humans and dinosaurs to coexist and determine who Earth’s apex predator really is. It will also see the return of Jurassic Park stars Sam Neill, Laura Dern, Jeff Goldblum, and BD Wong, who are reprising their roles from the original film series and joining Chris Pratt, Bryce Dallas Howard, Isabella Sermon, Justice Smith, Daniella Pineda, and Omar Sy. Fans of the franchise have been excited about more than the cast list though, with Jurassic World: Dominion introducing new dinosaurs, like the Giganotosaurus, as the result of being put out into the world and adapting.

Now, Colin Trevorrow is telling Empire more about the Giganotosaurus, a colossal-sized dinosaur capable of taking down the likes of a T-Rex. The largest creature these characters have faced, the “Giga,” as he calls it, will be a dangerous threat. Trevorrow teases that he “wanted something that felt like the Joker,” before adding that “it just wants to watch the world burn.”

In addition to new dinosaurs, Jurassic World: Dominion will also feature new cast members, including Mamoudou Athie, Scott Haze, Dichen Lachman, Campbell Scott, and DeWanda Wise. Exactly how big of a role these actors take on remains to be seen, but Wise recently shared details on her character, Kayla. A pilot in the film, she says that Kayla is fresh out of the Air Force and responsible for flying cargo, though trailers have shown her assisting Owen and Claire as well. It has also been revealed that Campbell Scott will be portraying Dr. Lewis Dodgson, a character who previously appeared in Jurassic Park.

Through all of its promotion and in bringing back stars from the original film, Jurassic World: Dominion has generated a high level of anticipation. It should be interesting to see how these characters interact and how new threats, like the Giganotosaurus, impact the cinematic universe, and possibly the future of the franchise. As it nears closer to its release date, Jurassic World: Dominion will surely entertain and look to bring a successful ending to the trilogy.

More: Jurassic World Dominion Has The Perfect Answer To Your Dinosaur Confusions