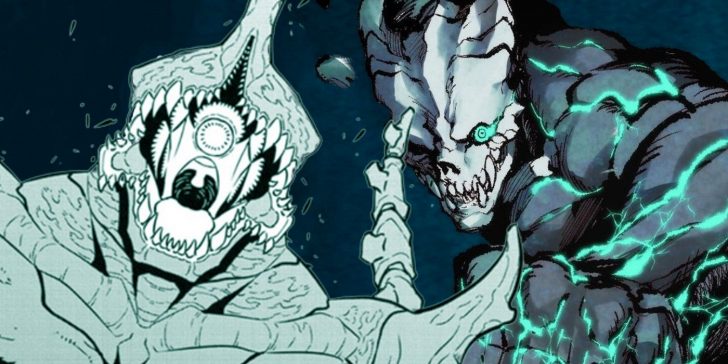 In chapter 57 of Kaiju No. 8, the true identity behind the Defense Force’s tenth numerated kaiju exposes the uncalculatable strength of future kaiju.

Warning! Spoilers ahead for Kaiju No. 8 chapter 57!

The so-called tenth kaiju, which staged such a successful assault on the Defense Force that the anti-Kaiju organization had to completely reorganize its structure, is actually not that strong, contrary to what Kaiju No. 8 fans originally believed.

When the monster first debuted in chapter 24 of Kaiju No. 8 by mangaka Naoya Matsumoto, the later-christened Kaiju No. 10 laid siege on the Defense Force’s third division for nearly 10 installments, knocking out 75% of the base’s functionality. This later gave the organization no other choice but to redistribute all of the division’s members into the Defense Force’s other divisions, a restructuring that is still in effect today. The monster was so powerful, in fact, that the Defense Force decided to assign the creature its numerated designation of particularly strong and influential kaiju – this being the tenth overall and the third in the last year.

But as Kaiju No. 10 tells Vice-Captain Soshiro Hoshina himself in chapter 57, he is actually just a prototype created by the humanoid ninth kaiju. This is particularly troubling as Kaiju No. 10 is registered at being able to generate a fortitude of 9.0, a numbering system created by the Defense Force that measures the strength of kaiju on a scale of 1 to 10. The fact that only a small number of Defense Force members can successfully take on a monster with a fortitude of 9.5, an amount that significantly decreases when there’s more than one kaiju with the same rating involved, puts the anti-Kaiju organization’s situation in a very dismal light. There’s also the possibility that future monsters created by Kaiju No. 9 could potentially exceed the Defense Force’s scale, in turn, overpowering its strongest fighters who can only emulate these monsters’ abilities up to a fortitude of 10. Kafka Hibino himself when he transforms into the series’ eponymous eighth kaiju has a fortitude of 9.8.

But there are more alarming caveats that are more troubling than unfortunate calculations. When presenting these findings to a conference of every Defense Force division leader, Vice-Captain Soshiro comes to the understandable conclusion that their only hope of success is if they work together. This may seem like a small matter, but witnessing how these members interact with one another early on in the chapter proves that this will be an insurmountable feat. The chapter’s earlier scenes reveal that they are incapable of even sitting in the same room without devolving into petty screaming matches. At first, this originally seemed like mangaka Naoya Matsumoto shamelessly dabbling in one of shonen’s ubiquitous use of comically over-the-top interactions among characters who don’t have the best relationship. But it was actually a well-executed foreshadowing of how utterly hopeless their situation is, based on Soshiro’s later assessment and proposed remedy.

The prospect of these divisions uniting is also an effective use of world-building that serves as a logical progression to an earlier development. Before, the majority of the story revolved around division three because that was Kafka’s original assignment when he joined the Defense Force. Upon the tenth kaiju’s assault on their base, Kaiju No. 8 introduced readers to the first division when Kafka was reassigned there. Now, fans will get to see Kafka interact with the entirety of the Defense Force while reuniting with his former comrades who were assigned to different divisions. Additionally, the possibility that these future monsters will go beyond the Defense Force’s 1-10 fortitude scale is another effective use of a common shonen trope, whereby a series’ original understanding of “strongest” suddenly becomes outdated, like Dragon Ball’s introduction of a level beyond Super Saiyan. It was about time, anyway. Kafka can already reach a fortitude of 9.8. That’s a little too strong. But it looks like that’s no longer the case in Kaiju No. 8.

Next: Blue Exorcist Is More About Yukio Than Rin

Peacemaker’s Secret Superpower Is Better Than a Healing Factor