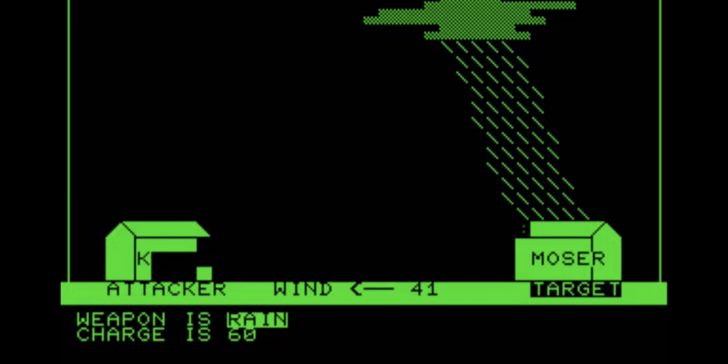 Computers in the mid 70s were a fascinating addition to a home office — and quite an expensive one at that, thus leaving many marketing experts scratching their heads on how to sell them. Sure, they looked neat, but what was the average user supposed to do with them? Computers, for the most part, were not sold with pre-bundled software, and buying programs was easier said than done. Users were often forced to order titles directly from the same computer manufacturers, which often meant having to pay a premium for simple games and programs. There was no way of knowing beforehand the quality of what one was buying. The only other route was doing it yourself — learning how to program. This is how the history of Kate Higby begins.

Higby was one of many young developers who were just starting out at the time, experimenting with their computers at home. For  her and those like her, help came in the form of magazines like Compute! and Cursor. These magazines would print code for programs and games, either developed by the editors themselves or sent in by readers. While the magazines would not allow readers to copy and distribute the programs, they would invite them to tinker with the code, so that they could learn how the computers’ programming languages worked. Some of the magazines did not stop at printing lists of code to type in — they began to act as publishers of games and programs as well, like Cursor did for the Commodore PET. The magazine, distributed in the US by Audiogenic and published by The Code Works, came bundled with a tape or floppy with programs sent in by readers, complete with a small review of what each game and program was supposed to do.

Having your program published by Cursor was not really the beginning of a game development career, but it would get one’s name out and provide connections with readers of the magazine. While it might be easy to think that, back then, it was not common for a woman to be in front of a keyboard programming games, a quick glance at these magazines will reveal quite the opposite. Indeed, programming was a vital skill for developing an understanding of how computers worked, along with empowering users to control them. Among the home computers competing for the market in the late 70s, the Commodore PET was a bit of the underdog, next to the Apple II and the TRS-80. But it had an important feature that the others lacked: the first model of the computer was shipped to market with a datasette unit included. Writing programs and saving them on cassette tapes was, thus, quite cheap. Powered with tape and knowledge, a user could quickly learn how to make best use of their new expensive home computer.

While the majority of the people trying their hands at programming were indeed male, there were several female developers, some of them even regularly providing programs. But there was one major difference between Kate and most of her peers: looking at many of the other programs sent in by her colleagues, they seemed to be, for the most part, quite basic stuff — simple recreations of board games like Go or recipe conversion utilities. Of course, a conversion program like Recipes, sent in by one Nancy Rhodes in 1980, could surely come in handy — but it wasn’t an original game like Higby’s Weather War, which appeared in the July 1980 issue of Cursor Magazine. Weirdly enough, the game was retitled before being published in order to avoid confusion with a program called Weather that Cursor magazine had already featured in a previous issue. Somehow, as it happens, they opted for quite the complicated solution, naming the game after the Greek god of the Heavens: Ouranos.

The gameplay seen in Ouranos was not completely new — it can be described as a variant of Artillery, a classic 70s computer game where two players use cannons to destroy one another. But by exchanging the cannons for weather, the game introduced interesting new variants. Two players take turns trying to destroy each other’s house by using weather related powers (hail, rain, snow, thunder). On each turn, the player has to input a positive or negative value to cast the selected power to the left or right of the single cloud in the sky, which is randomly positioned on each turn. Wind also has to be factored in to aim precisely at the adversary’s house and do the most damage possible.

It was a simple game, naturally, but one that showed quite a bit of programming savvy. And Higby did add a few interesting new features, like “acts of Nature.” These events strike randomly and, accordingly, benefit or punish the two players. The game was mostly programmed using the Commodore PET’s main language, BASIC, but also used a more complicated routine written in assembly to make the screen flash when the lightning hits.

That apparently unimportant single lightning flash routine deserves attention for how it added flair to a program which would, otherwise, just function like many other programs. At the time, most developers were only using BASIC for their programs: a high-level programming language designed to be easy to use, rather than efficient. Assembly was, instead, much more complicated but, by writing closer to what were the machine’s code instructions, it allowed freedom in developing more complex routines, such as an — apparently — simple flash of lightning. While the importance of that flair of programming might be lost today, the influence of Higby’s tiny flash of genius was felt beyond 1980. Indeed, the lightning effect caught the attention of many developers at the time, as evidenced by a reference found in a series of mystery books published in the mid 80s, The Bytes Brothers.

Number three of the series, Enter The Evidence, features a short scene with a young girl in front of the screen, messing around with a few lines of assembly. The lines of code by Higby do make their appearance on the screen, but are never referenced to again, like a sort of Easter Egg for a very niche audience. While a neat homage, the book does not credit her in any way and that, unfortunately, is a dynamic that haunts Higby’s work to this day.

After Ouranos, Higby published another PET game in 1980 for Cursor magazine, called Lawn. The concept would fit right in today’s trend of relaxing games: a simple overhead lawn mowing simulator. The developer again added her own flavor by inserting random events into the otherwise relaxing Sunday-like situation, things like striking a rock, which would make the player lose time.

Then, after 1980, Higby’s work as a developer seemed to disappear altogether from the magazines. Less than two years later, she was busy running her very own software company. Magic Carpet Software, based in Phoenix, Arizona, was a developer and publisher of games for the Commodore PET, VIC-20 and 64. They were part of a colorful tapestry of small companies operating in the US in the 80s, usually out of people’s garages, shipping games around the country on floppy disks or tapes enclosed in zip-loc bags.

Along with Higby, there was another developer whose name is strongly linked to the games published by the company: Robert Carr. His first appearance as a developer was also in Cursor magazine, alongside Higby, with simple games such as Frog and Rain Dance. Based on the clues left in their respective programs, the two — at first living in two different US states — were married by 1982. They were probably, at that point, running the company together, even though advertisements for the company would still mention the name of Katharine as the point of contact. The Magic Carpet company seemed to be plenty active in 1982, publishing ads in several magazines in the US. Along with Weather War and Frog, both first published in Cursor Magazine, the company was also selling other simple games like Vortex Fighter and space shooter Phantom Fighter.

After 1984, news on both the company and the two programmers starts becoming quite scarce, with the last reference appearing in magazine Midnite Software Gazette in 1986. After 1986, both Higby and Carr disappear into history, part of a huge kaleidoscope of US game companies whose history still has to be fully documented.

Magic Carpet came about when computers were becoming widely accepted and many models were on the market. The company, with the two programmers on board, converted several of the games released for PET for other Commodore systems, like the VIC 20 and 64. Unfortunately, during that process they would often swap credits around, so that games previously developed by Higby would be credited to Carr. Given this bit of information, it is sensible to wonder how many of their games, which are now credited to her husband, were actually developed by him alone. This is, indeed, what happened with the more famous version of Ouranos, its 1982 sequel on the Commodore 64: Weather War II.

Perhaps calling it a sequel might not even be the correct definition, since the game is basically the same as its 1980 PET counterpart — so much so that even a slight wind calculation bug that Higby had left in the code in the original game was reproduced untouched in the newer version. All Carr did was adapt the game to the character set of the Commodore 64, substituting the house sprites of the original for fortresses, along with using the more advanced form of BASIC on the more recent Commodore home computer. He did not seem to add any kind of personal touch to the gameplay, but it was still enough to obscure Higby’s name for good. The PET version of Ouranos is, today, just a tiny historical footnote, known only to those familiar with the obscure old home computer, while the Commodore 64 version credited to Carr is the one that people remember.

Time has proven most unkind to the game development efforts of Kate Higby. Not only has her most important contribution been obscured by the version credited to her (then) husband, but one would have quite a hard time even finding her name in any histories of programming or game development. If we assume that she worked on many of the original titles released by Magic Carpet, her credits would probably be much more than the few PET games that we are able to ascertain today. Indeed, this was a notorious problem for many women developers in the 80s.

My research for this article came up with almost nothing on either Higby or Carr after 1986. Higby has since moved from her house in Phoenix, Arizona, the one mentioned in her old programs, but that is the extent of the information I was able to track down. The story of Kate Higby is one of talent that was, sadly, lost to time and history. Still, more than forty years later, Higby remains an important historical figure that stands for the still often-ignored talent of women developers everywhere.