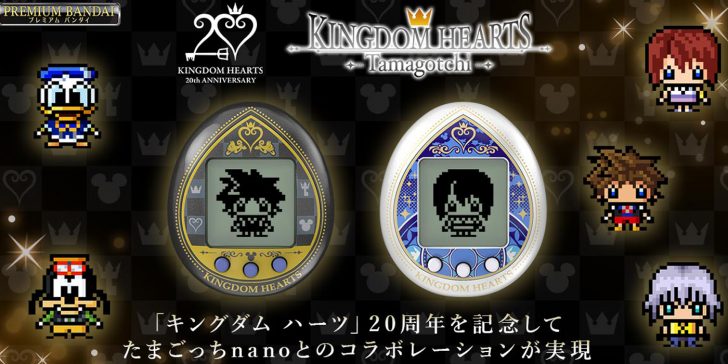 I was going to write some sentimental “Happy Birthday, Kingdom Hearts!” spill, but then Bandai went and casually made the series’ greatest spin-off announcement yet. There’s a Kingdom Hearts Tamagotchi on the way, it’s cute as hell, and I’ve never been so excited about cleaning up poop in my life.

Do Tamagotchi still poop? I don’t know, but I don’t see it in the ‘how to play’ graphic for the KH Tamagotchi. However, thanks to @aittaikimochi on Twitter, I do at least know I can feed Sora paopu fruit and sea salt ice cream, and that’s good enough for me. The tiny keychain friends come in two designs, but for now, it looks like there aren’t any retailers outside of Japan in on the announcement. I don’t care what has to happen; I will have one of these. Maybe both.

I’m absolutely frantic over these things, and I didn’t realize I even still cared about the series that much. I see cute variations of Sora in the character lineup, along with Donald, Goofy, Riku (!), Axel, Shion, a Heartless, Aqua (!!), and others. There’s also that little tease at the bottom of others coming up, and while I’m not sure who they all are, I know Mickey’s big ole head from anywhere.

According to the official Tama Twitter, the Kingdom Hearts Tamagotchi goes on sale today to celebrate the series’ 20th anniversary. They’re 2,530 Yen, so a little over $20 or a year’s salary when the inevitable wave of scalpers come for them.

Historically, the series is pretty near and dear to my heart, but I didn’t care for the third game—a bitterness I’ve since parted with over the last hour. While those feelings do make me kind of hesitant to keep up with the universe, I know damn well there’s gonna be some sort of canonical KH IV tie-in here where we learn that one time someone forgot to feed Kairi and it led to the apocalypse.

Look, I know we’re all really tired of Kingdom Hearts getting spread out across platforms, sure, but this is easily the definitive KH experience. I wish everyone luck in their fight today over these things; I hope we all get tiny Aquas.