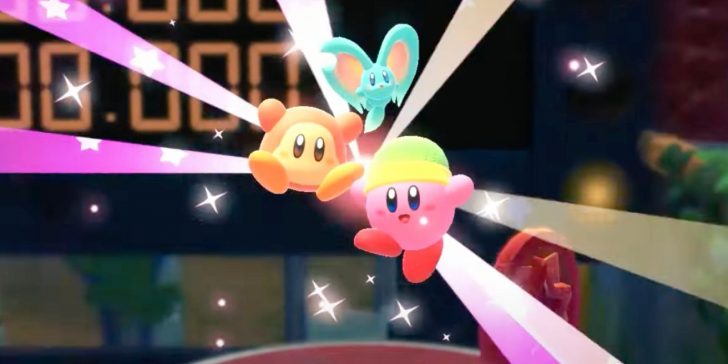 Circuit Speedway has five main objectives to complete in Kirby and the Forgotten Land, including finishing races and saving four Waddle Dees.

The races in Circuit Speedway can be difficult to finish in the short timeframe specified by the goals for this stage, but there are a few tricks that get Kirby to the finish line quicker. Players will need to use the boost ability for the length of the track in each race as well as identify and use shortcuts to reach the finish line in time. There are also enemies and obstacles to dodge as Car Mouth Kirby, but players have the option of clearing the track before using Mouthful Mode.

Related: Where to Find Every Treasure Road in Kirby and the Forgotten Land

The first Kirby and the Forgotten Land Waddle Dee in Circuit Speedway is awarded for finishing the race in 25 seconds, but there’s also an objective for completing it in under 20 seconds. At the beginning of Circuit Speedway, there’s a car that can be used to become Car Mouth Kirby. However, players can also run ahead as regular Kirby to clear the track before completing the race.

Once the race starts, players will need to continuously hold down boost and look out for the white and red stacks of tires. Kirby can jump across the top of the tire stacks to cut through the track instead of going the long way around the turns. There are a few muddy parts of the track to avoid, as well as enemies and obstacles if they weren’t cleared beforehand. As long as Kirby and the Forgotten Land’s Car Mouth Kirby is boosting for the whole race and the shortcuts are used, players should be able to reach the finish line in under 20 seconds. The first Waddle Dee will be on the gold crown pedestal at the end of the race.

Save The Second Waddle Dee

After the first race, there are a few areas of Circuit Speedway to complete before reaching the second Car Mouth Kirby section. In the same area where the first Toy Capsule is, the second Waddle Dee can be rescued. At the bottom of the stairs where a Jabhog is waiting, there’s an opening in the fence to the left with a platform moving back and forth. Kirby can throw a bomb to hit the button on the platform which will open the gate to the left.

In the room past the gate, there’s another set of moving platforms with a button at the end. A bomb can be thrown just as the two platforms touch in order to reach the button with the correct timing. Hitting the button will open the gate trapping Kirby and the Forgotten Land’s second Waddle Dee in Circuit Speedway. After rescuing the Waddle Dee, Kirby can also grab the Invincible Candy from this room before exiting.

In the area with the second Waddle Dee, there’s a ladder leading up to a chest that contains the Invincible Candy. Since Invincible Candies only last a short time, players will need to run to the mini-boss arena to quickly defeat Wild Edge before the effects wear off. Immediately after opening the chest, players can go back to the area they came from, then run past the enemies and into the next section. In the next area, players can run up the stairs and jump into the circular arena so Wild Edge spawns.

Related: How to Unlock the Colosseum in Kirby and the Forgotten Land

If the Invincible Candy is still active, Wild Edge will be defeated immediately after coming in contact with Kirby. The chest straight ahead of the arena contains the Gigant Sword Blueprint. This Copy Ability upgrade can be applied at the Waddle Dee’s Weapons Shop in Kirby and the Forgotten Land’s Waddle Dee Town. After collecting the Blueprint, players can find the third Waddle Dee before reaching the final race in Circuit Speedway.

Save The Third Waddle Dee

When Wild Edge is defeated, the Cutter Copy Ability will drop, and players will need to switch to this ability to find the third Waddle Dee. Near the exit for this area on the right side, there’s a secret area covered by bushes. Players can cut the plants down and enter through the small opening to find the third Waddle Dee trapped in a treasure chest. After collecting the Waddle Dee, players can head to the next area to complete the final race in Circuit Speedway.

Boost Through The Cardboard Shortcuts & Save The Fourth Waddle Dee

The final race needs to be completed in under 50 seconds to save Kirby and the Forgotten Land’s last Waddle Dee in Circuit Speedway. Players will also need to boost through the two cardboard shortcuts along the track. From the starting line, players should go up the ramp and jump off to the lower part of the track on the right. The first cardboard shortcut is in the fence just before the road curves, so Kirby will need to jump through the boxes while boosting. From there, players can drive around the circular platform until reaching the low white ramp.

At the ramp, players should jump off the track heading north to boost through the second cardboard shortcut. There are two more circular platforms after the shortcut that are spinning in opposite directions, so players should go around to the right first, then on the left side of the second one. Kirby can then jump up the ramps instead of driving around the turns to save some time and rescue the last Kirby and the Forgotten Land Waddle Dee. After the ramps, the final stretch on this track has a pattern of obstacles to avoid. There will be one obstacle in the middle, then two on either side in a repeating pattern until the finish line. If all the shortcuts are taken, players should reach the end in around 40 seconds. Once the race is finished, players can collect the fourth Waddle Dee from the pedestal. The end of the Circuit Speedway stage in Kirby and the Forgotten Land is just to the right of the pedestals, and exiting will unlock the next level in Wondaria Remains.

Next: Kirby and the Forgotten Land: How to Unlock Every Ending

Kirby and the Forgotten Land is available for Nintendo Switch.

Elden Ring Is Anime For People Who Hate Anime