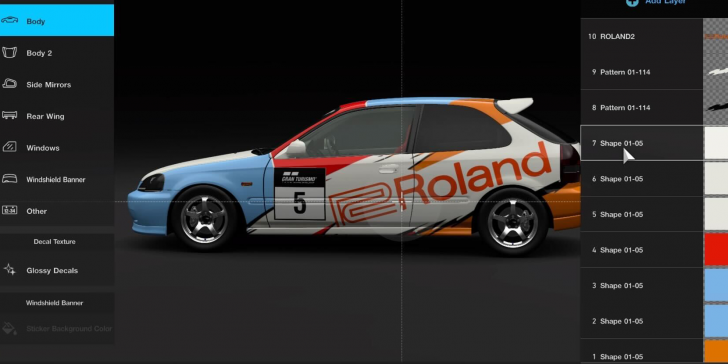 Casual Encounters is a column by LB Hunktears, Fanbyte’s resident casual gamer, about what they’re playing — from mobile free-to-plays to console releases, always through a non-expert lens.

The best kind of game is a dress-up game.

I’m a few months into playing driving games, having picked up Forza Horizon 5 on Gamepass and then starting Gran Turismo 7 when it came out last month, and I’m going to say something potentially controversial…

Driving games are the best dress-up games of all.

I went pretty wild in the livery editor for Forza, customizing the cars they practically threw at me as I made my way through the game, getting into layers and gradients and masking. So by the time I started GT7? I was ready.

I started simple, with racing stripes and cool colors, and things escalated pretty quickly. I got angry at muscle cars for being difficult to handle, and took out my frustration by giving my 1971 Mustang a truly embarrassing looking Subway livery. Making a pattern of the Subway logo on the roof of the car unlocked something inside of me. I mentioned it when I wrote about cottagecore maximalism in The Sims and found it once again in these livery editors.

Arranging chaotic visual elements into something harmonious just feels good. Especially when I’m able to maintain a sense of chaos in the harmony— serotonin goes brrrrr.

Cars are perfect for this. Racecar liveries are cluttered with sponsors in a way I always used to find ugly to look at, but has now grown on me. I blame Formula 1 for opening my mind, but I’d never appreciated the serifs on the Dunlop logo until I started fucking around with livery editors. Now I’m a burgeoning livery freak, with favorite eras, favorite sponsor logos, and newly formed but firmly held opinions about what looks good.

I’d done some goofy stuff with brands in Forza (namely making a LOONA drifting car), but my eyes weren’t open to the possibilities of racecar liveries until I was doing some research and a good friend introduced me to the world of 1990s Super Touring. Getting into the history of liveries is the perfect accompaniment to the rhythms of Gran Turismo 7, a game whose story mode is more or less learning the history of cars from a friendly jpeg of a middle aged man.

What better way to unlearn my prejudices against BMWs (because they never signal and always behave poorly on the streets of LA) than by falling in love with the Listerine-sponsored M3 that won the 1992 British Touring Car Championship? (It has a fucking dragon on the hood.) What better way to distract myself from the frustrations of trying to get a Porsche around the track at Spa without crashing than to drool over the flat fuck Friday perfection of Porsche’s classic 917 endurance liveries?

I love to make something look cute in any dress-up game that I play, whether I’m fighting with a big cute sword, defeating vampires while looking cute, or being a cute little guy driving around. What puts a livery editor like the one in GT7 over even the most robust character creation modern AAA gaming has to offer is the fact that GT7 doesn’t just want you to love cars, it expects you to already love cars. Even on my PS4 (where the load times are not great), my cars look beautiful. My options for photographing my beautiful cars go so far beyond the simple screenshot, with the ability to go through replays of every one of my races after the fact to take fabulous photos, or to shoot my cars under the bright lights of Akihabara, in the dramatic glaciers of Iceland, on a rainy cobblestone street in Europe, or even atop a garage in Downtown LA for maximum realism. Is it vain of me to finally understand the appeal of a glossy sports car poster now that I’ve seen what my Dreamcast/Gateway 1998 Civic Type R looks like parked along Copenhagen’s Sydhavnen Waterway at sunset?

Maybe, but can you blame me?

I’m not great at driving games (especially not once I hook up my racing wheel), and that broken economy you keep hearing about in GT7 is in fact pretty broken, so having something like the livery editor to really sink my teeth into makes the game considerably more rewarding for me. Sure I crash, sure I spin out, sure I go too deep into corners and have to keep turning automatic transmission back on. But I look great when I do it. And even if my driving isn’t improving, my livery designs are.