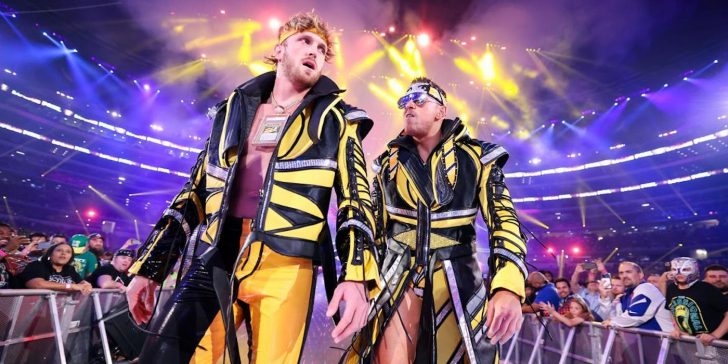 I barely know who Logan Paul is. I will admit to watching a couple of boxing matches hoping to see him or his brother get knocked out by reputation alone, only to find myself disappointed in the ability of people who are good with their fists to deliver the kind of justice the brothers Paul deserve for their various crimes against the internet, youth culture, sports, collecting stuff, all 898 or so Pokémon, and the sacred institution that is professional wrestling.

If you had asked me a year ago, I wouldn’t have been able to tell you why WWE thought it was a good idea to have him around. He has a massive presence on YouTube and other social media platforms, but in the midst of cratering viewership spurred by its plodding Thunderdome era product, only a weird algorithm could say how much Paul was doing for the company as a guy who mostly stood around and watched things happen around him.

Paul actually competed at WrestleMania 38, teaming with The Miz to take on Rey and Dominik Mysterio, and the press they’ve gotten from mainstream publications, which is something WWE prizes above everything, has been massive. A lot of it focuses on Paul’s athletic prowess, but if I cared about that I’d have to care about every doof who can do a box jump. I’d have to care about Pat McAfee. I refuse.

Rather, I’m interested in the other aspect of the match that got a lot of press, which is the $5,275,000 Pokémon card hanging around his neck, which he wore on a lanyard sporting a jewel-encrusted Pokéball.

I’m not going to lavish detail on the Pikachu card’s scarcity or it’s PSA grade—a man-made object is worth the cost of its materials and the labor used to produce it, and in an age where the reproducibility of any such object is near-infinite, any kind of scarcity or dollar amount you want to attach to a thin slip of cardboard in any condition is just marketing.

What I want to talk about, however, is the utility of the Pokémon card as an object in wrestling.

Logan Paul’s Pikachu card, believe it or not, is a throwback to the heady days of the Four Horsemen at their peak. I feel awful saying it, but it’s not a weapon, like Chyna and Eddie Guerrero’s loaded bouquet of roses, and it’s not a prop that meets some horrible, tangible fate like Ted DiBiase’s Million Dollar Championship, Razor Ramon’s chains, Paul Bearer’s urn, Saturn’s mop, or Chavo Guerrero’s hobby horse. It is the Rolex Ric Flair flashes in front the the camera, the alligator shoes he throws into the crowd because he can afford another pair. It’s the fur coats Magnum TA and Dusty Rhodes wear to prove they’re as upper crust as any Horseman. Enrobed in the ugliest plastic casing imaginable, Logan Paul’s Pokémon card is a Lear jet made tangible—you can see it, you can know it’s value, but the only person who gets to touch it is the douchebag who thinks it’s cool to show off.

Someday Pikachu too will be dust.

Pikachu did not wrestle, despite being a luchador like Rey Mysterio, Jr.
Rey Mysterio, Jr. did not counter the Pikachu card by wearing a Bulbasaur mask and costume.
Logan Paul did not use the blunt edge of his PSA 10 graded Pikachu Illustrator Pokémon card to shred Rey’s mask, nor bloody him up a little.
Nobody even tried to steal the fucking thing. Vince McMahon lost his egg as soon as he turned his back; is the timekeeper truly above replacing the card on Paul’s lanyard with a perfect forgery?
Dominik Mysterio seemed completely unaware of Pikachu. I’m worried that he grew up in a Pokémon lull.
Nobody said “Pika pika.”
Idk when the revolution is coming.