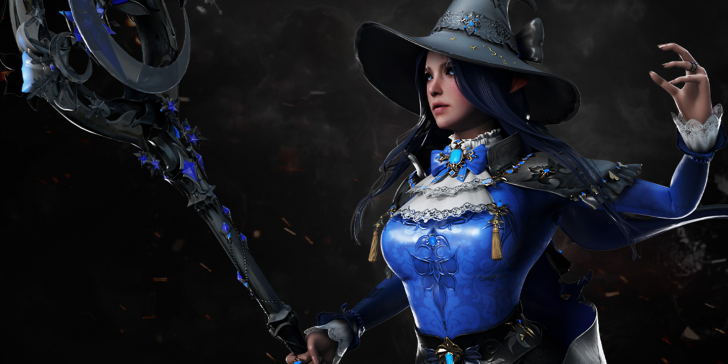 Lost Ark features a wide variety of classes that each carry the potential to deal heavy damage, but none are quite as explosive as the Sorceress. If you’re interested in playing as a traditional magic-user who excels in PVE, similar to Diablo 3’s Wizard, this is the class you want to check out. Speccing your Sorceress can seem a bit confusing at first, especially when you’re unsure of what each stat does or if you’re still weighing out the best engravings to equip, but this Lost Ark Sorceress PVE Build guide will give you a solid foundation to build your character around.

There’s plenty of leeway to customize your Sorceress as you see fit, especially once you unlock the Book of Coordination and begin to play with different custom builds based on Lost Ark’s robust skill system. It’s also wonderful that you can respec your skills at any point to play with different combinations of skills and upgrades. However, there are some general rules of thumb that you want to follow when you’re first getting started building your PVE Sorceress. There are two primary Sorceress engravings, and they are mutually exclusive, which means that you want to branch your build in either of two directions. Whichever direction you choose ultimately dictates the way you allocate your combat stat points, but not necessarily your combat skills. On a related note, the Sorceress is a purely offensive class no matter how you swing it, so I’m of the opinion that you should be doing the most damage possible (over the widest amount of turf) and both my combat stats and my skills are set up to reflect that.

Assuming that you’re already level 50, completed the North Vern area, and have earned enough skill points to have a total pool of 340 skill points to allocate — as in the Book of Coordination — you have access to everything mentioned in this section of our Lost Ark Sorceress guide. Again, your Sorceress will probably end up being unique to your personal tastes and your own playstyle, but it’s worth testing your build with the following skills, and then deviating from there as you see fit:

With this setup, you give yourself a strong rotation that covers each of your bases. At close range, you generally want to alternate between your Squall, Blaze, and Seraphic Charge, each of which carry low cooldown times and deliver high DPS. All are good for dispatching foes standing immediately in the way of your Sorceress, and by rotating between the three, you establish your first and best line of defense against taking damage. Since the Lost Ark Sorceress is quite squishy no matter how you choose to specialize, you should always seek to do as much damage as possible and get away from foes while the melee-focused characters in your party take the enemy’s focus off of you.

To control the battlefield, the Lost Ark Sorceress relies on point-based AOE skills that affect a target area and wear down opponents over time. The first and best skill here is your Lightning Vortex, which is available every 12 seconds and only costs about 412 MP a pop, making it a great tactical ability for dealing lots of lightning damage and/or keeping enemies away from a specific area without costing you any mobility. You can also throw in a Rime Arrow, which continuously deals frost damage and momentarily slows enemies down when the Chill upgrade is applied at tier one. The latter has a cooldown of 18 seconds, making it work well as a supplement to your Lightning Vortex. Once again, these point-based AOE skills work well to deny enemies an opportunity to close in on your position, but this makes them especially useful to fire off before you start spinning up your bigger attacks.

Speaking of bigger attacks, it’s worth kitting out your Lost Ark Sorceress’s arsenal with a few casting or holding skills. If you follow the guidelines above, you get the powerful Doomsday, Punishing Strike, and Frost’s Call spells. For reference: the former two are casting skills, whereas the latter is a holding skill. All casting skills require you to stand in one position while a timer counts down, and are interrupted if you take damage or get pushed/staggered before the timer runs out. Holding skills work similarly, but instead of tapping once and waiting out a timer, the Sorceress casts her spell over time for as long as you hold down the key that the skill is assigned to. Cooldowns are a bit longer here, so as a rule, it’s best to hold off from activating any casting or holding skills until you’re out of immediate danger and can comfortably fire them off from a distance.

Doomsday summons a giant meteor at the target location, dealing a base 18,628 fire damage when specced out as described above. The cooldown of 32 seconds makes it almost as powerful as your much less accessible Awakening skill. Punishing Strike with the Electric Discharge and Final Strike specializations casts several bolts of lightning that each have a high critical potential. Meanwhile, your Frost’s Call ability can stop large groups of enemies in their tracks with the Chill specialization, and also has a high crit potential with the Final Strike specialization.

If you absolutely need to, you can also rely on your Awakening Skill, Enviska’s Might, to deal massive AOE DPS in a short period of time. This is great if things get too dangerous, but you can only activate it every five minutes and it costs one Chaos Shard from your inventory every time you use it. Once equipped, it’s activated by pressing the V key.

No matter which engravings, cards, or combat stats you choose, your skills should work exactly as you specialize them in the skill menu.

Note: Cards in Lost Ark give you a noticeable benefit when equipped as a complete set. The card set that is most beneficial to any PVE Sorceress, regardless of build, is the Trixion set, which gives a bonus of +15% Elemental Damage Reduction and +14% Elemental Damage when all six cards are equipped in the Card Collection menu.

From here, you want to continue specializing your engravings and combat stats to make your build more concise around your exact playstyle. As you specialize further, you are strongly encouraged to focus your build around one of the two class-specific engravings that apply to the Sorceress: Reflux or Igniter. These engravings are mutually exclusive in practice, and each one directly affects the Sorceress’s Arcane Rupture special ability. All engravings are slowly earned by collecting and reading Engraving Recipe Books, which are obtained through quests. It takes time and effort to unlock and power up each engraving to tier three, so you want to be deliberate in how you spec your engravings here. You can view a full list of engravings and their descriptions and effects in Lost Ark’s Book of Coordination menu. Reflux shuts off your ability to use Arcane Rupture entirely, but comes with a tradeoff. When equipped, you gain a sharp passive increase to your base damage-dealing capabilities. At tier three, the Reflux engraving offers a +16% Damage to skills (except Awakening and movement skills), as well as a -10% to all Cooldowns.

To make this Sorceress excel, pair your Reflux engraving with others that sharply boost your DPS, such as Adrenaline, All-Out Attack, and Ether Predator to name a few. Experimentation is highly suggested here, since your other engravings will decide your exact playstyle. For instance, a purely lightning-focused Sorceress can always benefit from taking the Lightning Fury engraving.

Combat stats in Lost Ark are confusing to the untrained eye. Your base stats (Intelligence, Vitality, etc) are largely influenced by your equipment, but then you have to manually allocate points into a completely separate set of combat stats that act as modifiers to specific parts of your build. When choosing your combat stats as a Reflux Sorceress, you can comfortably ignore everything besides Crit and Swiftness. You may benefit from adding some points to Domination as well, but a Reflux Sorceress excels when landing as many critical hits as possible, as often as possible. The least useful stat in this instance is Specialization as it affects your arcane meter build-up and is rendered obsolete when Arcane Rupture is disabled. The Igniter engraving works opposite of Reflux. Instead of turning off your Arcane Rupture, it supercharges it with a temporary boost to spell cooldowns, crit rates, and crit damage. At the third tier, that means -50% Cooldowns, +25% Crit Rate, and +50% Crit Damage while activated.

This is a far more tactical and arguably tougher build to play than the Reflux build, since you only get a limited window to wreak havoc, and so it’s critically important to keep your Mysterious Magick Meter flowing as steadily as you can. The Mysterious Magick Meter is just another name for the arcane meter located at the bottom of your screen that dictates how often and for how long you can activate your Arcane Rupture state.

Specialization determines how fast your arcane meter fills up (and how powerful your attacks are while you’re in that state), so you want to allocate as many points into the Specialization pool as you possibly can, followed by Crit and Swiftness in that order.You also want to pair Igniter with damage-boosting engravings like Adrenaline and All-Out Attack. There are no engravings that specifically make your arcane meter raise faster, but you fill it organically as you deal damage and blast your way through opponents.

That’s it for our Sorceress PVE build guide. No matter which type of Sorceress you choose to play, the forces of chaos and destruction are at your beck and call. This class is chronically valuable in Lost Ark’s plethora of raids and dungeons, where the Sorceress can comfortably pressure bosses and vaporize large groups of enemies with a wave of their hand. If you’re hungry for more Lost Ark knowledge, here’s our guide on 16 things you might have missed. Until then; fare thee well, adventurer, and happy hunting!