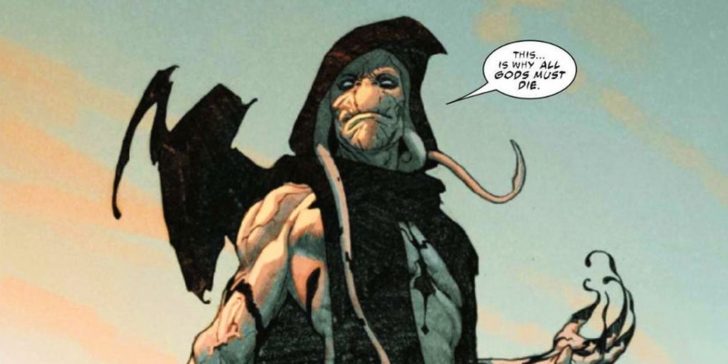 New Thor: Love and Thunder promotional art gives a detailed look at Christian Bale as Gorr the God Butcher, as well as the villain’s mighty weapon.

A new Thor: Love and Thunder art image gives audiences another look at Christian Bale as Gorr the God Butcher, and highlights the character’s menacing weapon. Continuing the story of the MCU’s God of Thunder, the film is the highly anticipated fourth installment in the Thor series. Thor: Love and Thunder is helmed by the returning Taika Waititi, who also directed Thor: Ragnarok, and his film is next in the queue to hit theaters after next month’s Doctor Strange in the Multiverse of Madness, releasing on July 8.

The latest Thor film is set to follow on from the events of Thor: Ragnarok and Avengers: Endgame, which saw the destruction of Asgard, and the creation of New Asgard on Earth. It will introduce Bale’s Gorr the God Butcher as the film’s main villain, who, as his name suggests, considers all gods to be his enemies. In the comic-book source material, the character wields the mighty weapon All-Black the Necrosword, which grants him terrifying abilities. The weapon has a rich and detailed history, forged from the skull of a celestial, and was even used by Thor to battle Galactus.

Now, an image of new promotional material for Thor: Love and Thunder reveals a detailed look at the villainous Gorr, and a glimpse of his menacing weapon. The image shared to Reddit shows the character wrapped in white robes and dragging a sword behind him, which many will assume is All-Black the Necrosword. With his arms covered in scarring, Bale’s own features are just about recognizable under the makeup, and the promotional text on the image explains that the character “will let nothing stand in his way.” Check out the image in the post below:

MCU fans have been clamoring for a first Thor: Love and Thunder trailer over the past few months, desperate to get a glimpse of the film. In the absence of that, posts like this will have to do, although the image doesn’t give much away about the upcoming film. The art does, however, highlight that the character design for Gorr the God Butcher is set to differ significantly to the comics version, while the aesthetic of his weapon looks to have been toned down as well.

Audiences will hope that Bale’s version of the Marvel villain can break the MCU’s unfortunate relationship with forgettable antagonists, which have been a feature of the franchise since it began with Iron Man in 2008. Gorr the God Butcher isn’t the only part of Thor: Love and Thunder that fans are excited to see, however, as Natalie Portman’s return to the Thor franchise is arguably the upcoming film’s most interesting feature. Portman will reprise her role as Jane Foster and looks set to take on Thor’s title as the God of Thunder as she undergoes treatment for cancer. However, audiences will have to wait until the trailer’s release for a closer look at her character, as well as Gorr and his threatening weapon.

James is a freelance writer from the UK. When he’s not watching Star Trek or playing Skyrim, he’s probably surfing or walking his dog. After graduating from the University of York with a degree in bioarchaeology, James covered international science news and worked as an editor before joining Screen Rant’s entertainment team.