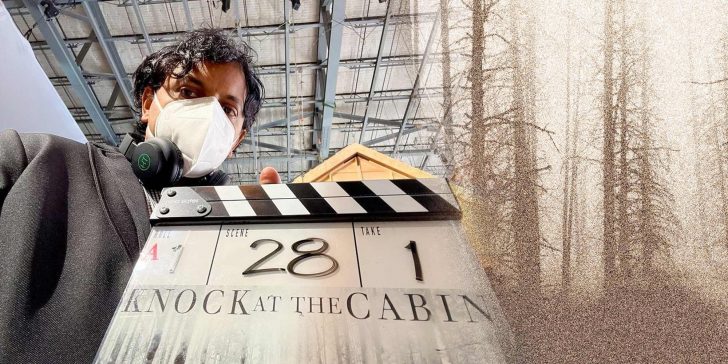 Director M. Night Shyamalan has begun filming his latest feature film Knock at the Cabin, which is set for release on February 23rd, 2023.

Director M. Night Shyamalan has begun production on his latest film, Knock at the Cabin. Shyamalan is the prolific director known for his shocking endings, which began with 1999’s The Sixth Sense starring Bruce Willis. Since that time, Shyamalan has become synonymous with his high-concept thrillers that typically hinge on a major twist at some point in the story that alters the trajectory of the film. From Unbreakable to The Village to Signs to his most recent film, Old, the director has maintained this standard for the most part, occasionally making a more straight narrative feature in between.

Shyamalan recently announced Knock at the Cabin as his next feature, along with the release date of February 23, 2023. The cast for the film includes Rupert Grint, Dave Bautista, Jonathan Groff, Nikki Amuka-Bird, Ben Aldridge, and William Ragsdale. The plot for Knock at the Cabin has been kept under wraps, as with most of Shyamalan’s films, although it appears to be something akin to a horror film. However, with Shyamalan’s usual twists, it could be anyone’s guess what the film is actually about.

In a recent Twitter post, Shyamalan announced that filming has commenced on Knock at the Cabin, noting that it will be his fifteenth feature film to date. The director shared a picture of the clapperboard with the film’s logo, which appears hovering in a foggy, wooded area, giving it a bit of a horror vibe. Shyamalan has previously said that Knock at the Cabin was the fastest script he’s ever written (beating out Signs) and is a “tight” 100 pages. Check out Shyamalan’s post below:

Shyamalan also acts as a producer for the Apple TV+ series Servant (also starring Grint), now in its third season, as well as the upcoming thriller The Vanishings at Caddo Lake with Lauren Ambrose and Dylan O’Brien. The director had planned to re-team with his The Sixth Sense, Unbreakable, and Glass star Bruce Willis for a script called Labor of Love as far back as 2014, but Willis recently retired due to a diagnosis of Aphasia. In the wake of the announcement, Shyamalan shared his support for Willis, saying, “He will always be that hero on that poster on my wall as kid.”

While Shyamalan hasn’t delivered a consistent string of hits in his career, he’s remained one of the most interesting filmmakers working today. He champions the theatrical experience and even when his big twists or wild ideas don’t always come to fruition, they still make for some good entertainment. Plus Shyamalan continues to stand as someone who challenges and pushes himself when inspiration strikes. The director seems to be at his best when he’s following his intuition, rather than making big studio films, and Knock at the Cabin seems to be another film in that vein, even with so little known about it right now.

Next: Why M. Night Shyamalan’s Movie Twists Are So Divisive