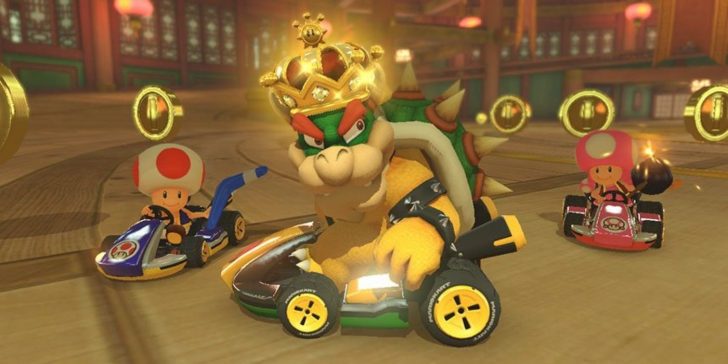 After Mario Kart 8 sold more than 50 million copies, one of the game’s producers explains how the game’s design was a perfect match for the Switch.

The long-running success of Mario Kart 8 on the Nintendo Switch and Wii U has one of the game’s producers reflecting on what helped it stay relevant and sell more than 50 million copies. With each new Nintendo console released, fans are usually treated to new games for familiar staples such as Super Smash Bros., The Legend of Zelda, and the party game Mario Kart. The Wii U struggled to find the success that easily came to many of the company’s other devices. However, Mario Kart 8 became a hit for the Wii U, and it was upgraded with new content and released for the Nintendo Switch as Mario Kart 8 Deluxe. Almost five years after that re-release, it’s receiving a considerable amount of additional content, helping a game initially released on the Wii U in 2014 stay relevant and popular in 2022.

The first of six planned Mario Kart Booster Course Pass waves was released last month for Mario Kart 8 Deluxe. After all six waves are available,  a total of 48 additional maps will have been added to the game, doubling its size at launch. Each map will be a remaster from the vast library of courses from previous Mario Kart games. This news may disappoint fans looking forward to new content for the franchise, especially those eagerly awaiting the rumored Mario Kart 9. However, Deluxe has managed to defeat both Super Smash Bros. Ultimate and Animal Crossing: New Horizons as the best-selling Nintendo Switch game, meaning that even after all this time, the game has something good going for it.

The Nintendo Switch’s portable nature and split controller design were the perfect combination for Mario Kart 8 Deluxe’s massive success, according to one of the game’s producers, Kosuke Yabuki. As reported by Nintendo Everything, Yabuki spoke on the game’s enormous success with the Japanese outlet Nikkei. He explains that the Switch’s detachable controllers make playing the game with a sibling or friend incredibly easy. That fact, plus the gameplay balance that is designed to be fun for both casual and hardcore Mario Kart players, greatly fueled the game’s appeal. Yabuki and the team behind the creation of Mario Kart 8 strived to make a game that would have players experience emotions beyond the race’s outcome and still want to play another round even after a frustrating loss.

The Mario Kart franchise has consistently been successful at creating a fun party game that almost all ages can enjoy. Not many video games manage to appeal to as broad a demographic as Mario Kart. Many fans of the series have been playing the games for years. Given the scope of Mario Kart 8’s DLC plans, there is a good chance that fans of all ages will see some of their favorite levels added to Mario Kart 8 Deluxe through the upcoming DLC.

Mario Kart 8 Deluxe on the Nintendo Switch has sold more copies than both Super Mario Odyssey and Super Mario Party combined. The game’s incredible success explains why Nintendo has chosen to continue developing content for Deluxe rather than dedicating its time and talents to a new title. However, rumors suggest that development of Mario Kart 9 is underway while a separate team at Bandai Namco works on Mario Kart 8 Deluxe’s DLC courses. That being said, a release date for the new Mario Kart game is likely further away than some fans hope.

Mario Kart 8 Deluxe is available on the Nintendo Switch.

Jason Hon is a Gaming News Writer and creator of Comedic Gaming Youtube Channel Honzy and Friends! Within him lies a colossal passion for Gaming, Shonen, and making people smile. He graduated from The Los Angeles Film School and performs improv comedy.
He lives with his wife and two cats in Iowa, USA.