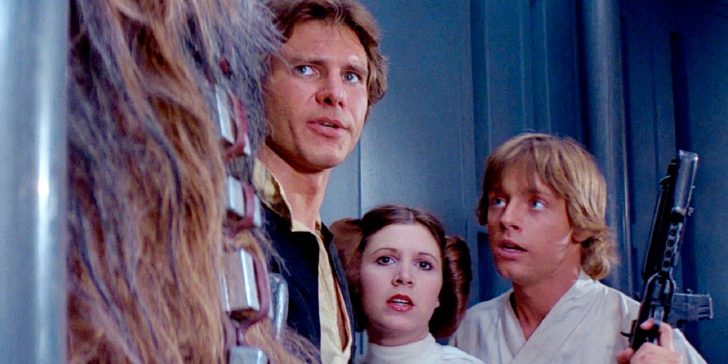 Mark Hamill posts a funny BTS video from the set of Star Wars: A New Hope that shows the cast’s light-hearted teasing of director George Lucas.

Mark Hamill just shared a behind-the-scenes video of himself and his co-stars, Harrison Ford and Carrie Fisher, from the set of Star Wars: A New Hope, having fun by teasing director George Lucas. All three actors were relatively unknown before they were cast in Lucas’ 1977 science-fiction space-opera and were shocked when the film with a meager budget of $11 million broke box office records and grossed $530 million globally. Audiences gravitated towards the story of Hamill’s character of Luke Skywalker being thrust from his small world of moisture farming on Tatooine into a galaxy-wide battle between good and evil that started him on the path of becoming a Jedi Master. The scruffy  scoundrel with a heart of gold, Han Solo (Ford), and the unwavering leader of the Rebel Alliance, Princess Leia Organa (Fisher), also made for iconic characters that audiences couldn’t get enough of.

After A New Hope’s success, the trio of Hamill, Harrison, and Fisher reprised their roles in two more films to round out the original trilogy and returned again in the most recent sequel trilogy that started with Star Wars: The Force Awakens in 2015. All three actors became good friends after A New Hope, and Hamill and Ford were devastated by the loss of Fisher from complications due to a heart attack in 2016. While Ford’s time in the Star Wars universe concluded with Force Awakens, Hamill has continued to come back to Star Wars in one way or another. Most recently, the actor has made appearances in season 2 of The Mandalorian and The Book of Boba Fett as a Jedi mentor to the young force-sensitive Grogu.

Hamill took to Instagram to post a BTS video from the set of A New Hope of himself, Ford, and Fisher shooting a take running through the hallways of the Death Star and then teasing Lucas that a mic was in frame by repeating the line, “the mic was in picture.” Hamill started the caption of his post by saying that the most fun he had on set was when he was working with Ford and Fisher and got to goof around on set. But it seems that the teasing of Lucas was all in good fun with Hamill writing in his caption that their “goofiness always seemed to cheer [Lucas] up.” Check out Hamill’s post below:

In light of Fisher’s passing, BTS videos like these are all the more sentimental to the people who knew her personally and the fans who adore her around the world. Watching how all three actors feed off each other’s energy to start teasing Lucas shows that their chemistry was just as strong off screen, as it was on screen. Hamill’s caption also reflects that he knew that their actions were probably a little obnoxious, with the tag #StarWarsBTS_Tomfoolery, but everyone in the video is still having a good time and ended up making one of the most well-known films in the world. While Lucas didn’t direct another Star Wars film until 1999, it probably had more to do with the immense artistic pressure and less to do with a cast having too much fun on set.

The fact that Hamill’s video has garnered over a million views and a quarter million likes in under 24 hours speaks to the devotion that fans have to Star Wars content and their appreciation for the film that started a franchise. The existence of this video is also a tribute to the significance of early Star Wars BTS content since it was created prior to the digital age, where the expectation of substantial BTS content has become a lot more prevalent. The camaraderie a cast has can make or break a film, and the relationship that the trio of actors had certainly contributed to how influential A New Hope was in its inception of tales from a galaxy far, far away.

Shelby Wyatt has been a news writer for Screen Rant since March 2022. They have been a published writer/photographer for over two years and are more than excited to get into the business of writing entertainment news.

They are currently based out of Albuquerque, NM where they live with their partner and the world’s cutest corgi mix named Radar. Ever since they were a child they have loved all that’s nerdy, geeky and everything in between. One of their biggest dreams is to get to attend the San Diego Comic Con someday.