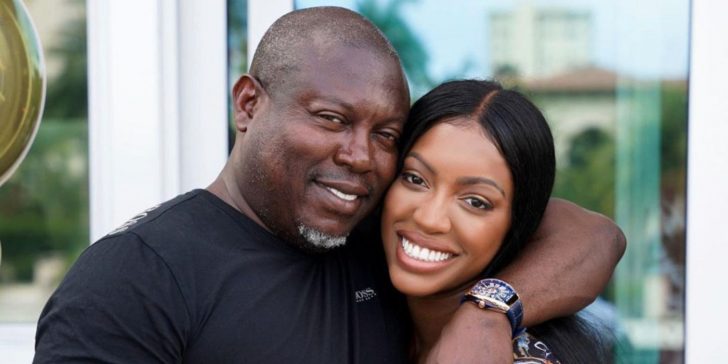 Marlo Hampton is throwing shade at Porsha Williams and implying The Real Housewives of Atlanta alum is with Simon Guobadia for his money.

Marlo Hampton is throwing shade at Porsha Williams and implying The Real Housewives of Atlanta alum is with Simon Guobadia for his money. Porsha skipped out on returning to what turned out to be Marlo’s first season as a full-time housewife. But that isn’t stopping the newest peach holder from passing judgment on the controversy surrounding Porsha’s relationship. Marlo appears to be under the impression that Porsha is using Simon for the lavish lifestyle he helps her maintain.

Porsha opted out of returning to season 14 after becoming at the center of a scandal over her love life. It was shortly after the season 13 reunion aired when Porsha and Simon announced their engagement on social media. Fans were shocked considering Simon appeared in season 13 alongside his then-wife Falynn Guobadia. Despite Falynn appearing on the show as “Porsha’s friend,” Porsha claimed she and Falynn weren’t friends when announcing her engagement to Falynn’s ex-husband. When Porsha ended up announcing her exit from RHOA, fans assumed it was to avoid dealing with the ladies confronting her about her controversial relationship.

But just because Porsha isn’t on the show doesn’t mean she’s exempt from being talked about. Marlo recently appeared on Watch What Happens Live and was asked if she thinks Porsha and Simon’s relationship will stand the test of time. “As long as his money doesn’t run out, they definitely have it,” Marlo shadily said in response. “What I think, is as long as his money keeps flowing, they’re good to go,” she quipped. “I try to be authentic,” Marlo added before jokingly mentioning how “Simon is going to write a long-a– paragraph about me tomorrow,” on social media. The shady remark is likely what Porsha was trying to avoid when opting out of returning to season 14.

Recent photos show Marlo hanging out with Falynn whom she invited to one of her events. The move suggests Marlo is siding with Falynn when it comes to Simon quickly rebounding with Porsha. But Simon wasn’t the only one. Falynn has already welcomed a child with her current fiance Jaylan Banks. Simon had accused Falynn of cheating on him with Jaylan during their marriage. Simon was very vocal on social media in the months after announcing his engagement. He wouldn’t allow Falynn to paint a false narrative of him and continued to post lengthy captions to defend his name.

More was revealed when Porsha starred in her solo spin-off Porsha’s Family Matters. But fans weren’t on Porsha’s side. Many criticized her treatment of her family members and disagreed with her claims of a bad edit. Now that Marlo has earned her peach on The Real Housewives of Atlanta, she is more than qualified to cast shade on past and current cast members. Marlo is likely not the only one who feels a way about Porsha and Simon. But, she’s the first to issue out some public shade.

Next: RHOA: Marlo Hampton Admits She Didn’t Like Newbie Sanya At First