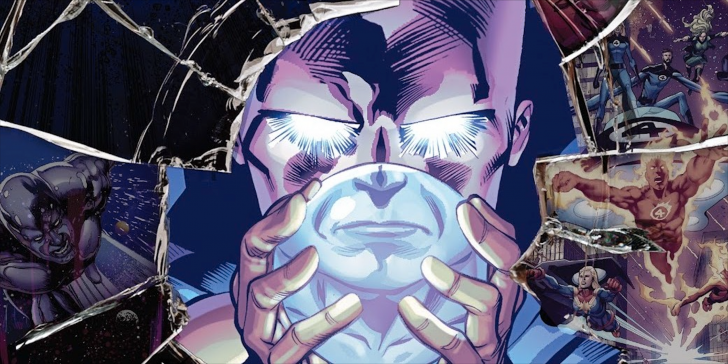 The latest Marvel overstuffed mega-event has the Fantastic Four, the death of the moon, and the Watchers going to war…and that’s only the beginning.

Marvel’s latest Fantastic Four mega-event, the Reckoning War, is one of the busiest comic crossovers in recent memory – and that’s not necessarily a positive development. Writer Dan Slott’s event is an endeavor over 15 years in the making; indeed, clues to the Reckoning War first appeared in 2005. But for all that planning, the event is massively overcomplicated already; Fantastic Four #40 shows just how the event has already lost its way.

In the opening moments of the Reckoning War, Earth’s moon is destroyed by the Badoon, who subsequently invade Earth. As the Fantastic Four team up with Iron Man, Ms. Marvel, Spider-Man and the other Avengers to save New York from the pieces of the moon, Reed Richards believes this event is potentially bigger than anyone on Earth can even fathom. Seeking answers, he travels to the remains of the moon to meet Uatu the Watcher – who appears to have secrets of his own.

At the moon, Reed uses a device to implant the Watcher’s knowledge into his own mind, effectively turning himself into a Watcher. Reed (and the reader) are presented with an overload of information: conflicts are erupting all over the universe, a race called the Reckoning were sealed off by the Watchers from the rest of existence, the Silver Surfer is on a mission of his own to save Eternity from dying (who is one of the grand cosmic forces of the Marvel Universe), the Watchers are going to war – and thanks to the Watcher’s knowledge overloading his human brain, he’ll be dead in three days.

The entire event is itself packed with events, and while the spectacle is impressive, it’s difficult to put a finger on exactly what the event is about; what is the theme, or lesson to be learned? Moreover, once the dust has settled and the Reckoning are finally dealt with, will the Marvel Universe change irrevocably, or will status quo reign supreme once again? The Fantastic Four’s character interactions and family dynamic take a backseat to universe-spanning spectacle, but spectacle alone does not a story make.

The Reckoning War has, in fairness, only just begun; there remains a chance for the story to narrow in scope and focus on characterization. Unfortunately, all signs point to a massive war with the Reckoning species, and the awe-inspiring clash of powers beyond human comprehension threaten to overwhelm the characters at the center of the narrative. The Fantastic Four may travel the universe, but Jack Kirby and Stan Lee’s most famous creations’ best stories always revolved around them – and not the world around them.

Next: Galactus is an Ant Compared to One Classic Marvel Character

Why Benedict Cumberbatch Feels Conflicted About Starring in MCU Movies