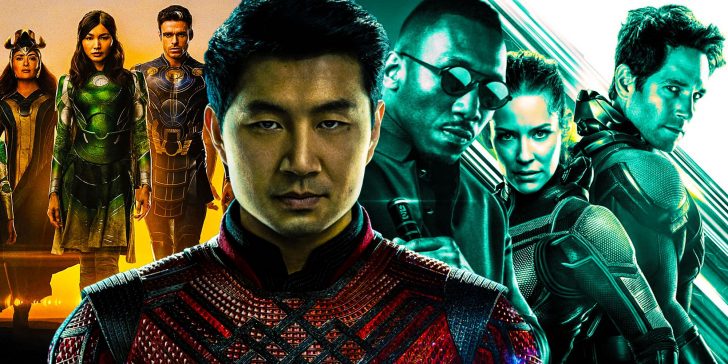 The Marvel Cinematic Universe is currently in its highly anticipated Phase 4, but Phase 5 is already looking more exciting. The MCU has been dominating the superhero genre for years now, becoming the most extensive, popular, and profitable connected universe in the entertainment world, covering not only movies but also TV shows. The MCU kicked off in 2008 with Jon Favreau’s Iron Man, which introduced Robert Downey Jr. as Tony Stark and set the tone for the movies and heroes that followed.

The MCU has now produced over 20 movies and has a couple of projects lined up for the near future, both on the big screen and streaming, with connected stories to continue expanding this universe. Its first three phases are now collectively known as the Infinity Saga, and they were all about Thanos (Josh Brolin) and his quest to acquire all the MCU’s Infinity Stones and the Infinity Gauntlet, all while also introducing the heroes that would lead these three phases and some who would continue after it. The MCU’s Phase 4 is now also covering TV series, which are complementing the movie side of this universe – and yet, the next phase is looking a lot more interesting.

Phase 4 is continuing the stories of the heroes from the previous phases that are still alive and active in their superhero duties and is also introducing new characters that will have a bigger role in the near future – but even with all these movies and TV shows, Phase 4 hasn’t been the most exciting phase, and the upcoming one, even if most of its projects aren’t confirmed yet, is looking a lot more exciting and interesting.

One of the most anticipated upcoming MCU projects is Fantastic Four, as it’s the highly awaited introduction of the team to the MCU. The Fantastic Four’s arrival is now possible thanks to Disney buying Fox, but details about the movie are still unknown, except for Jon Watts (director of all MCU Spider-Man movies so far) serving as director. Next on the list is Blade, a project announced in July 2019 and with Mahershala Ali playing the title character. Blade also counts on Stacy Osei-Kuffour as writer and Bassam Tariq as director, and filming is expected to begin in July 2022.

Another project saved for a future MCU Phase, most likely Phase 5, is Deadpool 3. The Disney/Fox merge also makes it possible for Deadpool to join the MCU, and just like Blade, filming is expected to begin in 2022. Next is a Captain America 4 movie, announced to be in development in April 2021 and with Malcolm Spellnab and Dalan Musson as writers (the former served as head writer on The Falcon and the Winter Soldier and the latter as staff writer). Captain America 4 won’t see Chris Evans return, as it will instead have Sam Wilson (Anthony Mackie) as the title character, and it could be part of the MCU’s Phase 5.

As for rumored projects that could see the light as part of the MCU’s Phase 5, there’s a possible X-Men movie. It has been confirmed that the X-Men will be made part of the MCU at some point, with Kevin Feige announcing a movie about mutants/X-Men is in development, but no more details have been revealed. Another rumored project is a Nova movie, which would tell the origins of the title hero. Nova’s backstory has links to Avengers: Infinity War and Thanos, as Nova is the only surviving member after Thanos destroys the Nova Corps and Xandar in Avengers: Infinity War. On top of that, rumors suggest that Marvel is making a World War Hulk movie, despite issues with Hulk’s movie rights, and Shang-Chi 2 to follow up on the success of the debut of Marvel’s best martial artist. Last but not least, a Thunderbolts movie is also rumored to be in development with production projected to begin in 2023, so it could still make it into the MCU’s Phase 5.

When Will Marvel’s Phase 5 Begin?

It’s still unclear which will be the movie to close the MCU’s Phase 4, and as this universe hasn’t really followed a pattern when it comes to how many movies each phase should have – Phase 1 and 2 had six, and Phase 3 went above and beyond with 11 movies, closing with Spider-Man: Far From Home – it’s hard to pinpoint when this phase will end. However, Marvel has already announced a couple of projects for the near future, and as many of them are still in development, they will most likely be part of the still mysterious Phase 5.

Why Marvel Phase 4 Has Been Disappointing So Far

The MCU’s Phase 4 had one big challenge: carrying on with this universe without Iron Man, Steve Rogers, Natasha Romanoff/Black Widow, and with a completely new storyline that must link a bunch of movies together, as the Infinity Saga did. However, even though Phase 4 has some interesting titles in its schedule (both movies and TV shows), fans have been mostly disappointed by it, and there are different reasons for that. While having TV shows that are finally an active part of this universe (unlike Netflix’s Marvel shows) gave the MCU new chances to tell longer and more detailed stories, viewers haven’t been exactly ok with having to subscribe to yet another streaming platform in order to keep up with the MCU. The problem only grew when Black Widow got a simultaneous release in theaters and Disney+ through Premier Access, further pushing them to get a subscription if they didn’t want to or couldn’t watch it in theaters.

Of course, there has also been disappointment when it comes to the stories and characters in the MCU’s Phase 4. So far, Phase 4 has been a bit more experimental than the previous phases, as seen with WandaVision. On the bright side, it has also been more inclusive, with the introduction of Shang-Chi and the various characters in Eternals, especially the characters of Phastos (Brian Tyree Henry), the first gay superhero in the MCU, and Makkari (Lauren Ridloff), the first Deaf superhero. While these changes have been good (though maybe not all were executed as they should have), fans haven’t been drawn to these new stories, styles, and characters, either because they are not that well known (though the same happened with Guardians of the Galaxy and it was a big hit) or the stories seemed unnecessary, which was a common feeling over Black Widow. It doesn’t help that Phase 4 doesn’t seem to have a clear direction yet, as opposed to the Infinity Saga in which viewers knew it was all leading to Thanos and his quest for the Infinity Stones.

The MCU’s Phase 5 so far is looking quite promising and exciting mostly because it will be introducing well-known characters (of which some fans have been waiting to see in this universe for a long time) and seeing the return of well-known ones. The Fantastic Four haven’t had the best luck on the big screen with the failed attempts of Fantastic Four (2005), Fantastic Four: Rise of the Silver Surfer (2007), and Fantastic Four (2015), so their arrival to the MCU is yet another chance to make things right and finally give them a fun and engaging story that also makes them part of something bigger. Blade is also quite popular among Marvel fans, who are looking forward to seeing Mahershala Ali take on the role that was once played by Wesley Snipes. Deadpool’s MCU debut is also exciting as he’s a completely different character from what this universe is used to, and fans are especially curious to see how his sense of humor and tone will fit in. The X-Men are also some of the characters Marvel fans have been patiently waiting to see in the MCU, and Sam Wilson’s return in a Captain America movie is what he needs after the ending of The Falcon and the Winter Soldier.

Related: MCU Phase 5 Theory: The Beyonder Is The MCU’s Next Thanos (Not Kang)

In addition to that, the other rumored projects – Nova and Thunderbolts – are centered on characters whose presence has already been teased (as is Nova’s case with the appearance of Rhomann Dey) or can be easily set up thanks to past events in the MCU, so there’s already a clear connection with the rest of this universe. The MCU’s Phase 4 still has various movies coming up, so fans’ opinion on it can still change for the better, but for now, it hasn’t been the exciting continuation most were expecting, and hopes are high for the upcoming Phase 5 even if many of its projects haven’t been confirmed yet.

While the MCU’s Phase 4 has come with some let-downs, however, it has also gotten some things completely right. The stories of films like Black Widow and Eternals may have felt muddled or unnecessary, while Shang-Chi as a new hero origin story may have been jarring to audiences used to a pre-existing cast of heroes. However, the other aspects of these projects, such as being female-led, racially and culturally diverse, and more willing to break Marvel’s tried and true formula, are big distinctions that make Phase 4 worthwhile so far. Regardless of what direction Phase 5 takes in terms of its arc and its individual component projects, this kind of work should absolutely continue.

Even within Phase 4’s less boundary-pushing endeavors, like the third Spider-Man movie, Spider-Man: No Way Home, it’s clear that the MCU as a whole is expanding in a refreshing and dynamic direction. Tom Holland’s Spider-Man is already an MCU staple, as is Doctor Strange, who accompanies him in Spider-Man: No Way Home. However, Peter Parker’s story takes a decidedly serious turn in No Way Home, as he’s left with no living family, no friends, and an entirely different future than he ever imagined. While this is not the first time the MCU has dealt heavy emotional blows to its heroes, it does feel like a shift away from the happy-ending formula many Marvel movies employ, illustrating Marvel Phase 4’s darker, more nuanced, and more mature tone. There’s lots of potential for other Phase 4 projects to follow this precedent as well, specifically the dark upcoming MCU show, Moon Knight. Of course, comic book properties like the Marvel Cinematic Universe need to find the right balance between levity and darkness, but the fact that Phase 4 is leaning a bit further into the latter than previous phases is a good sign, and will hopefully extend into Phase 5 as well.

Next: What MCU’s 4 New Movies Reveal About Phase 5 & Marvel’s Future