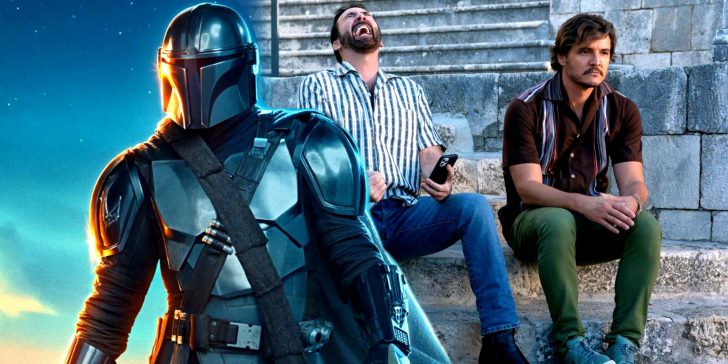 A clip from The Unbearable Weight of Massive Talent puts the Mandalorian’s helmet over Pedro Pascal’s character in a scene with Nicolas Cage.

A clip from Nicolas Cage’s newest film The Unbearable Weight of Massive Talent puts Pedro Pascal’s Mandalorian into the movie. Massive Talent features Cage playing himself as he accepts a paid invitation to attend billionaire super-fan Javi Gutierrez’s (Pascal) birthday party. When Cage is told by the CIA that Javi is actually a drug lord and gets recruited to take him down, Javi’s and Nick’s bromance is put to the test in this heartfelt comedy. The Unbearable Weight of Massive Talent is currently sitting at a solid 97% on Rotten Tomatoes as it starts to prepare for its premiere week.

One aspect of this film that has been highly praised thus far is Pascal’s performance as Javi. The actor experienced a massive wave of success following his breakout role in HBO’s Game of Thrones as Oberyn Martell and more recently as Din Djarin on The Mandalorian. Pascal debuted as the beskar-clad warrior in 2019 the day Disney+ first launched in the United States and has gone on to become a beloved character amongst audiences. In an interview promoting Massive Talent, Pascal even said that Cage would make a great Mandalorian when asked which role of his Cage would be best in.

Now, the official social media account for the movie, Massive Talent, has shared a video that features Pascal’s Mandalorian. The beskar helmet is photoshopped over Javi’s face in a scene from the movie where Javi and Nick go back-and-forth, torn over what separates them and their bromance. Nick’s use of “you” is dubbed over with “the Mandalorian” to match Pascal’s helmeted appearance, though the beskar comes off when Javi expresses his admiration for Nick. The tweet even jokes about Nick now being in the Star Wars universe. See the comical clip below:

The fun Unbearable Weight of Massive Talent clip is a perfect way of drawing upon what is arguably Pascal’s most popular role to date to help promote the film and draw in more of the Star Wars audience. Despite the love Lionsgate and interviewers have shown towards Din and Pascal’s Star Wars involvement, the actor has remained very tight-lipped about anything related to The Mandalorian’s upcoming season. In one interview, he insisted he wasn’t going to reveal anything when prompted about The Mandalorian season 3, though he did on one occasion reveal that there will be many “new faces” in the next chapter of Din’s adventure.

As for Pascal’s next adventure, The Unbearable Weight of Massive Talent is just under a week away for audiences. The film has been described as a love letter to Cage’s filmography, something that was easy for Pascal to pull off with his own lifelong admiration for his co-star. The Unbearable Weight of Massive Talent’s extremely positive reception thus far has Cage glad that he didn’t ultimately decide to reject the film, as he did so multiple times before finally accepting. All is well that ends well, especially since it gave Cage the opportunity to work with the Mandalorian – that is, with Pascal.

Next: Mandalorian Season 3 Has To Avoid Fixing The Sequel Trilogy Too Much