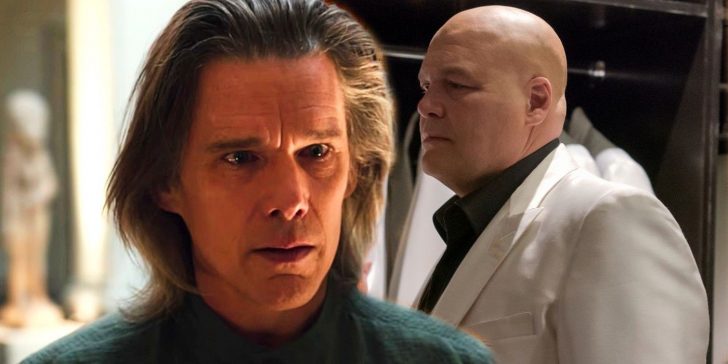 Vincent D’Onofrio, who plays Wilson Fisk/Kingpin in the Marvel Cinematic Universe, praises Ethan Hawke’s Moon Knight villain, Arthur Harrow. D’Onofrio made his indelible debut as Kingpin on Daredevil, which ran for three seasons from 2015 to 2018. Among Jessica Jones, Luke Cage, Ironfist, The Punisher, and The Defenders, Daredevil reigned supreme thanks in no small part to D’Onofrio’s Kingpin. Following Netflix/ABC’s cancellation of its Marvel TV proprieties in 2019, the Defenders Saga has since found its way to Disney+.

D’Onofrio recently took to Twitter to share how much he’s enjoying Moon Knight. The Kingpin actor’s post praised “his pal” Hawke in the series as well as Isaac and Calamawy. Check it out below:

D’Onofrio’s villainous seal of approval is as good as it gets. Along with Charlie Cox’s Daredevil, D’Onofrio’s beloved portrayal of Kingpin has been at the center of conversation concerning Netflix’s shows becoming MCU canon. Proving himself too inimitable to recast, D’Onofrio made his official MCU debut in last year’s Hawkeye right before Cox appeared in Spider-Man: No Way Home. Last month, the Defenders Saga and Agents of SHIELD became available to stream on Disney+ alongside Moon Knight.

While it remains to be seen if Harrow will survive the events of Moon Knight, it seems safe to say that Kingpin will return in an upcoming Disney+ series. In Hawkeye’s sixth episode, Maya Lopez/Echo (Alaqua Cox) shoots and seemingly kills Kingpin as the camera cuts away. In the comics, Kingpin survives a similar encounter while being blinded. That said, both he and Daredevil have connections to Echo—who is set to lead her own spinoff series. While fans anticipate seeing D’Onofrio and Cox across from each other once again, they can enjoy the equally talented combo of Isaac and Hawke in Moon Knight, with new episodes dropping every Wednesday for the next four weeks on Disney+.