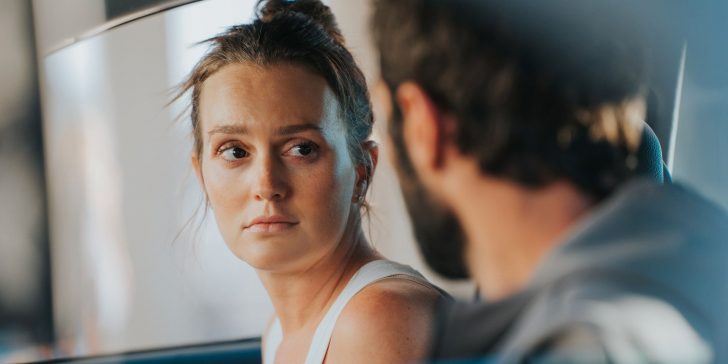 Though Meester puts on a solid performance atop an intriguing plot, ﻿The Weekend Away ﻿doesn’t supply enough thrills to make it an entertaining watch.

With Netflix’s The Weekend Away, Leighton Meester finds herself in a situation familiar to many cinematic heroes. A psychological thriller in the vein of Gone Girl or The Girl on the Train, The Weekend Away holds all the elements of a classic missing-persons mystery. Unfortunately, the film, which is based on the novel of the same name by Sarah Alderson (also the writer of the script here), lacks the same thrills and suspense that have pushed so many others in this genre to great heights. Director Kim Farrant finds moments of cleverness, but also takes too much time to up the stakes. Though Meester puts on a solid performance atop an intriguing plot, The Weekend Away doesn’t supply enough thrills to make it an entertaining watch.

New mother Beth (Meester) has been pulled away from her daughter and unhappy marriage in London to indulge in a fun-filled weekend in Croatia with her best friend Kate (Christina Wolfe). Her first night there, Beth is hoping for a nice dinner and to turn in early, but Kate swiftly pulls her into a wild night out… which proves to be a fatal decision. Beth wakes the next morning to find Kate missing, and despite her best efforts, no one seems to believe that something awful happened. Armed with only a taxi driver named Zain (Ziad Bakri) as an ally, Beth sets out to uncover just what happened to her friend.

Christina Wolfe and Leighton Meester in The Weekend Away

The Weekend Away doesn’t waste much time in getting to Kate’s disappearance; by the 15-minute mark, she’s gone and Beth is worried. One would then expect Farrant to dive right into this confounding mystery, but The Weekend Away instead takes a slower approach. The pacing is uneven, with a more restrained start that later gives way to rapid-fire twists. Beth gradually pieces together some details of the night before — which she can’t recall, much to her frustration — but the first steps forward in her investigation only come about because she has Zain to help her. For the first portion of The Weekend Away, Beth is more of a passive bystander. It’s only later on in the action that she brings out some clever moves of her own, including one that’s a sly callback to an early moment. Beth could be a compelling character, a woman desperate to find her friend in an inhospitable environment. Overall, though, Alderson’s script doesn’t give Meester much else to do besides cry and fret.

Of course, anyone who has seen Meester’s previous work will know she has the range for a number of characters. The Weekend Away’s Beth is a far cry from the performance Meester is best known for — Blair Waldorf on Gossip Girl — and yet the actress has no problem sinking into her meeker persona. Because of how quickly Kate’s disappearance comes about, it’s hard to get a proper reading on her friendship with Beth. However, thanks to Meester, that connection is felt through Beth’s desperation to find Kate. Meester lets the audience feel Beth’s pain, particularly when a twist nearly midway through takes The Weekend Away in a new direction. The rest of the cast is solid, with Bakri perhaps making the biggest impression as the surprisingly helpful Zain.

Ziad Bakri and Leighton Meester in The Weekend Away

With a movie like The Weekend Away, bringing something new to the format is incredibly difficult. There have already been countless other movies with the same sort of premise, so all it really takes is a compelling mystery, a good amount of suspense, and a devastating twist to win over audiences. Unfortunately, The Weekend Away doesn’t have nearly enough of the second part, thus hindering everything else. The most suspenseful sequence finds Beth uncovering something about her creepy landlord (Adrian Pezdiric), but the rest of the mystery lacks that same propulsion. This connects back to the shaky pacing, which results in the biggest twist coming with just 15 minutes left in the film. To be fair, said ending is pretty intriguing and fills in gaps viewers might not have realized were there.

Still, The Weekend Away’s solid ending isn’t quite enough to make up for the underwhelming journey. There are far more compelling psychological thrillers out there these days, and this one comes across as a merely average effort. Meester is a reason to watch, so fans of her work might find something here. All told, though, The Weekend Away is a missing-persons adventure that isn’t as gripping as it could’ve been.

More: Watch The Weekend Away Trailer

The Weekend Away is now streaming on Netflix. It is 91 minutes long and rated TV-14 for language, violence, and suggestive dialogue.