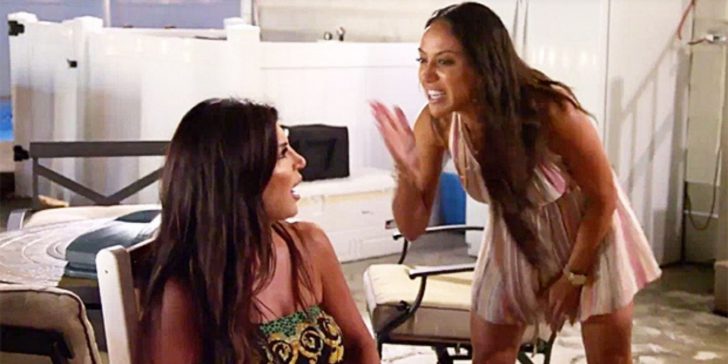 Real Housewives of New Jersey star Melissa Gorga says she hasn’t spoken to her sister-in-law Teresa Giudice since filming the season 12 reunion. The Bravo-verse primarily received a crash course in Teresa and Melissa’s tense dynamic when the latter and her husband Joe Gorga entered the RHONJ fold in season 3. Things escalated between the families during a christening hosted by Melissa and Joe. What started as an argument between Teresa and Joe turned into an all-out family brawl.

Nine seasons later and Melissa and Teresa seem to have finally reached a tolerable place, getting into minimal bouts in recent years. The duo even went away together on Bravo’s inaugural all-stars venture The Real Housewives Ultimate Girls’ Trip. While they may be working hard to get along for their family’s sake, it’s clear that tension still bubbles under the surface, especially when it comes to the other’s respective friendships. Margaret Josephs became enemy number one for Teresa during season 12, and yet she’s one of Melissa’s best friends. While Melissa’s been able to ride the fence, as the season draws to a close, audiences wonder if she will be forced to choose sides at the reunion.

During an appearance on Watch What Happens Live, Melissa revealed to Bravo king Andy Cohen that she hasn’t spoken to Teresa since the reunion wrapped. Putting the TV personality back in the middle of her friend and sister-in-law, Andy led Melissa in a new shady game entitled “Who will it be, Marge or Tre?” He asked her if she’s spoken to Teresa since the reunion, to which she coyly replied, “no.” Check out the full exchange below:

The shade grew as Melissa went on comparing the frenemies. She added that Margaret is more loyal to her and Teresa has a harder time being accountable for her actions overall. Melissa’s comments came after episode 12 of the series aired, showcasing the aftermath of Teresa’s violent outburst in Nashville where she pushed an entire table of drinks and silverware across the table onto Margaret. Melissa expounded on how awful her position is, saying that if she agrees with Margaret, Teresa will be mad, but if she does the reverse then Margaret won’t look at her the same.

Melissa has been caught between a rock and a hard place since making her housewives debut. Teresa tends to be at the center of conflict more often than her, constantly pressuring her family to stick up for her even when her actions are deplorable. Though the blood is thicker than water adage is one of Jersey franchise’s greatest appeals, it seems nine seasons of Teresa’s drama has taken a toll on Melissa and the family first rule won’t necessarily always fly. Viewers will have to wait and see why the pair aren’t currently speaking when the RHONJ season 12 reunion airs. It wouldn’t be a reach to say that Margaret or Teresa’s good friend and Melissa’s adversary Jennifer Adyin have something to do with it.

Robert Peterpaul is a Movie/TV News Writer for Screen Rant. He’s currently the host of The Art of Kindness podcast, which aims to showcase celebrities using their platform to make the world better. Peterpaul has been a professional Writer/ Editor for over eight years, writing for high-profile publications like HuffPost, Backstage and HOLA! USA, where he served as the Weekend Editor for six years. Robert has also worked on various television shows and films, including: NBC’s “America’s Got Talent” and “Access Hollywood.” When he’s not writing about entertainment, he’s entertaining. Robert has appeared in films like James Franco’s “King Cobra,” TV series such as Amazon Prime’s “New Dogs, Old Tricks,” and ad campaigns for brands like T-Mobile. He also has a long-running career in the theatre, getting his start Off-Broadway when he was child. Speaking of childhood, Robert’s second home growing up was blockbuster, where he rented “The Goonies” more times than any customer (always with a side of Sour Patch Kids, of course). His undying passion for entertainment and storytelling continues to thrive. He thanks you for reading and hopes you follow your bliss. You can follow him on Instagram/Twitter @robpeterpaul and at www.robertpeterpaul.com.