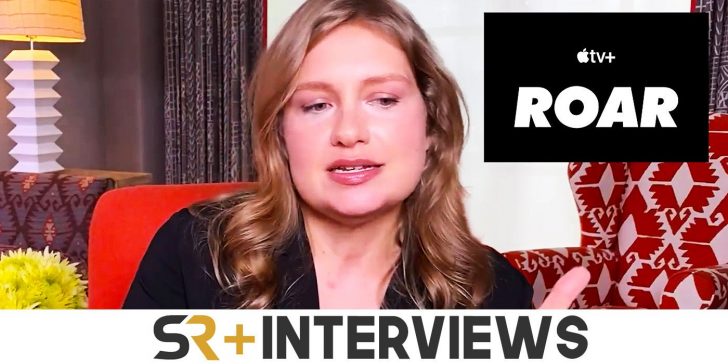 Roar star Merritt Wever chats about her episode, “The Woman Who Was Fed By A Duck,” and her bond with the creators of Apple TV+’s new anthology.

Roar, Apple TV+’s new feminist anthology series from GLOW creators Liz Flahive and Carly Mensch, arrives on the streaming service April 15 with eight individual episodes that stand alone but tie together thematically. Each darkly comic fable, many based on short stories from Cecelia Ahern’s Roar collection, explores how one ordinary woman navigates her extraordinary circumstances. Of course, said circumstances may shift genres from magic realism to science fiction depending on the story in question.

The fifth episode of Roar, titled “The Woman Who Was Fed By A Duck,” stars Merritt Wever (Marriage Story) as Elisa, a single woman whose frustration with the modern dating scene leads her to form a curious friendship with a duck (voiced by Justin Kirk, Molly’s Game). Thankfully, he seems like anything but a typical toxic man… at first. Costarring in the thirty minute segment is Riki Lindhome (the upcoming Wednesday) as Elisa’s sister Lili, whose love for her sibling doesn’t always make her understanding.

Merritt spoke to Screen Rant about her professional experience and personal friendship with Roar’s creators, her impressive duck co-lead, and her thoughts on the original short stories themselves.

You’ve previously collaborated with Liz and Carly on Nurse Jackie. Was that part of the reason you were drawn to Roar?

Merritt Wever: Yes, that is how they knew me. That’s how I knew them. And I was very lucky in that they came to me and said, “Do you want to come be a part of this new thing we’re doing?” I loved GLOW, so I was very excited – not just to see and work with my friends again, but be a part of the next creative chapter of their lives.

It was also Liz’s first time directing. It made me really happy to see my friend do something for the first time and not only be very good at it, but see that it made her very happy. That was a very special thing to get to witness.

Speaking of doing things for the first time, I don’t think many people have had to act opposite a duck. What was that experience like, and what are you actually acting opposite?

Merritt Wever: I’m acting opposite a real live duck. We didn’t really know how it would go on the day; if I would be working with a piece of tape and we’d be cheating it all the time, or grabbing a couple of lines of us in the same shot before it waddled away. I certainly anticipated that would be the biggest hurdle of the episode.

And, for some reason, this duck was absolutely magical and wonderful. It was actually really helpful to be talking to this live creature; this being that was looking at me, listening to my voice, moving its body and responding to me and the way that I spoke. Having an animal that I didn’t know, second to second and moment to moment, if it was gonna waddle away or start squawking kept things very alive.

I also really loved the sisterly bond between Elisa and Lili. Was was it like to develop that sisterly bond and work alongside Riki?

Merritt Wever: Riki is wonderful. I saw her in a show she did at the Upright Citizens Brigade many years ago, so it was very exciting to get to work with her.

I know that we’re talking about the duck a lot, but I think it’s really important. I think one of my favorite moments of the episode is where she gets to tell her sister, “I know you want me to be happy. But the things that make you happy are not going to be the things that make me happy.” We want different things, and that’s going to have to be okay.

Had you read the other stories from Roar beforehand, either for context or for pleasure?

Merritt Wever: For both. I read them for both.

Not all of the episodes in the series started or originated as stories, but I did take a look at the ones that were in the book just to get an idea of [them]. I’d read my script and knew how strange or odd or unique my story was. There is a desire to be like, “Wait, what are we all doing? And we’re all doing it?”

Roar offers an insightful, poignant, and sometimes hilarious portrait of what it means to be a woman today. Featuring a unique blend of magical realism, familiar domestic and professional scenarios, and futuristic worlds, these eight stories mirror the dilemmas of ordinary women in accessible yet surprising ways. How they emerge from their respective journeys speaks to the resiliency that exists within themselves, and with all women.

All eight episodes of Roar premiere April 15 on Apple TV+.