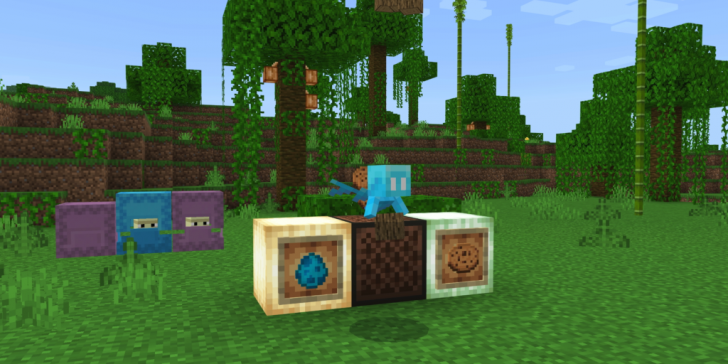 A wise Minecraft player once said “you can never have enough inventory space.” That Minecraft player was me. For those of us who don’t have an inventory full of shulker boxes, the newest mob coming to the game somewhat solves that issue. After winning a vote held during Minecon 2021, Mojang is preparing to add the Allay to the game, with the mob currently appearing in the game’s latest beta. While the Allay will officially be added to Minecraft with the game’s 1.19 update, “The Wild,” we’ve been able to dig into its mechanics already. Here’s how the Allay works in Minecraft, and how you can have this friendly mob work for you.

Whenever it arrives, Minecraft’s Wild update will add Allays to the game officially, along with a ton of other new content. Two new biomes will be added to the game, namely the Mangrove Swamp and Deep Dark. The former is filled with mud, large Mangrove trees, and two new mobs, Frogs and Fireflies.

Inside of Deep Dark biomes, you can find Ancient Cities, a new set of generated structures much like the Nether’s Fortresses. These areas are filled with a new type of block, called Sculk, as well as one of Minecraft’s most frightening enemies, Wardens. Fitting its name, Deep Dark biomes only spawn far underground, between Y= -1 and Y= -64.

Where Can Allays Be Found?

As an entirely new mob, don’t feel bad if you can’t find an Allay easily. They don’t spawn in Minecraft’s open world the same way mobs like sheep or pigs do. Instead Allays can only be found in two specific structures: Pillager Outposts and Woodland Mansions.

Since they spawn much more frequently, in any biome that regular villages can spawn in, Pillager Outposts are your best bet for finding Allays. Pillager Outposts are small towers, marked by Pillager banners. You know you’ve found one when the grey enemies start shooting crossbows at you. While Pillager Outposts have their own loot to find, cages will sometimes spawn right next to them, either with an Iron Golem or up to three Allays inside.

Woodland Mansions on the other hand are incredibly rare. These structures only spawn in Dark Forest biomes, and are packed with tons of monsters and enemies, including Vindicators and Evokers, a pair of threatening Pillager types. Allays have a chance to spawn inside the sprawling structure’s prison room.

Before you go hunting for Allays in either of these locations, you’ll absolutely need some decent gear. Check out our guides for finding diamond ore here or iron ore here, and collect some of those for weapons and armor before trying to rescue them. How Do Allays Work?

While Allays have been shown off as extremely helpful mobs, they’re a bit of a hassle to get working for you. You can’t exactly “tame” these mobs, but instead have to give it an item. Once the mob has an item in its hands, it will follow you around and collect other similar items. Handing one an oak plank block, for instance, will make it pick up any other planks around the player.

However, Allays aren’t moving backpacks that players can leave items with. When an Allay fills up its inventory or picks up every item it can see, it will then try to give those items to you by throwing them all over the place. If you want it to pick up a different item, you just have to right-click on it with an empty hand to take whatever it has and then give it a different item.

The only way to get an Allays to drop items off at a specific location is with note blocks. Playing a note block around one will mark that location for the mob to drop items off at for 30 seconds. I found that by creating a simple redstone loop that constantly played a note block every few seconds, the Allay always recognizes that spot as a drop-off location when it is nearby. Putting a chest with hoppers connected to it from every side on top of the block creates an extremely rudimentary system that automatically stores specific items. You can find a picture of that setup above.