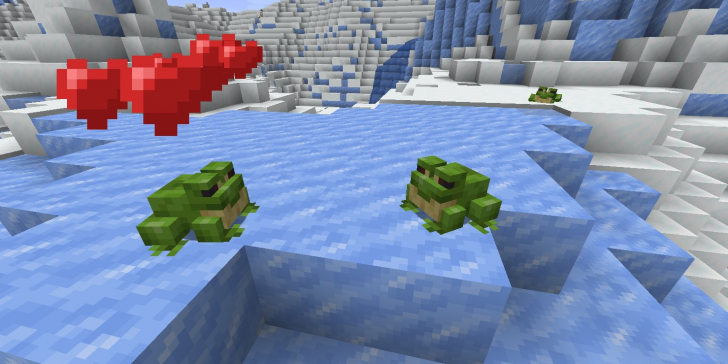 Every mob in Minecraft exists to provide you with something. Passive mobs like Chickens, Pigs, and Cows give you food while aggressive mobs dole out XP, resources, and sometimes a good old fashioned scare. Regardless of what they do though, mobs are mainly there to add another layer to the Minecraft experience. As silly as it may sound, the Frogs being added to the game in its 1.19 Wild update will help accomplish that as well. While they certainly won’t be necessary for survival, having some Frogs around your base will let you produce some new, rare blocks being added to the game. Here’s how you can get Frogs in Minecraft and what you can do with them.

Where Can Frogs Be Found in Minecraft?

When they’re finally added to the game, Frogs won’t exactly be hard to come across while you’re strolling through the overworld. They spawn in both Swamps and Mangrove Swamps, likely in the same way that Pigs or Cows spawn. Swamps themselves aren’t rare biomes to come across either, spawning with more regularity than Ice Spike or Mushroom Field biomes.

How do Frogs Work in Minecraft?

Like many other mobs found throughout Minecraft, Frogs start their lives as babies, though they aren’t just smaller versions of Frogs in the same way baby Cows are just, well, little Cows. Like they do in the real world, Frogs start their lives as Tadpoles, small wriggly creatures that can only live in the water. Unlike other Mobs though, Tadpoles spawn from their own block, called Frogspawn, that sits on top of water like a lily pad.

Depending on what kind of environment a tadpole reaches adulthood in, one of three frog variants will spawn. Temperate biomes, like Swamps, will spawn orange Frogs, while cold biomes spawn green Frogs, and warm biomes spawn white Frogs. These variants aren’t just visually different, as they also give you access to one of three new blocks coming in Minecraft’s 1.19 update.

Whenever it arrives, Minecraft’s Wild update will add Frogs to the game officially, along with a ton of other new content. A new biome, the Mangrove Swamp will also be added, with Swamps being overhauled as a whole. The Wild update will fill them with mud and Mangrove trees, as well as Frogs and another new mob, Fireflies.

Outside of the swamps, you’ll be able to find two more new mobs in Minecraft after its 1.19 Wild update drops. The first, Allays, can be found either in Woodland Mansions or as prisoners in Pillager Outposts. Once freed and given an item, these helpful sprites will follow you around, picking up any more of that item that it sees until it has a full stack. Wardens on the other hand are terrifying new mobs that make their homes in Ancient Cities, a set of generated structures only found in the Deep Dark.