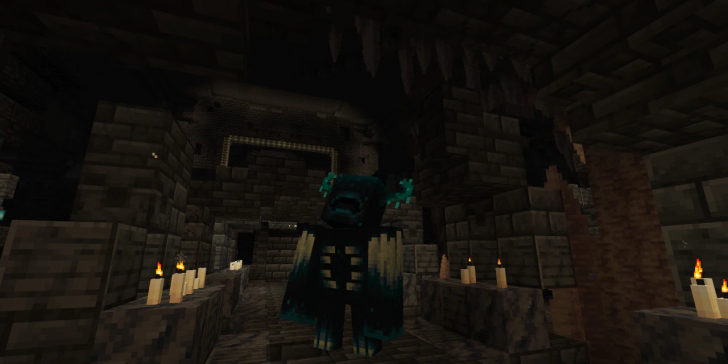 After getting a full set of diamond armor and mastering the Nether, you may feel like you’re ready to tackle the worst that Minecraft has to offer. However, along with the Ender Dragon and the Elder Guardian, the game has one extra mini-boss for you to fight against: wardens. While they’re set to be added to the game in its upcoming Wild update, these terrifying mobs were present in one of the game’s past snapshot builds, giving us plenty of time to figure out how it works. Here’s how the Warden works in Minecraft, and how you can easily take it on.

Where Can Wardens Be Found?

Chances are, you aren’t going to stumble upon a Warden by accident. These frightening mobs only spawn in the Deep Dark, a brand new biome being added in Minecraft’s Wild update. The biomes themselves are somewhat uncommon, generating randomly below Y=0. To check if you’ve come across one of these, simply look out for Sculk, a dark blue block flecked with lighter blue spots. If you’ve come across these blocks underground, you’re officially in the Deep Dark.

Wardens don’t just wander around this biome like zombies or skeletons do, however. Instead, they only spawn when certain conditions are met. First, a Sculk Shrieker has to be activated three or more times, which can be accomplished by simply walking past it repeatedly. The light level around the player also has to be less than 11. If both of these conditions are met, a Warden will spawn somewhere near the activated Sculk Shrieker.

How to Beat Wardens

If you do find a Warden, the best advice I can give you is not to fight it at all. Besides being scary, these mobs are incredibly strong. The boss has so much attack power that they can even kill a player wearing a full set of unenchanted netherite armor on hard mode. In Minecraft’s normal difficulty, they can easily overpower a player with enchanted diamond armor. And because they have a whopping 500 health, Wardens won’t go down before you do in a one-on-one fight.

The best way to approach a Warden is to keep it at a distance since they can’t see and can only hear when you’re nearby. While they’re fast, they can’t climb, so build a small tower and slowly whittle them down with a bow and arrow. If you’re dead set on fighting one, make sure you have the Smite and Knockback enchantments. Like zombies and skeletons, Wardens are undead mobs, meaning Smite will deal extra damage to them. Knockback is simply there to make sure the massive enemy can’t run straight up to you after a single hit.

Whenever it arrives, Minecraft’s Wild update will add Wardens to the game officially, along with a ton of other new content. Two new biomes will be added to the game, namely the mangrove swamp and Deep Dark. The former is filled with mud, large mangrove trees, and two new mobs, frogs and fireflies.

Inside of Deep Dark biomes, you can find ancient cities, a new set of generated structures much like the Nether’s fortresses. Allays, a helpful new mob, will also be added to the game. Only spawning inside of woodland mansions or pillager outposts, these creatures can be used to carry around items, and can even automatically deposit items in chests with the right set up.