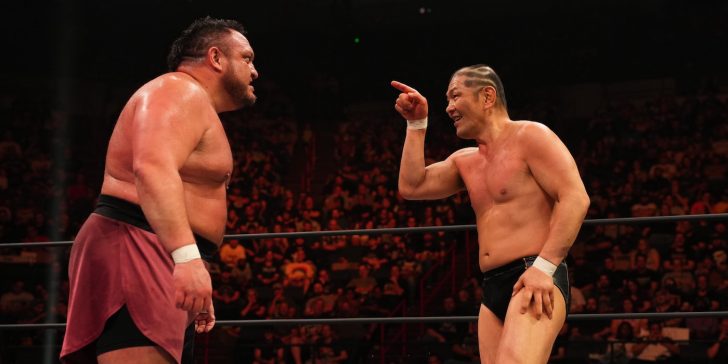 Minoru Suzuki and Samoa Joe wrestled for the Ring of Honor Television Championship in the main event of Dynamite last week. It was fine.

When I say “it was fine,” I don’t mean it dismissively. Both Joe and Suzuki are presence guys at this point, and that meant that the high points of the match were the ones where the two of them were slapping each other as hard as they could while making faces at each other. This kind of wrestling, while brutal, accomplishes two things: it let Suzuki go out like a warrior as a transitional champion, and it got both men through a 15-minute bout with a minimum of bumps. If at the end of the match you found yourself thinking “holy shit, those old dudes looked good,” the match achieved its mission.

I think the match achieved its mission. I think it was fine.

Unlike other marquee Minoru Suzuki matches in AEW, Suzuki vs. Joe wasn’t really positioned as a special moment, despite the unhinged dream match nature of it. Suzuki’s most notable AEW match, against Bryan Danielson, was a last minute affair that justified a YouTube pre-show to an episode of Rampage that featured CM Punk vs. Matt Sydal and the Inner Circle against American Top Team. Despite its placement on YouTube (something a lot of wrestling fans harped on in October), it didn’t just feel like the main event of the show — it felt like one of the biggest things that had ever happened in AEW’s history.

Suzuki/Joe, dream match or not, was just a main event, just another match in service to the ongoing narrative of All Elite Wrestling.

Discounting how nonplussed I am by that ongoing narrative, I think that’s fine. Minoru Suzuki is, at this point, a semi-regular attraction in AEW, a man who isn’t necessarily hurt by losses on their stage because his reputation and presence are protection enough. The ROH Television Championship isn’t hurt by hotshotting it to Joe because you’d have to be a real sicko to care about the ROH Television Championship. And, finally, Samoa Joe gets to move onwards in his feud against Jay Lethal and Sonjay Dutt with a title around his waist, perhaps adding something for the portion of the audience who didn’t bite when their issue was a stock teacher/student grudge.

In short, this is what a dream match looks like outside of its little bubble.

In this sense, Suzuki/Joe is a microcosm of what makes AEW as good as it is — unlike bookers like Vince McMahon and Eric Bischoff, Tony Khan understands that what makes wrestling fans excited isn’t the “wait and see” nature of booking a program out for three or four months of rematches, or obfuscating an angle with so much detritus that there’s never a satisfying conclusion, just more bullshit to try to keep score of. Most of AEW’s finishes are decided in the ring, done in such a manner that the story moves forward either because a babyface was cheated or a heel won’t accept defeat. There aren’t many disqualification or countout victories, and there haven’t been many marquee rematches — the recent Young Bucks/FTR bout happened two years after their first encounter, and Punk/MJF, Page/Danielson, and Rhodes/Guevara had obvious reasons for an encore.

I would be surprised if Minoru Suzuki and Samoa Joe wrestle again in AEW. Suzuki’s function as a semi-regular visitor is to bring something unique to the table, and there were no extenuating circumstances between he and Joe to begin with. He’s a transitional champion in the most traditional sense of the term — think Bob Backlund beating Bret Hart and losing to Diesel, but more respectfully done. The goal of this match is not to leave the fans wanting more, but to leave the fans satisfied with what they got.

To that end, Joe and Suzuki delivered. What you want out of Samoa Joe and Minoru Suzuki are similar: stiff strikes, mean looking submissions, and a high impact finish. There are fewer than five bumps in less than 12 minutes of action, but you get everything you expect: multiple chop battles, Suzuki’s usual, semi-pointless but nevertheless fun arm work, some submissions out of Joe so you don’t forget that he’s the Samoan Submission Machine, and a hard-fought muscle buster for the win. It is the prototypical Minoru Suzuki United States Tour match, and it’s still a lot of fun to watch.

It probably would have been better inside its bubble, but Samoa Joe is new here, he has beef with someone, and that’s ultimately more important than the image of him shaking Suzuki’s hand. You know, if you value the Samoa Joe/Jay Lethal beef. If you’re a sicko.

It isn’t every Wednesday that AEW is allowed to carve out a couple extra minutes from Young Sheldon, so there was speculation that either Joe/Suzuki was going to go long (15 minutes being fairly long for them) or that something important was going to happen.

When cameras caught a glimpse of Lethal and Dutt in the crowd, I knew it would be neither.

Jay Lethal is decidedly not for me.  He’s a good wrestler, but I have lived through an era of wrestling where there are so many Good Wrestlers that people suddenly agree with me that Lex Luger was an amazing wrestler. Being a Good Wrestler is not enough to make someone a good wrestler. I’m not much for his promos, I’m not into whimsy enough to enjoy his Randy Savage or Ric Flair impersonations as a wrestling character, and I missed out on so much of his run at the top of Ring of Honor that he registered to me as “just a guy” upon his surprise AEW debut. Add that to his being named during the #SpeakingOut movement (allegations which he has responded to, though to no clear resolution), and I just don’t want to see him.

Which is too bad for, because I want to see Samoa Joe.

Which is where him wrestling Suzuki or Max Caster or whoever’s next comes into play. Samoa Joe is being asked to carry some dumb shit right out of the gate, a Lethal/Dutt/Satnam Singh triad which, along with Tully Blanchard Enterprises, suggests that Tony Khan will be using Ring of Honor to scratch an itch for the kind of 70s/80s stable hokum that has had its place in the ROH of the past, but clashes with the slicker-if-frequently-derivative blend of 80s/90s American stables and Japanese factions Khan favors. It felt decidedly out of place on Dynamite, even if I’m a sucker for Tall Men who employ the Vice Grip.

None of that is Minoru Suzuki’s concern. He lost the match, left the ring, and went backstage while Lethal and Dutt gave Samoa Joe the gift of a middle finger. Every loss he takes in AEW is a means of hitting the reset button. Nothing hurts him. He just goes away for awhile, comes back, and wrestles whoever he needs to wrestle. What happens after that is someone else’s problem. Right now, that problem is Samoa Joe’s. Welcome back to Wednesday nights, pal.