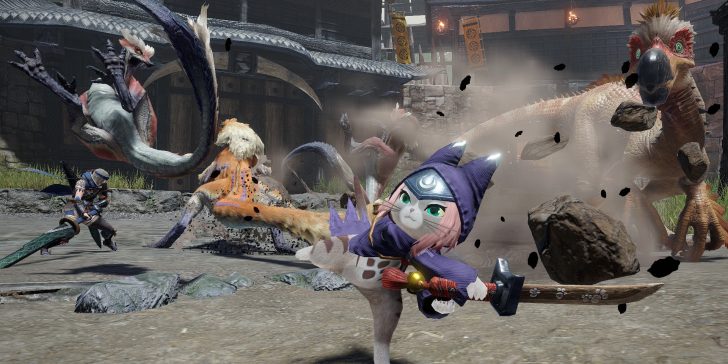 The Monster Hunter Rise “Bird Wyverns of Ruin?” event quest shouldn’t pose a serious challenge to experienced hunters. But it’s nice to know of a mission is worth your time — considering things like rewards and the amount of time you need to invest. That’s where this guide comes in! We’re going to run down the basics of this hunt based around (you guessed it) bird wyverns. It’s not the toughest mission in the game by any stretch, but it will net you a unique piece of Layered Armor for your Palico! One that makes them take on the appearance of Tsukino from Monster Hunter Stories 2.

If you don’t know who Tuskino is, well, at least it’s a unique costume for your felyne friend! Either way, you’ll be heading to the Arena. That’s good news: It cuts down on travel time as you search for your prey. In this case, that’s one Great Izuchi, one Great Baggi, and finally a Kulu-Ya-Ku. All of which are naturally Low Rank (as this is a Low Rank event quest). Fighting in the Arena also means you don’t need to collect Spiribirds. Just make sure to snag the one, big, rainbow Spiribird on the right-hand side of the entrance to the fight. This will fill your Petalace stats (i.e. health, stamina, damage, and defense) to their maximums. Last but not least, you can always speed up the mission that much more by playing multiplayer. Just send or respond to a Join Request in the Gathering Hub.

With those most basic of basics out of the way, let’s talk tactics. You don’t really… need many. It’s a Great Izuchi and a Great Baggi. The Kulu-Ya-Ku spawns later — instantly after you down the other two monsters. It’s not exactly a trio of devastation (hence the cheeky question mark in the event quest title). But hey, at least this MH Rise event quest features music from Monster Hunter Stories 2 as a nice extra touch! Of these three beasts, only one has a unique status effect to worry about: Great Baggi. It can fire a puff of sleeping gas in an arc. Staying near the blue creature is one of the best ways to avoid the gas. If you do get hit, you’ll slowly start to fall asleep, which leads to extra damage if you get hit before waking. This can be counteracted with an Energy Drink. Given the low damage of the monsters involved, though, you should be fine either way. Energy Drinks take a while to consume without Speed Eating. If you’re in High Rank and able to slot these abilities into your armor, your gear is probably better than it needs to be already. If you’re playing in Low Rank, you should have access to the “catch-up” Guild Cross armor, which is also plenty strong.

On the bright side, the knockout gas affects both players and monsters. You can easily let the Great Izuchi and/or its tiny cohorts, the regular Izuchi, go to sleep. Then lure the Great Baggi to another part of the map to fight it solo. Unless you’re having trouble dealing with them both at once, though, it’s probably faster to keep them together. The birdbrains will damage one another as they swipe at you. Not to mention you can Wyvern Ride one into the other for bonus damage and material drops.

Damage is a more important factor for such a simple fight. Water damage is the most effective element spread across all three monsters, so pack that if you can. You want to clear the quest as quickly as possible. That’s because you won’t necessarily get all the items you need in one go! You’re specifically looking for a crafting material called a “Disguise Device.” Of which you need four to complete the two-piece Layered Armor set. Granted, the Tsukino Costume is an all-or-nothing affair, so you need to craft and wear them at the same time. That means you need all four Disguise Devices in your MH Rise save. No going splitsies.

Once Kulu-Ya-Ku is out in the open, you’re basically in the clear. This comical foe doesn’t bring much to the table that you don’t already know how to deal with. Just note that, if you didn’t already know, it’s difficult to attack with melee weapons from the front when holding a rock. The skill Mind’s Eye will also sail right through the rock anyway — saving you even more time. Some weapons, like the Hunting Horn, provide buffs and attacks with “natural Mind’s Eye,” negating the need for the skill.

Once you complete “Bird Wyverns of Ruin?” and acquire every Disguise Device necessary, hit up a Buddy Smithy. They’ll make you your new Tuskino Costume Layered Armor for any Palico. Enjoy your spoils, MH Rise aficionado!