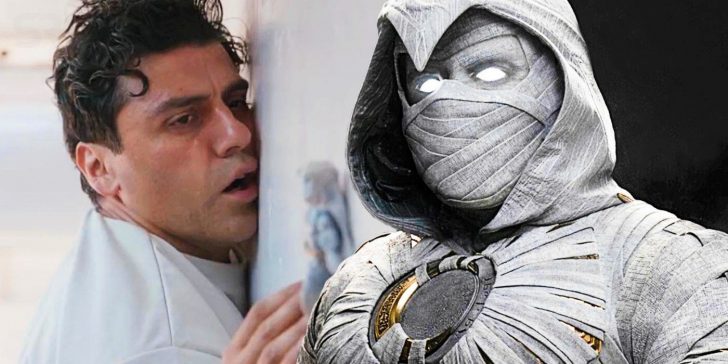 Just as audiences were beginning to feel comfortable with Marvel Studios’ new Disney+ series, Moon Knight episode 4’s twist ending pushes the show in a new direction while forcing audiences to question if anything that has happened so far is real. Moon Knight episodes 1-3 introduced viewers to the newest hero in the Marvel Cinematic Universe, Moon Knight. Played by Oscar Isaac, the duality between the character’s identities of Marc Spector and Steven Grant and their roles in serving Khonshu, the Egyptian moon god, became the backbone of Moon Knight. After watching them work to stop Arthur Harrow (Ethan Hawke) from awakening Ammit, Moon Knight episode 4 flips the script on the whole story.

From the very beginning of Moon Knight’s story, Marvel Studios has given audiences reasons to question what is happening. Moon Knight episode 1 didn’t show the events that occurred any time Marc Spector took control, while Steven Grant’s experience with the supernatural raised questions from others in the universe about his mental health. However, the series has done a mostly stellar job of exploring Moon Knight’s alters as part of its globe-trotting adventure and exploring the relationship between Marc Spector and Steven Grant—and possibly a third identity.

When it comes to Moon Knight episode 4, the first 35 minutes of the episode stick to the same tone and story that viewers have been following for three weeks. However, the final 15 minutes introduce a brand new location and concept for the series to play with during its final two episodes. Moon Knight’s episode 4 twist ending, where Marc Spector is seen as a patient in a psychiatric hospital, will surely leave audiences with more questions than answers.

Was Anything That Happened Before In Moon Knight Real?

Marc Spector’s new reality as a patient in a psychiatric hospital completely changes the context of the previous episodes, as it could mean that everything that happened before in Moon Knight didn’t really happen. The institutional setting mirrors the adventurous world that Marc previously inhabited, but most of the details have changed and could be viewed as embellishments on the part of Marc’s mind. Layla is a friend of Marc’s and a fellow patient, not his estranged wife who goes on adventures with him. The Moon Knight costume is seen on an action figure Marc possesses, while his Steven Grant identity and the basis of the globe-trotting adventure and role of a moon god seemingly came from a low-budget film. All of these details immediately raise red flags about what has been shown before, as it could indicate that the first three and a half Moon Knight episodes did take place in Marc’s head.

It’s an intriguing possibility to consider, as Moon Knight episode 4’s twist ending would flip everything audiences thought they knew about the MCU’s newest character. This would require Marvel to reteach Marc Spector’s actual origin and reveal that he might not even be a superhero. That would of course mean that Moon Knight and Layla’s adventures chasing after Arthur Harrow didn’t really happen, and that what has taken place so far will not influence the larger Marvel universe. Perhaps this is the reason why Moon Knight has had so few MCU references. Marc Spector could’ve spent the majority of his life in this psychiatric hospital, meaning he’s largely unaware of the massive MCU Phase 4 events happening outside the all-white walls of his reality.

The idea of Moon Knight’s events before episode 4 not really happening gives the series a great deal of freedom with its storytelling over the final two episodes, if that is what the show ultimately explores. There is great emphasis put on this possibility, which raises more questions about what happens afterward. Since Moon Knight indicates that the central protagonist might be an unreliable narrator, there is potential for other events that occur to also be part of Marc Spector’s imagination, further blurring the lines between what is real and what is fake.

One of the big moments in Moon Knight episode 4’s ending that raises questions comes after Marc Spector escapes from Arthur Harrow’s office. It is after this that he finds a sarcophagus that happens to contain Moon Knight’s other alter, Steven Grant. Marc opens the lid of the sarcophagus to let Steven out, and they are both bewildered over the interaction they are now sharing. While Moon Knight previously allowed the two identities to interact by talking through mirrors, the hospital setting is the first instance where they are both physically present at the same time and able to interact in a physical sense. Neither of them has any idea how this is possible, but they are in agreement that the last thing they remember was Ethan Hawke’s Arthur Harrow shooting them in Ammit’s tomb.

Steven Grant and Marc Spector interacting in a physical realm opens up the possibility that Moon Knight’s hospital is not real. Unless the MCU plans to dramatically change what is possible with Moon Knight’s identities, this would not be achievable in the real world. That would mean that Moon Knight episode 4 does include a section of its storytelling beyond what is real, only now the fake world is attempting to convince Marc that it is the real one.

If Moon Knight’s events did occur as previously presented, then that could mean that Moon Knight episode 4’s psychiatric hospital is a mental construct of some kind. The basis of this argument comes from everything that happens in the hospital, as well as what Moon Knight’s MCU future is expected to look like. In its simplest form, the idea that Marc is now in some type of mental construct could explain the fantastical and unexplainable elements of the hospital that come in Moon Knight episode 4’s ending. This includes having a physical interaction with Steven Grant to meeting a giant hippo god. While it is possible that the hospital is real and these moments are part of Marc Spector’s imagination, it makes everything that Moon Knight is involved in from here on out something that needs to be taken with a grain of salt just in case it is not true.

Marc Spector (and Steven Grant) being trapped in a mental construct designed to look like a psychiatric hospital raises its own set of questions— namely, who is responsible for this new location? This could be the result of Arthur Harrow unleashing Ammit, as the god of judgment could be over Moon Knight’s interference and decides to lock him away in some other realm. In this scenario, Marc’s mind might be responsible for making sense of this new location to the best of its ability, resulting in a psychiatric hospital setting and familiar faces as patients and workers. It could also be a mental construct created by Khonshu to allow him to interact with Marc Spector. This might even be the inside of Moon Knight’s mind, where Marc and Steven have been trapped because another identity has locked them out from the body. The comics have even used a similar idea to represent Marc Spector’s tomb, forcing him to fight his way back to Khonshu.

Related: Moon Knight: Khonshu Could Have A Much Darker Plan For Marc Spector

The last event in Moon Knight before episode 4’s twist ending could also be telling. Arthur Harrow shot Marc Spector in the chest twice. While Marc usually would have Moon Knight’s healing suit to protect him, Khonshu’s banishment by the Egyptian gods left him vulnerable. It’s noteworthy that the two shots to the chest mirror how Marc Spector originally died on the night he became Moon Knight. As debate rages on about what happens for him going forward, it is certainly possible that Arthur Harrow killed Moon Knight at this moment. If this did happen, the final two episodes of Moon Knight will surely explore Khonshu regaining his freedom, pairing himself to Marc once again, and bringing him back to life so he can be Moon Knight and stop Arthur Harrow.

Who Is In Moon Knight’s 3rd Sarcophagus?

Part of the mystery presented in the Moon Knight episode 4 ending is another sarcophagus, the third one featured in the episode. The rattling Egyptian coffin clearly contains someone or something, but no answer is given. There are some intriguing options, though. Since one of Moon Knight’s identities was already in a sarcophagus, this one could include another alter, such as Jake Lockley. This would help reinforce the idea that the hospital setting is a mental construct of some kind. Other than Jake Lockley, another likely candidate for who is in Moon Knight’s sarcophagus is Khonshu, if this is a prison from the gods. It likely isn’t Kang the Conqueror, since the design of the coffin doesn’t match Moon Knight’s prior tease of Rama-Tut’s headpiece.

The very end of Moon Knight episode 4 delivers one more shocking twist, as Marc Spector and Steven Grant encounter a giant hippo in the hospital. The hippo is wearing Egyptian-themed accessories, including some scarab-themed pieces. As it is also walking on just two legs and is able to talk, Moon Knight episode 4’s hippo is none other than Taweret, the Egyptian goddess of protection. Despite Marc and Steven’s familiarity with Khonshu’s form, their audible reaction to encountering Taweret indicates they aren’t completely comfortable with all gods.