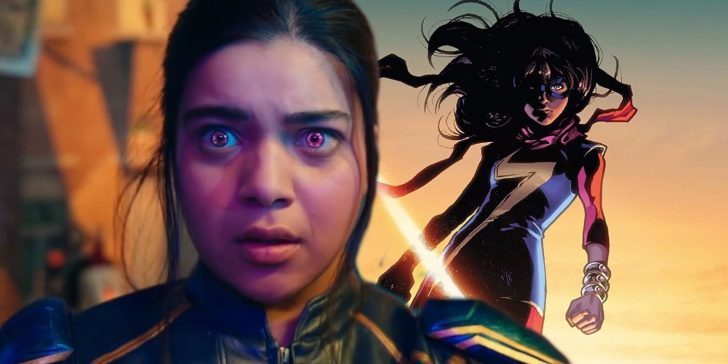 As Ms. Marvel tangles with the ramifications of a multiversal device, fans realize that Kamala Khan has a power far greater than anyone realized.

Warning: this article contains spoilers for Ms. Marvel: Beyond the Limit #4

The baseline powers Ms. Marvel exhibits throughout her Marvel Comics’ history have included the power to stretch, ’embiggen,’ and heal rapidly, but her latest comic reveals that Kamala Khan has a power far greater than fans realize.

In Ms. Marvel: Beyond the Limit #4 by Samira Ahmed and Andrés Genolet, Kamala has been captured by a multiversal enemy she previously believed was her friend. Previously in the series, Ms. Marvel touched a mysterious cube that glowed blue with power and granted her viewing access to the multiverse, but the encounter left her with more than the memory of gazing uneasily into other realities. After she touched the cube, she returned home and found that her whole world had turned into a Bollywood film – one which starred Loki. Her altered reality quickly went back to normal, but she felt some changes within herself once it did. Ms. Marvel’s powers were on the fritz, her healing ability was weakened and she even gained a new ability akin to Spider-Man’s spider-sense. The weirdest aspect of it all, however, is that Ms. Marvel somehow managed to pull someone out of their world and into her own.

When Ms. Marvel touched the cube, she unwittingly pulled a girl named Qarin into Earth-616, and after Qarin arrived, she noticed that she had the ability to transform into Ms. Marvel and copy all of her powers. While Qarin pretended to be Kamala’s friend initially, she was plotting against Ms. Marvel because when Kamala brought Qarin into her world, she destroyed Qarin’s reality and everyone who lived there, including an incredibly impressive variant of Ms. Marvel herself. In Qarin’s reality, there existed an adult version of Kamala who managed to unite the world in total harmony. Known respectfully as Marvel-ji, this version of Kamala seemingly led a successful effort to eliminate pollution, end all wars, and bring everyone together, saving the world.

This version of Kamala proves that Ms. Marvel doesn’t have to use her powers to save the world, just the power of her leadership, brilliance, and kindness is enough to bring everyone together and make Earth a better place to live. Marvel-ji’s efforts were so effective, in fact, that when Qarin was pulled into Earth-616, she felt sick from all of the pollution in the air as her world had zero pollutants. Ms. Marvel has long been positioned as a major leader for Marvel’s next generation of heroes, and this possible timeline underscores the fact that – like Captain America before her – the power she has to unite others under her leadership far outweighs any superhuman ability.

Sadly, in a dark twist of fate, Ms. Marvel completely destroyed the world her variant saved, unwittingly nullifying the ultimate example of her potential. However, just because Marvel-ji’s world was destroyed doesn’t mean Kamala can’t follow in her variant’s footsteps and apply the incredible abilities she had within herself even before she got her superpowers. Ms. Marvel’s power is far greater than fans realize as it has been proven to be enough to save the world.

Next: Even Captain Marvel Admits Her Version of Venom Is Cool

The Spider-Man Character Sydney Sweeney Should Play (Not Black Cat)