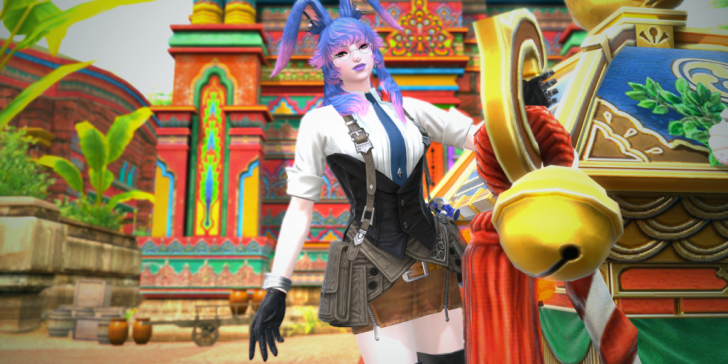 Crafting comes with privileges in Final Fantasy XIV — not the least of which is the ability to create your own rare fashion items out of hard-to-get materials. I’ve collected quite a few great pieces of glamour over the years (and bought even more off the Mog Station like the easy mark that I am). Yet the one I’m currently obsessed with isn’t that rare at all. It’s not even necessarily meant to be a fashion statement so much as a useful tool for leveling up my crafter. I’m talking about the Level 90 “AR-Caean Velvet Work Shirt of Crafting” — a ridiculously-named top that nonetheless has me obsessing over my Warrior of Light in Gpose for days.

The latest FFXIV update, Patch 6.1, introduced an all-new set of much better crafting gear. And it’s become one of those situations where I didn’t appreciate what I had until I almost lost it. Normally, I would simply swap out my work shirt for the newer model with better stats. That new gear, the Pactmaker’s Vest, isn’t bad either! It’s a cute sort of wrap with an accented sash ending in a long half skirt that almost looks like a cape. It’s tied off at the belly in a way that looks nice without being overbearing, giving the impression that it was done to get the fabric out of the way while smithing Gunblades.

By contrast, the AR-Caean Velvet Work Shirt (I’m going to stop typing its full name after this) looks like something that fell out of a noir movie, or at least a photo shoot trying to evoke a noir movie. It’s a crisp, white work shirt. Thick pleats down the center help draw the eye to a low, snug vest that dips low enough to form a nice diamond shape with the underside of the ribcage. The shape is mirrored by a diamond-shaped necktie tucked into the vest — which lends Just Enough Final Fantasy to the otherwise pretty mundane garment. That and the two suspenders slung over the chest that actually clamp onto satchels at either hip.

The whole thing could scream sexy tomboy secretary from the 1920s or sexy lesbian detective from the 2020s, even though the utilitarian touch of these two bags reminds you that this is someone with tools. As an added bonus, either intentionally or by happy accident, my crafting gear clips into one satchel such that it looks like my hammers and such are sticking out of a pocket.

I love this look. You might already know that if you read the site. I’ve been flooding my various FFXIV articles with vanity shots of my perfect Warrior of Light for a while now. I’m currently complementing the top with Lightning’s miniskirt from Final Fantasy XIII. Like I said: I’m a huge sucker. I’m also a huge slut in-game and out, and like to dress like one. This particular skirt is great for that if you don’t cover it up with a long top. Though it normally comes with its own bag strapped to the thigh, which might have been too much for the balance, long boots actually override and disable that part of the clothing — hence my pair of No. 2 Type B Boots.

I’m actually not thrilled by my choice of footwear. 2B’s boots (acquired from the NieR: Automata crossover raid) go well with basically everything in the game — which is exactly the problem. Far too many of my Glamour Plates use them as the default. There are other thighboots in FFXIV, of course, but glamour is still restricted according to class. Crafters can only don fashion available to crafters. My next best options all have big, obvious garter belts, which isn’t quite the sort of evocative, subdued sexy I’m going for. Like I also said before: I care about balance, at least for the time being.

Y’see, I’m also terribly fickle and might lose interest in this glamour within a week. I publish short stories for fun in my spare and try as I might to pump out the occasional fanfic (sometimes even centering FFXIV), so I just can’t stop myself from creating original characters for nearly every tale. Part of this is because I love writing and designing new outfits in my head. The outfits I use in this game are ones I regularly draw inspiration from. That’s why I’m taking screenshots and sharing them while I can — before I forget, move on, and become obsessed with something else entirely. I figure that by keeping a record of what I liked before, maybe I can inspire myself again in the future. And if it could inspire me, I figured, what the hell? Maybe my thought process will be a good inspiration for your fashion needs in the future.

Not to mention it’s yet another excuse to show off how good both my bunny and the fashion in FFXIV have gotten lately. The shirt isn’t even hard to get — you can buy it off any Market Board or make it yourself with entirely basic materials. I love that FFXIV still surprises me with new looks that I absolutely need to work into my rotation somehow. Sometimes, it’s just worth shouting out a piece of video game fashion that really speaks to you.