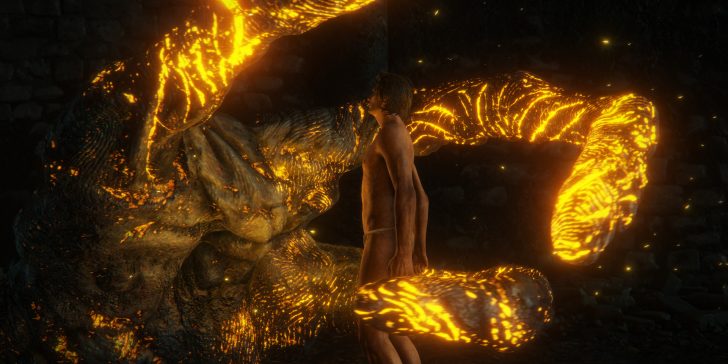 So, I’m finally getting to the later (later-ish?) portions of Elden Ring, after almost 88 hours of the game. My old rune-farming location in Caelid (which I’ll talk about later) just isn’t cutting it anymore, even with the impressive boosts I get from the Golden Scarab Talisman (which gives about a 20% boost) and a gold-pickled fowl foot item (an additional 30% a pop). Levels are getting to be about 60,000 runes per, and lord knows, my stats need the help.

So, I went searching the internet for good rune-farming locations. One thing that kept coming up was the “chicken farming” spot in Mohgwyn Palace, a location you can access after completing White Mask Varr’s quest. The basics are familiar to anyone who has googled “Elden Ring Rune Farming:” there’s a big, nasty bird who can easily be picked off for a hefty load of runes. You can refresh at a nearby site of grace and rinse and repeat until you have a goldmine.

Unfortunately, most of the existing guides on the internet left me puzzled as to how to get there, exactly (they aren’t bad, I’m just a little… dense… when it comes to Elden Ring). I went in thinking there was a bird on a perch that needed to be knocked down from a very specific angle, and I couldn’t, for the life of me, figure out where it was.

Thankfully, it’s pretty easy to find the correct site of grace, activate it, and get down to bird-hunting. The bird is not actually on a perch at all, the area is just constructed in such a way that if you draw its attention, it will run blindly at you over the side of a cliff, with basically no risk to you. There’s no perch, no need for a perfect angle or even especially great aim. All you need to do is find the Palace Approach Ledge-Road site of grace, have a bow equipped, and shoot an arrow at the damned thing from the safety of the ledge. The fact that it’s so close to a site of grace (and relatively safe, as long as you don’t go massacring the alburnaurics nearby) makes it so easy to rack up tons and tons of runes with very little effort.

Here’s how to do it.

Once you complete White Mask Varr’s quest, he’ll give you the Pureblood Knight’s Medal item. Simply go into your inventory and select “use” on the item, and you’ll be transported to the Dynasty Mausoleum Entrance site of grace.

You’ll start at the dynasty mausoleum entrance site of grace, then cross part of the lake to reach the Palace Approach Ledge-Road site of grace. It’s on the bottom right of the map in this image.

It’s good to activate that right away, and then turn about sixty degrees to your left, jump down into the wooded path, and get on your horse. A bunch of high-level enemies will go after you, so it’s safest to ride on Torrent and sprint past, hugging the wall to the right. Once you get to the red lake, stop hugging the wall (this is where I went wrong, and died to that goddamned bird about two dozen times before trying something else.)

Just cross the lake, staying towards the left side of the area. There are several small caves to the far left with goodies — these are very useful, but the red guards will aggro here, so be careful.

There’s a path straight ahead (facing the lake from your perspective, exiting the woods) that leads up a hill with a bunch of sleepy albinaurics. You can run right past them (there are red guards who are alert, and can ruin your day), but once you hit the Palace Approach Ledge-Road site of grace, all will be gravy. Simply activate it, walk a couple of feet to the ledge, pop that bow on, and shoot the nasty bird down below.

I’ve included screenshots of the specific locations here, and you can refer to this tiny video I popped onto twitter for specific placement on the ledge. It’s not nearly as tricky as I thought it would be, once you’re up here!

You can also nab 40k+ runes from mowing down the sleeping albinaurics (and their much more dangerous red buddies) on the very same hill. I did this a few times, to be sure! That plus the bird can give you close to 70k runes in about a minute of farming.

However… messing up the sleepy guys actually made me feel bad. And just doing the rinse and repeat on the bird is so fast and painless that it’s my go-to (plus, like I mentioned, that bird killed me so many times trying to find the ledge that I don’t feel bad at all).

As I mentioned earlier, I was using the battlefield next to the Impassible Greatbridge site of grace in Caelid as my standby for rune farming earlier on! It’s still useful for grabbing 7-11k runes in a run (using the Scarab and a gold-pickled fowl foot, especially, the bonuses stack to about 50%), and good for farming beast blood and a number of soldier armor pieces as well. It also has the benefit of having enemies that chop up one another, doing most of the work (but you’ll want to clean up or have a nicely-leveled spirit ash friend do the mopping up) to get the full spread of runes.

I liked to pull a few zombie dogs from uphill down into the fray near the soldier’s encampment. They all stab/eat each other, and all you need to do is run around pulling aggro, not get killed, and then jump up on one of the small ledges to watch the chaos reign.