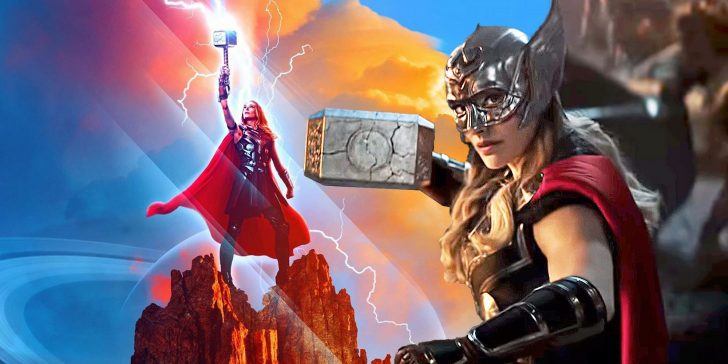 Natalie Portman shares her own Thor: Love and Thunder poster which features her worthy character of Jane Foster wielding Mjolnir as The Mighty Thor.

Natalie Portman shares her own Thor: Love and Thunder poster as The Mighty Thor. Portman played Jane Foster in both 2011’s Thor and 2013’s Thor: The Dark World, a scientist who gets involved romantically with Chris Hemsworth’s Thor Odinson, accompanying him on his adventures throughout both films. Portman did not appear in Thor: Ragnarok and it was later revealed that the two characters had split up. However, Portman reappeared as Foster in Avengers: Endgame, when Thor traveled back in time to secure the Aether from her, which was the essence of the Reality Stone.

Portman was announced to be returning to the franchise at Comic-Con 2019, where the actress held Mjolnir onstage, revealing that she would be playing The Mighty Thor in Thor: Love and Thunder. Foster’s Thor was orchestrated by writer Jason Aaron in the comics, where she was suffering from cancer and eventually called to Mjolnir after Thor Odinson lost the ability to wield it. After picking up the hammer, Foster was transformed into The Mighty Thor, where she wielded the identity for a time, before eventually becoming a Valkyrie.

The trailer for Thor: Love and Thunder dropped this week, along with a poster featuring Hemsworth’s God of Thunder. Now, Portman has entered the frame, sharing her own Thor: Love and Thunder poster, featuring her Jane Foster as The Mighty Thor. Foster is unmasked in the poster, showing that it is, in fact, Portman in the costume, whereas she typically wears the traditional helmet to mask her identity (in the comics, at least). It’s the same style of poster as Hemsworth’s, making it a complementary entry in the marketing campaign, with the poster reading, “The one is not the only.” Take a look at the poster below:

Portman has been a prolific actress in Hollywood, starring in a myriad of high-profile projects throughout her career, including an early starring role as Padme Amidala in the Star Wars prequels. The actress won an Oscar for her role in Darren Aronofsky’s Black Swan in 2011 and has continued to appear in notable films, such as 2016’s Jackie and 2018’s Annihilation from director Alex Garland. The actress will next appear in the drama May December from director Todd Haynes. Even taking Star Wars into account, Mighty Thor is arguably Portman’s biggest role to date. This time, she gets to be a superhero and could have a future in the MCU down the line depending on how things play out.

While Jane Foster’s journey as The Mighty Thor was met with some controversy early on, she ended up becoming an amazing character in the comics, which ultimately made her more than a love interest, becoming a hero in her own right in the Marvel Universe. It’s unclear how much of Aaron’s comic origin story Portman’s Foster will carry in Thor: Love and Thunder, but it will no doubt be a cool and interesting one. Director Taika Waititi has proven to be able to take the characters from Thor’s world and make them into something unique, fun and deep with ease, and no doubt Jane Foster will get that treatment in this iteration.