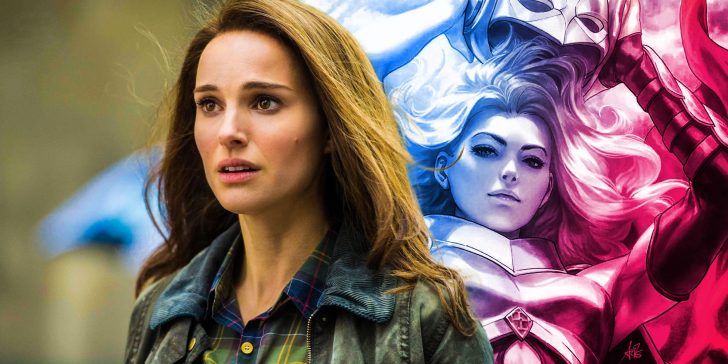 Natalie Portman’s return in Thor: Love & Thunder highlights a problem with the MCU – the emotional impact of comics cannot be copied.

Natalie Portman is returning to the MCU as Jane Foster/Mighty Thor in Thor: Love & Thunder — but, ironically, the nature of her return points to a major problem with this particular comic book adaptation. The latest Thor 4 footage reveals Natalie Portman as Jane Foster, rocking her new costume as Mighty Thor and holding a very much intact Mjolnir. This means that Mighty Thor has been deemed worthy of Mjolnir’s great power, and the new heroine will have a lot to prove in light of this. While her impactful presence is sure to do wonders for Taika Waititi’s upcoming Thor movie, many are worried about the arc provided by the comics, and how that will translate into the MCU film.

The idea of Mighty Thor was a popular one, and it is hardly surprising to see Marvel Studios adapting it for the big screen. The MCU’s Jane Foster is different from the comics — as an astrophysicist rather than a nurse — but she is destined to be transformed into the Mighty Thor. Natalie Portman, who played the part in the first two Thor films, is returning, not just as a love interest but as a superhero in her own right. More Portman is always welcome, but this highlights a problem many comic book adaptations face.

In 2014, comic book writer Jason Aaron changed the Thor franchise forever. The “Original Sin” event ended with Thor Odinson rendered unworthy to wield his enchanted hammer, Mjolnir. Soon Marvel introduced people to a new Thor, ultimately revealed to be his ex, Jane Foster. One of the best parts of Jane Foster/Mighty Thor’s comic book reveal was the journey that brought readers to the revelation. Here’s how Natalie Portman’s Thor 4 return shows the problem with most comic book adaptations, and whether or not she’s the right choice for the new superhero.

The MCU Has Already Shown Mighty Thor’s Identity, Unlike The Comics’ Reveal

Clips from Thor: Love & Thunder have revealed Natalie Portman’s Jane Foster in full Mighty Thor garb, basically cheating viewers out of the arc offered by the comics. It is easy to forget the identity of the female Thor was originally a mystery. In fact, the first Mighty Thor run featuring this character focused on the idea that she was an enigma. Thor Odinson himself put together a list of all the women he could conceivably imagine being her alter ego, and he ran through this checklist only to eliminate every single name. Jane Foster was crossed off the list because she was going through chemotherapy, and neither Thor nor the readers believed she could actually be the Goddess of Thunder. In reality, Jane’s cancer treatment was actually the reason for her worthiness – and every time Jane transformed into Thor, it reversed the effects of the chemotherapy. Mjolnir was literally killing Jane, but she considered it a price worth paying because she believed the Nine Realms needed a Thor so badly.

But here is the problem with Thor: Love & Thunder: the mystery has already been resolved. An accurate recreation of this popular comic book storyline is impossible, precisely because there is no potential for that “shock factor.” This is why Marvel has not even attempted to keep the identity of Mighty Thor a mystery; in fact, they revealed Natalie Portman’s return alongside the announcement of Thor 4 itself. It is a shame the emotional impact of Jason Aaron’s excellent story can never be effectively duplicated.

Footage from Thor: Love & Thunder proves that Natalie Portman is the right choice for the role, even though the series has done away with the mystery of the character reveal. Portman’s Jane Foster has been an intriguing character from the get-go, and her absence from the series has been felt. The latest clips from Thor 4 have been impressive, and the reveal of Jane Foster’s Mighty Thor is a part of that. While Mighty Thor’s identity has already been shown, it doesn’t mean that some of the more heartwrenching aspects of the character have fallen to the wayside — like Jane Foster’s cancer diagnosis. The actress has hinted heavily that the diagnosis will play a role in her evolution into Mighty Thor. Portman has the acting chops to pull the storyline off, and now the biceps to simultaneously wield Mjolnir. So while the lead-up to Mighty Thor’s true identity has been forgone, the more integral parts of her storyline look to be untouched.

That is not to say there are no mysteries around Thor 4, however. The identity of the female Thor has been substituted with another enigma: the question of just how Jane Foster acquired Mjolnir in the first place. In the MCU, Mjolnir was destroyed by Hela in Thor: Ragnarok, so it should really be impossible for another to wear the mantle of Thor Odinson. Every piece of footage for Thor: Love & Thunder is being pored over for clues to explain Mjolnir’s continued existence or restoration – and that is one mystery Marvel would be wise not to reveal until the film itself.

Next: Thor: Love & Thunder – Every Theory On How Jane Foster Gets Her Powers