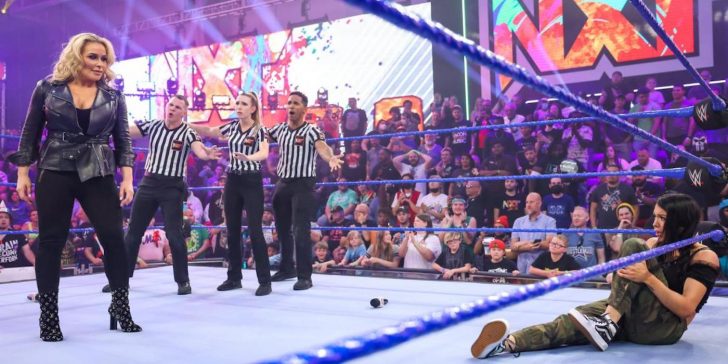 NXT has undergone some very big changes recently — 2.0 may have launched back in the fall of 2021, but it remains a work in progress.

MSK vacated the NXT tag titles this past weekend after the release of Nash Carter, leading to Pretty Deadly capturing the belts in a gauntlet match on Tuesday night. This was the team’s in-ring debut on NXT, and it was a sad night for Bivens and his large sons. Of course, suddenly discovering terrible pictures of your brand new champs aren’t the only shake ups the brand is going through. A few weeks ago, Dolph Ziggler appeared within the neon ropes, defeating Tommaso Ciampa and Bron Breakker in a triple threat to earn his first NXT Championship. His reign lasted a few weeks, and ultimately did absolutely nothing for him or the brand before Breakker reclaimed the title, but it was kind of exciting for a few days. Last night, we saw another long term main roster member make the jump to central Florida’s favorite venue when Natalya came out to interrupt a promo from Cora Jade.

Jade was thrilled to meet with her idol in the ring, and the crowd was loving Nattie. Like, loving her. The Queen of Harts cut a promo playing her best Elle Fanning in The Girl from Plainville as she cried very dry tears and congratulated Cora on all her hard-earned success, before declaring her the bleak future of NXT and delivering a slap. She then put Cora in the Sharpshooter while wearing her heeled LV booties and a tight leather jacket, which seems a feat much easier said than done. After Cora tried to tap out during a segment that definitely had no rules, Nattie skulked around backstage and declared she was putting the NXT women’s division on watch, before accepting a challenge from Tatum Paxley.

Natalya, much like Ziggler, is a a bit of a bizarre choice to bring down to NXT. Sure, she’s one of the most recognizable women in the company — actually, she is the longest tenured member of WWE’s women’s division. She’s been around for a ton of historical events WWE claimed over the past decade; the move from Divas to Superstars, Hell in a Cell, a women’s Royal Rumble. If Stephanie McMahon came out and made a big deal out of it, you know Nattie was behind her, clapping.

Despite this, she doesn’t boast quite the same resume as, say, Bayley or Sasha Banks. Her most recent gold was a tag team title run alongside Tamina last year; she then competed for the same championship again at WrestleMania this year, this time teaming with Shayna Baszler. The two were, unsurprisingly, not successful, and their partnership did not have much longevity. Still, in many ways, Natalya’s been a pillar for the division — maybe not a standout, maybe not someone who’s getting all the title shots, but certainly someone who can step in the ring and make it work with just about anybody. She’s been willing to run with whatever the company has handed her, and while it hasn’t all worked, she’s at least stuck around to move onto something better.

But she’s always struggled to find her footing in main event feuds. Her two singles title runs were with the Divas Championship and the SmackDown Women’s Championship, the latter of which was all the way back in 2017. She’s always been around to rotate into title competition, but she hasn’t felt like a real threat to any champion since that SD title run. While very solid in the ring, Natalya’s mainly struggled to maintain a character. She can be counted on to deliver the goods, but top tier stuff is really requested of her. She’s reliable, dependable, but not spectacular, let’s say. People know what to expect when Natalya’s music hits.

Return of the Queen

Sending her down to NXT is a surprise, but the pop she got walking down that short ramp was very welcome. The crowd was floored to see her, and you could tell she was living for it. Her promo to Cora — while exaggerated and over the top — was one of the best she’s delivered in years, and a lot of it was her feeding off the crowd’s energy. Honestly, Nattie has always been much better as the obnoxious heel than the hardworking baby face vet. Her absolute derision of Tatum less than two seconds into meeting her was excellent; I can only hope to make [exasperated noise] work as well as it does for her.

This mix up is less about shaking up NXT (like the very short and equally shocking Ziggler title run accomplished) and more about bringing something new to Natalya herself. On SmackDown, there is very little for her to do. Charlotte and Rousey is happening again, for some reason. Her partnership with Shayna wasn’t rock solid, so we don’t really need an explanation as to their falling out. If Nattie’s move to NXT is semi-permanent, it could be great for her, and the brand.

Right now, the women’s division is in as much of a transitional phase as anything else on the show. But give the roster some time to develop, some solid showings against someone who has lead the main roster women through pretty much everything, and they could find themselves with a few more potential title challengers on their hands. A program with Nattie would help Cora for sure, especially in shedding her “wide-eyed fangirl” routine, which we’ve seen a dozen times over by now.

As of now, there aren’t a lot of options for someone who could genuinely step to Mandy Rose, which could mean Natalya’s first singles gold in half a decade. NXT has a ton of great talent, but none of the women feel able to dethrone Rose at this time, especially when backed by Toxic Attraction.  Even more so, Mandy and Natalya have history from the main roster, and the potential to put on a pretty good match; I wouldn’t be surprised to see Nattie pick up a title run, even if it’s just for a Ziggler-esque amount of time.