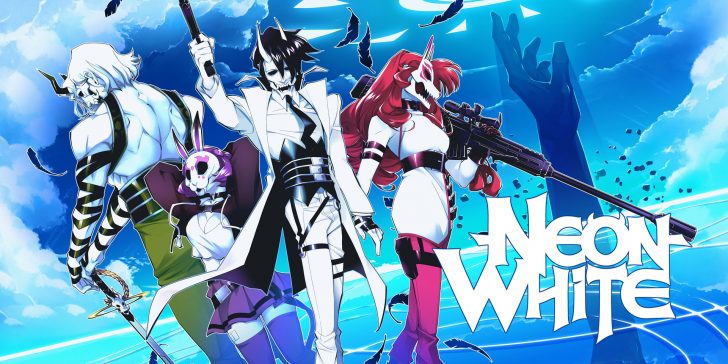 Neon White’s sky is a sweet gradient of cotton candy and coral; almost tropical digital hardcore beats pound through my headphones while I scour heavenly highrises searching for demons to execute. I’ve already cleared this stage once, but I’m back again to chase the fastest route and ride the adrenaline rush that comes with it. I see the dangling thread of a path that could shave a few seconds off my time, but that’ll require me to snipe every demon the instant I see them and precisely grapple onto a corner of this condo to stick that landing. I’ll do anything for the leaderboard glory, so I try, and indeed mess up quite a few times.Then it clicks. I cross my fingers, pop every demon like a porcupine in a balloon shop, toss my hook at the perfect angle, then do a little victory dance as I claim the crown.

It’s only a demo, but damn. This brisk, first-person, card-based parkour is absurdly tight, and this new peek into its supersonic style, lustful dating simulator, and Machine Girl’s bubbly jungle OST proves that you should pay attention to Neon White. You play as Neon White. He was a trained killer and unrepentant sinner in his past life. Now he’s Heaven’s sharpshooting lackey, forced to exterminate rogue demons to keep from getting sent to hell. Stages are set in Heaven’s Gate and have an angelic, porcelain sheen; set pieces like sculptures and potted plants help make these ethereal spaces actually feel lived-in and cartoonishly possible.

On your demon hunting journey you have two main objectives: kill every demon and touch the crystal at the end. Each stage is littered with bright weapon cards that allow you to shoot your stock of ammunition, and use a special ability on discard. For example: when you pick up the yellow Elevate card your crosshair remodels itself, becoming a pistol, and when you throw the card away it gives you a vertical jump; conversely the purple Purify card tosses you an assault rifle that disperses a bomb when you drop it.

In the later parts of the demo you have to utilize these weapons and abilities in tandem, forcing you to make maneuvers like sticking the Purify bomb to a wall in order to rocket jump you towards a collectible. Then it’s time to Elevate at the peak of the jump to grab it. Otherwise, you could chain Dominion grappling hooks with Godspeed dashes to shatter a series of glass panes before breaking out a building and hopping on demon heads. These simple and straightforward combat puzzles make Neon White a vastly revisitable playground that I can already see speedrunners digging for the most optimal ways to break it.

You’re also competing with a bunch of other Neons in similar situations, including the excitable Neon Violet, your buddy Neon Yellow, and the mysterious Neon Red. The writing is decent and, at times, exceptionally promiscuous. There aren’t official credits out, but Steve Blum and SungWon Cho deliver some standout performances as the protagonist and his Garfield-like angel boss, respectively. The post-mission banter is a treat, and you can have more conversations by collecting hidden in-level gifts like limited edition haunted plushies or packs of cigars that build your relationships with fellow Neons and Angels in the hub world. That juxtaposition of fast-paced skirmishes and charming character work is so well balanced that it throws me back to my overly emotional attachment to mythological gods in Hades. Machine Girl’s boisterous beats are the bow that ties Neon White’s aesthetics and play together. Every second during my time with the demo, I couldn’t stop thinking about how well the soundtrack meshes with the rapid parkour pursuit. As a Machine Girl-head I couldn’t stop smiling hearing how each musical WIP helps paint another dimension on the stage’s canvas. A small, sweet touch occurs whenever the music continues as you restart a level (which I did frequently after mistakes). Instead of cutting off or restarting the track, the high-spirited grindcore seamlessly transcends into melodic glue that holds each run together. When you’re in the groove, you can’t be stopped.

Neon White is one of the few games I’ve heartily anticipated this year, and after playing (and replaying) the demo over the past couple days, I’m even more excited to see what secret gifts, bizarre stages, and risqué narrative work is to come when it drops sometime this year. Also, I even more intensely want to open up a pit and go goblin mode at a drum and bass rave…