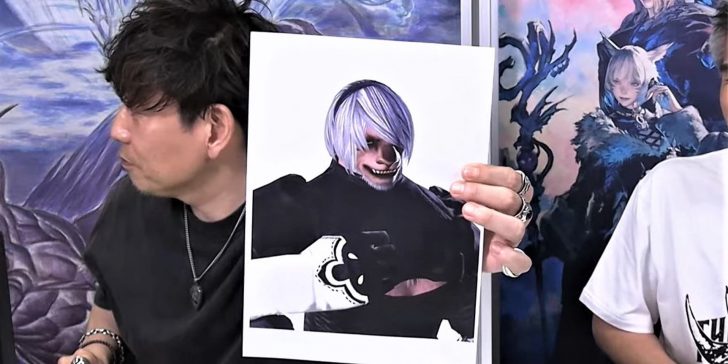 We truly were spoiled with this latest Live Letter from the Producer. With all the new content coming to Final Fantasy XIV, via FFXIV Patch 6.1, there’s no shortage of things to get hyped about. So much of that was captured in the FFXIV Patch 6.1 trailer, which gave us previews of all that good stuff. But one thing that sick trailer didn’t have? The much-anticipated new Hrothgar hairstyles. But we did get a preview of them in the Live Letter itself. Finally, our lion boys can express themselves in much greater fashion! Glamour and Gposing is the real endgame, so they should be able to look good doing it.

During the Live Letter stream, director and producer Naoki Yoshida did his notorious holding-up-a-printed-copy-of-a-screenshot-to-the-camera to show off new Hrothgar hairstyles. And we have them all right here for you to see!

We are perpetually trapped in a never ender spiral of glamour and gposing. Is this a curse? Or some kind of punishment?

Serah is in for a rude awakening when she finds out Snow’s focus was to be the first lion boy l’Cie.

This dude was definitely the frontman for a mid-2000s screamo band I saw open for Underoath.

I sense this Hrothgar is gonna ask to speak with my manager.

Oh, this dude looks sick. I’m not messing with him.

Everything We Know About FFXIV Patch 6.1

We hope you enjoyed this roundup of new Hrothgar hairstyles coming to FFXIV when Patch 6.1 drops on April 12. This is honestly scratching the surface of this particular Live Letter — we even had a live look at the upcoming Myths of the Realm 24-player alliance raid that pits us against the gods of FFXIV. We have more coverage on the way, but you can get the quick details on our official Twitter feed at The Linkshell or watch the Live Letter yourself.