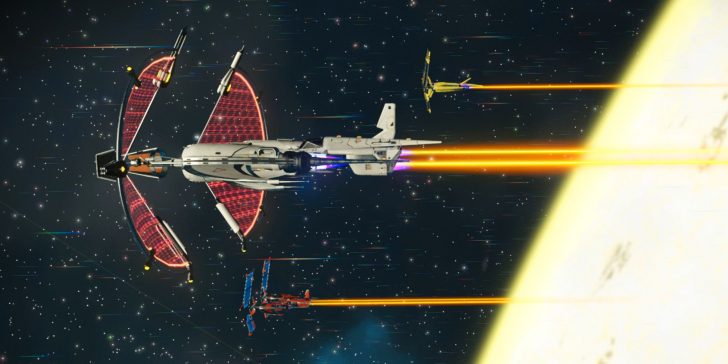 Thanks to the No Man’s Sky Outlaws update, players can now recruit NPC pilots as part of their personal Squadron to help them fight off enemies.

The combat system in No Man’s Sky received a significant upgrade to its combat system as part of the Outlaws update by adding Squadrons to the game. For a long time, many travelers have probably come across ships flying in unison across planets or in space, whether they were peaceful or antagonistic. Although players would receive help from nearby ships if theirs was under attack, everything would return to normal once the threat was neutralized. Squadrons changes that completely by allowing players to recruit new pilots to their cause, permanently.

The No Man’s Sky Outlaws update now allows players to recruit up to four additional pilots that will aid them in battle. Furthermore, these pilots can be summoned even outside of combat and will fly in formation around the player’s ship until a new system is traveled to or the Pulse Engine is activated for a few seconds. The ships will even mimic the flight pattern of the traveler’s ship, making the experience smooth all around regardless if everyone is in space or a planet’s atmosphere. The Squadron can even be dismissed if players want to fly solo, but they’ll automatically come to their aid if any pirates or sentinels attack.

Recruiting pilots is relatively easy in No Man’s Sky, and can be done with almost any NPC in the game. Even pilots that own the new Solar Class Starship in No Man’s Sky can be recruited into a Squadron, effectively giving players the option to pick and choose which ships they want their crew to fly alongside them in. Speak with any pilot that has their ship docked at a station or trade post, and they’ll sometimes have the dialogue option available that allows them to join the Squadron.

How To Increase (& Upgrade) Squadron Size In No Man’s Sky

Although it’s easy to recruit members, players still need to make the appropriate accommodations aboard their Freighters. Recruiting pilots for a Squadron cannot be done without access to a Freighter, so it’s important to get one as soon as possible. A new feature in the No Man’s Sky Outlaws update made it so the Squadron can be managed from the front of the central command console located on the bridge of Freighters. This is also where players have traditionally been able to manage their frigate fleet in the game as well.

Each new Squadron opening must be purchased with Nanites, and the price drastically increases with each space opening. The first Squadron placement only costs 800 Nanites, but the final one costs 10,000. Furthermore, players can upgrade their pilots from C-Rank to S-Rank with Nanites as well, and the pilot’s rank does not reflect their ship. For example, an A-Rank pilot can be recruited flying a C-Rank ship, but players can only upgrade the pilot’s rank. To upgrade everything quickly, travelers may want to consider using the No Man’s Sky infinite money glitch from the Outlaws update, which also includes a way to get infinite Nanites.

Next: No Man’s Sky: How to Get a Forged Passport

No Man’s Sky is available on the PlayStation 4 and 5, the Xbox One, Xbox Series X|S, Steam, Android, and Microsoft Windows.

Elden Ring: Where To Find The Dragoncrest Greatshield Talisman