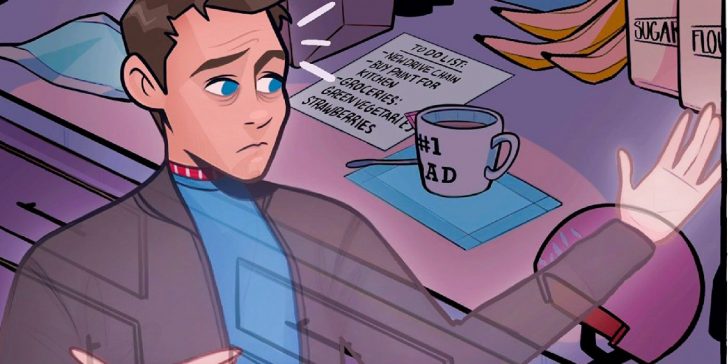 A Spider-Man fan comic imagines the specifics of how Tobey Maguire’s Peter Parker was transported across the multiverse to the MCU in No Way Home.

A piece of Spider-Man: No Way Home fan art imagines the details of how Tobey Maguire’s Peter Parker was brought into the MCU. The third installment of Tom Holland’s Spider-Man trilogy had major expectations placed on it by fans who were anticipating a multiverse crossover event after seeing trailers featuring the villains from prior Spider-Man film series, like Alfred Molina’s Doc Ock and Jamie Foxx’s Electro. When the film released last year, audiences across the world were delighted to have their anticipation rewarded as, in the film’s final act, Holland shared the screen with both Maguire and Andrew Garfield as all three teamed up to thwart a sinister gathering of foes.

The return of the previous Spider-Men was a huge moment for the comic book movie sub-genre and was likely key to No Way Home accumulating enough box office revenue to become the sixth highest grossing film of all time. Maguire’s reprisal in particular was of great interest as it had been 14 years since he played the part in Sam Raimi’s Spider-Man trilogy, and the actor had appeared in very few films through the 2010s. Maguire’s Parker inevitably received several fan-pleasing moments from a reunion with Molina, whom he appeared against in 2004’s Spider-Man 2, to his charmingly understated entrance stepping through a portal into a small living room.

Fan artist @mmh_arts has imagined what Maguire’s entrance into the MCU might’ve looked like from his perspective in a fan comic detailing his multiversal jump. The comic begins with Maguire’s Peter Parker in his own universe, going about his daily life as he begins to fade away and suddenly reappears in a very different New York City. Following his Spider-sense, he ends up in Times Square witnessing a news broadcast of J.Jonah Jameson reporting on the reveal of the MCU Peter’s identity. Maguire’s Peter comprehends his situation as he remarks on how weird life as Spider-Man is, as per the opening monologues of his own films, before someone in the crowd calls him out on it. Check it out below:

The piece is an interesting take on what this Peter Parker’s experience may have been like when he was pulled across the multiverse. Eagle-eyed fans will notice several Easter eggs within the artwork, such as figures in the Times Square crowd being modeled after characters like Miles Morales and Gwen Stacey, to Peter’s shopping list including references to dialogue from the Raimi films, such as “Strawberries” and “Green Vegetables.” Perhaps most interesting is that, before being transported, Peter appears to be preparing a drink in a mug that reads “#1 Dad” inferring that this older version of the character is now a father.

With Maguire and Garfield’s return in Spider-Man: No Way Home being so well received, fans are presuming that they haven’t seen the last of either actor in the part, raising the question of when exactly they might be seen next. In Maguire’s case, there is speculation that he might reappear in Doctor Strange in the Multiverse of Madness, fueled by reports of numerous cameos and the film being directed by his Spider-Man alumni, Sam Raimi. Demand for a potential Spider-Man 4 has also never been higher, with a potential plotline of Maguire raising a daughter to become Mayday Parker, a.k.a Spider-Woman, touted by fans. Maguire was apparently enthusiastic about keeping his character’s history post-Spider-Man 3 vague, which seems could have been done to leave the door open for future films. This fan art does a great job of imagining more of what life was like for this version of Spider-Man in the years that he was away and demonstrates a clear fan desire to see his history expanded upon.

Next: No Way Home Was Smart To Not Show Maguire & Garfield Spider-Man Epilogues

Matthew Jasper is a Film & TV News Writer for Screen Rant, producing articles on recent events within the industry. Matthew has worked under Universal Pictures UK, the BBC and local film festivals during his developing career.

Based around Birmingham, when not watching and writing about various Movies and TV Shows, Matt can be found trying to beat his PB in the gym or putting a dent in his never-ending reading list.