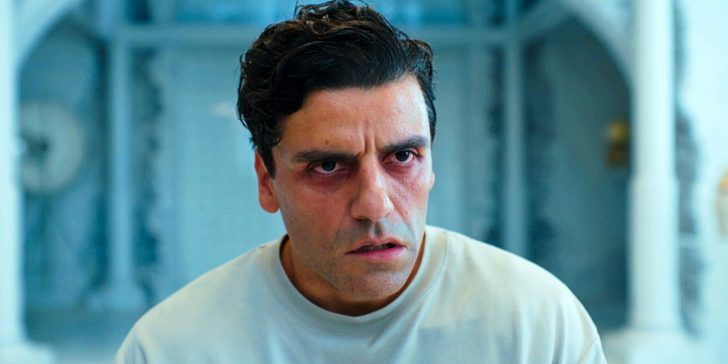 Moon Knight stars Oscar Isaac and Ethan Hawke share their reactions to and thoughts about the major twist ending in episode 4 of the series.

The premiere of episode 4, “The Tomb,” has continued to keep audiences on their toes. The beginning of the episode continued to follow Marc’s, Steven’s, and Layla’s mission to get to Ammit’s tomb and find her before Hawke’s villain Arthur Harrow. Nearly the entire episode is spent within the tomb shaped like the Eye of Horus that functioned as a map to where Ammit was kept in stone. Dark revelations and undead forces led to Marc, Steven, and Layla being placed under an immense amount of pressure that ultimately got Marc and Steven shot twice by Arthur after he passed Ammit off to Layla, an event that cut to Marc and Steven being held within an all-white facility of some sort where various people from their lives all played a role.

Related: Marvel Hints Moon Knight Has Been Active In The MCU Longer Than Spider-Man

Now, Isaac and Hawke have shared their reactions to the major shift in narrative viewers experienced with the final minutes of the new episode. In an interview with The Wrap, Isaac shared that the ending was meant to disorient viewers just when they felt as if they had a handle on what was going on. He added that “the whole rug gets just yanked from under everyone and we’re thrown into a whole different scenario,” something that excited him. For Hawke, this twist is a way to show just how fractured Marc’s and Steven’s minds have become due to Khonshu’s presence. It proves that the DID system altogether is an “unreliable narrator” and their “point of view might be misleading.” Hawke went on to reveal that clarity will be provided, “but just not yet.”

Isaac: “I imagine people will feel like once we’re finally starting to get a handle on what is happening, the whole rug gets just yanked from under everyone and we’re thrown into a whole different scenario. And that’s very exciting.”

Hawke: “We have a hero who has a fractured mind. And he’s an unreliable narrator. And what you realize at the end of four is that you’re being told a story from his point of view, and his point of view might be misleading.

“And what the rest of the journey — his journey is to integrate all his selves into one, and as he integrates it, reality itself gets clearer. So things will be made clear, but just not yet.”

The featured sequence truly did feel like a dramatic shift, especially given the gravity of what Marc and Steven experienced just before viewers were thrust into the film that played at the facility. It’s unclear as to whether or not the facility is simply imagined within Marc’s mind or if the whole story up to this point has been imagined by him, but as Hawke hinted, this will likely be resolved in the final two episodes of the series. The twist happening at the moment of ultimate reckoning has built up anticipation even more than before for the next episodes as viewers anticipate finding out what’s really happening to Marc and Steven, as well as whether or not they’ve survived Arthur’s fatal shots.

This just adds on to the list of reasons why Moon Knight has continued to resonate well with Marvel fans. The series has also shown quite a bit of dedication to the comics from where the hero originates, which has no doubt helped in drawing audiences in. With the next episode right around the corner, viewers will have a lot of time to process this twist ending, though clips seen in various Moon Knight teasers and trailers made provide some idea of what’s to come. Audiences have had yet to see the sequence of Marc and Steven falling through mid-air, as well as the scene of Khonshu alongside Marc as he dons his Moon Knight ceremonial armor. What viewers can likely rely on is an epic two-episode finale that will take everything that’s been revealed thus far and bring it all together for an epic supernatural battle between the two avatars of Egyptian deities.