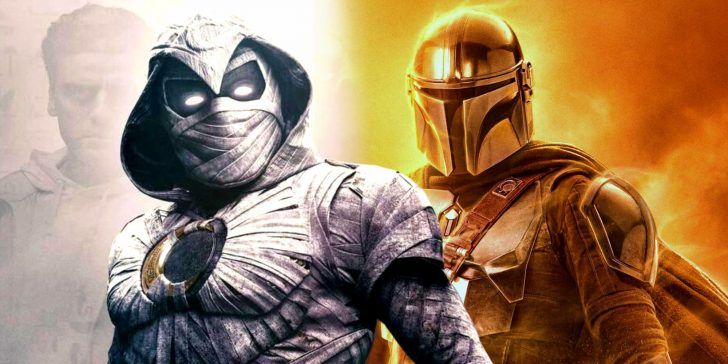 Oscar Isaac says in an interview that his Moon Knight hero would definitely beat his friend Pedro Pascal’s Din Djarin from The Mandalorian in a fight.

Oscar Isaac has said that his hero in Moon Knight would beat Pedro Pascal’s Mandalorian in a fight. Isaac will make his debut as the Disney+ Marvel hero, also known as Steven Grant and Marc Spector, on March 30. Brought together by Dissociative Identity Disorder, Steven, an English museum worker, and Marc, a former CIA agent, were granted powers by the Egyptian god Khonshu and take on the vigilante duties of Moon Knight. While much of the show’s story has remained a secret, it’s been teased that this will be one of Marvel’s darkest journeys yet, with a hero who doesn’t pull his punches.

In addition to joining Marvel, Isaac has also been a part of another major franchise: Star Wars. Pascal, another Star Wars actor, happens to be one of the Poe Dameron actor’s closest friends. Unfortunately, Pascal’s Din Djarin and Isaac’s Poe live in different parts of the Star Wars timeline, but that hasn’t kept viewers from wondering what a meet-up between the two characters would be like. Isaac even took credit for convincing Pascal to accept his lead role in The Mandalorian in an interview they did to promote Netflix’s Triple Frontier, which is thus far their only appearance together on film or in TV.

Now, Isaac has insisted his Marvel character could easily beat Pascal’s Star Wars character in a recent interview with Remezcla (via Twitter). Isaac was asked whether Moon Knight or the Mandalorian would win in a fight and whether or not his friend Pascal would agree with his response. Isaac was certain of his character’s victory and even added a “definitely” with no hesitation. Amidst confident laughter, he added that it “doesn’t matter if Pedro would agree” because, according to him, “that’s just a fact.” See the full lighthearted video of his response below:

Clearly, Isaac’s response was given all in good fun, but it would be interesting to see a showdown between Moon Knight and Din Djarin. Each character is shrouded in mystery once they’re fully suited and have impressive arsenals of weapons on their side, as well as a decent touch of ruthlessness to get the job done. If Din learns to wield the Darksaber in the upcoming The Mandalorian season 3, then it would be tough for Moon Knight to win such a duel without beskar of his own to combat the weapon. On the other hand, Moon Knight has already proven himself to be an impressive fighter based on the teasers and trailers provided thus far, which could prove to be a hard fight for Din. Once Moon Knight is seen by audiences, they can likely make a better judgment on this hypothetical fight, but for now, they can choose to either take Isaac’s word for it or stand alongside Pascal.

What’s known for Isaac’s Moon Knight hero, in a vein slightly similar to that of the honorable Mandalorian, is an overlying religious tie-in. Moon Knight earns his abilities directly from the Egyptian Moon God, which is what makes the vigilante nocturnal. It was Spector who received this from Khonshu following a near-death experience, with the god reviving him in exchange for Spector becoming an avatar for Khonshu. A young Din experienced a similar thing after being rescued by Mandalorians, as he grew up to become one himself as a “foundling.” While the two stories will likely be quite different from one another, the hype that has already started to build for Moon Knight may deliver a series that will make a worthy comparison between its hero and that of The Mandalorian.

Next: How Moon Knight’s Power Source Could Tie To Doctor Strange 2’s Villain