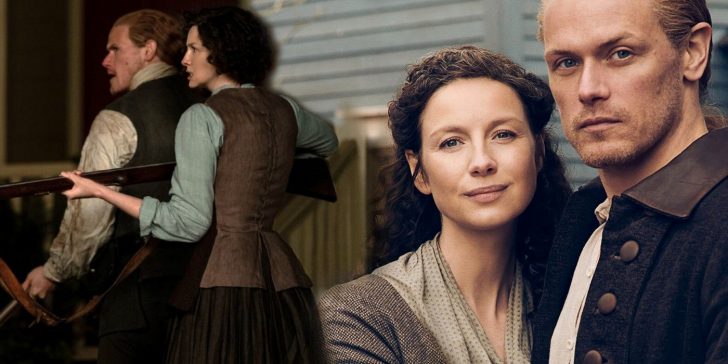 Outlander stars Caitriona Balfe (Claire) and Sam Heughan (Jamie) hint at what’s ahead for Claire after the tense but tender season 6 finale. The season was truncated due to ongoing complications from the Covid pandemic, as well as Balfe’s real-life pregnancy during the majority of filming. While normally each season of the show adapts an entire book from Diana Gabaldon’s source material, Outlander season 6 covered only a part of “A Breath of Snow and Ashes,” meaning Outlander season 7 will cover the remainder of “Breath,” and possibly all of book 7, “An Echo in the Bone.” Filming on season 7 is already under way.

The Outlander season 6 finale pitted Jamie and Claire against Richard Brown and his Committee of Safety. After a protracted shoot-out, talks of Jamie’s nine lives, and Claire mortally wounding one of Brown’s men, she surrenders and agrees to stand trial for the murder of Malva Christie. Unexpectedly, Tom Christie shows the lovers mercy and convinces the Committee to permit them one last night in their home together before they’re pulled a part and Claire is escorted to Wilmington, where she is once again accused of being a witch. Before long, Jamie is rescued by Ian and the Cherokee, while Claire awaits her fate, imprisoned, their future together lying in the balance.

Related: Outlander: Claire’s Power Is Also What Dooms Her In Season 6

In an interview with EW, Balfe and Heughan discussed the ending of season 6, and tiptoed around what that cliffhanger means for Claire. While Jamie and Ian are on their way to rescue her, the question remains of whether or not they can get there in time. Balfe had explained that Outlander season 6 finds Claire in “very dangerous times.” Read the actors’ comments below:

Balfe: “It’s very dangerous times at the moment. There’s multiple threats. There’s the threat of the Browns and all of that, but this is a time where law and order is completely breaking down. We don’t know if there’s going to be any form of trial, what that might look like, are people willing to take justice into their own hands. There’s a lot going on, so you better hurry up.”

Heughan: “Well, Jamie’s lost many of his nine lives. It’s all about allegiances and what side are you on? We see the Cherokee at least side with Jamie, interestingly, but as Caitriona said, the world is breaking down around them. You can’t rely on the traditions or the moral code that we’re used to, so who knows where salvation will come from, where rescue will come from. But Jamie certainly will do everything he can to rescue her from prison.”

Balfe makes a salient point. At this time in America’s infancy that Outlander explores, the land was governed less by laws and reason, and more by the fear in the minds of men. The Browns aren’t the only ones to fear, but society as a whole. Besides Jamie, another potential savior could come in a surprising form to some Outlander viewers, but less so to readers familiar with Tom Christie’s arc in the books. In the original source material, Tom not only steps in to take the blame for Malva’s murder, he also professes his secret love for Claire, and is condemned in her place. The show could follow this plotline, already showing hints of Tom’s allegiance in the season 6 finale as he promises to ensure Claire sees a fair trial and that Jamie will be safe.

While Outlander season 6 ended with a definite tense uncertainty, it’s highly unlikely the show would kill off Claire or Jamie any time soon, seeing as there are still several more books to adapt, and such a sudden turn wouldn’t make much narrative sense. Where the true tension lies is less in whether Claire will escape, and more in how Claire will escape. It also remains to be seen if Jamie will be her savior, or Tom, or perhaps even Claire herself. All will be revealed soon enough, as Outlander season 7 is tentatively set to premiere later this year, or early in 2023.

Next: Outlander Season 6: Which Side Are Jamie & Claire On? It’s Complicated