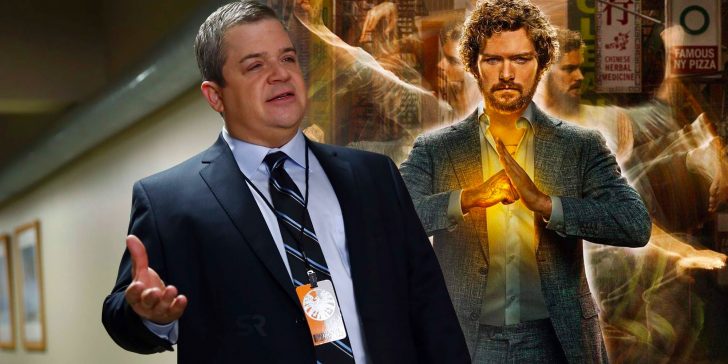 In keeping with his notorious Boba Fett prediction, Patton Oswalt looks to strike gold again with a pitch for a spinoff of Marvel’s Iron Fist.

Actor and comedian Patton Oswalt pitches a spinoff to Marvel’s Iron Fist. Oswalt is an outspoken fan of comics and geek culture who has been lucky enough to see his career grant him opportunities within that realm. Just last year, he co-created and starred in Marvel’s M.O.D.O.K. and even appeared in the mid-credits scene of Eternals as Pip the Troll. Oswalt has also appeared in Marvel’s Agents of S.H.I.E.L.D., Blade: Trinity, 2017’s Spider-Man animated series, and Big Hero 6: The Series. He will also be lending his voice to the forthcoming The Sandman series based on Neil Gaiman’s seminal comics.

Oswalt garnered attention earlier this year when The Book of Boba Fett featured a scene detailing how Boba Fett survived the Sarlacc Pit, which was eerily similar to a prediction he made on NBC’s Parks and Recreation years earlier. In a 2013 episode of Parks and Recreation called “Article Two,” Oswalt’s Garth Blundin led a notorious filibuster where he described how Boba Fett would pull himself from the Sarlacc Pit. At the time, it was simply a humorous rant from Oswalt, who could never have known that it would become canon in the new series. Now, it would seem as though Oswalt is trying to flex his prediction talents yet again.

While promoting his new film I Love My Dad at SXSW, Collider asked Oswalt if he had any new predictions to rival his foretelling of Boba Fett’s fate. He set his sights on Marvel, saying they have “an amazing franchise” waiting to be realized within their Netflix shows, keying in on two prominent characters featured through several of the shows, including Iron Fist, Luke Cage, and The Defenders. According to Oswalt, Misty Knight and Colleen Wing should star in “A low-stakes, gritty, street-level superhero noir.” Check out Oswalt’s comments below:

“I think that Marvel is going to realize that they had an amazing franchise in their laps for free in their Netflix shows with Misty Knight and Colleen Wing, those two actors. Someone in five years, hopefully sooner, will realize, ‘Do that!’ A low-stakes, gritty, street-level superhero noir with those two characters, Misty Knight and Colleen Wing. They’re sitting right there! So I’m predicting that someone at Marvel will realize what they’ve got and they will run with it.”

Misty Knight, played by Simone Missick, is an NYPD officer who made her debut on Luke Cage before appearing in Iron Fist and The Defenders. Jessica Henwick’s Colleen Wing, a martial arts instructor and expert, also made her initial appearance on Luke Cage before becoming a more prominent character in Iron Fist and The Defenders. Misty and Colleen became audience favorites, leaving a perfect setup for Daughters of the Dragon, a Marvel comics series that sees the two characters fighting side by side.

When the entire slate of Marvel Netflix shows was canceled, it dealt a blow to many loyal fans, leaving characters like Misty and Colleen dead in the water. However, it seems as though the shows may be getting a new lease on life. Charlie Cox, who first played Daredevil for the Netflix series, was recently featured in Spider-Man: No Way Home, with Vincent D’Onofrio also reprising his role as Kingpin for Disney+’s Hawkeye. In addition, the canceled Netflix Marvel shows, which also include Jessica Jones and The Punisher, are set to debut on their new streaming home on Disney+ in just a few days. With the shows being on audiences’ minds again and Charlie Cox seemingly set for more within the MCU, Oswalt’s prediction may carry some weight, even if Colleen and Misty’s return isn’t officially planned at this time. For now, audiences can hope for the best as they wait to see if Oswalt’s prognostication skills prove accurate again for the world of Iron Fist and Marvel’s Netflix shows.